How effective is the Covid nasal spray made in France? 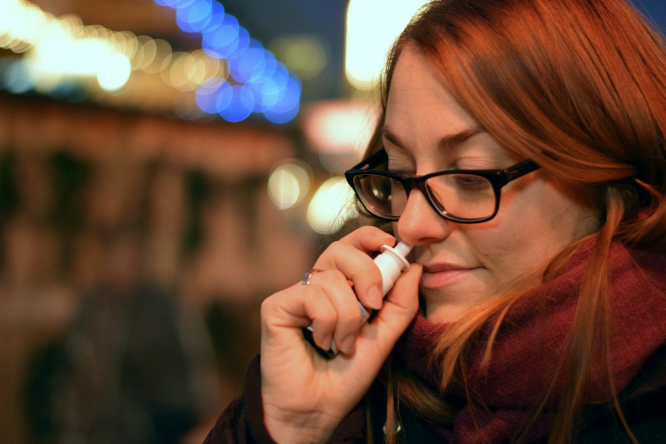 A French company is hoping to get market approval for a nasal spray that can kill Covid-19 germs in the nose. This picture is representative of a nasal spray being used.
By Connexion journalist

Reader question: I read in The Connexion about a nasal spray that kills 99.9% of the Covid-19 virus. How accurate is this? This sounds like it is more effective than vaccines.

The Connexion reported on February 14 that a French pharmaceutical company has developed a nasal spray that it says could eliminate up to 99% of the Covid-19 virus and that it hopes to have it on the market within weeks.

It has been developed by Pharma & Beauty (P&B), which states on its LinkedIn page that the spray “prevents viral spread by mechanically dislodging infectious agents in the nasal cavity, and facilitating their evacuation - and locally reduces the viral load.”

As we reported, the spray is not a treatment for Covid-19 but an extra barrier method that works as a preventative measure, alongside other precautions such as wearing a mask, physical distancing and washing hands.

We received several emails questioning the veracity of the claims made by P&B so contacted Professor Bernard La Scola, who heads up the laboratory at University hospital IHU Mediterranee Infection where it was tested.

He confirmed that his team had tested it in a laboratory setting (not on humans) but that the testing conforms to European standards.

“What we did in the laboratory is independently test the effect of ionized water on the virus which is then put back into cell culture according to European standard 14476 + A2: 07-2019,” he said.

“Indeed, this ionized water has the ability to eliminate 99.9% of the virus in 30 seconds.”

He said that his responsibility is in running the tests and could not vouch for any claims later made by the company marketing the product about its preventative effects but that in the laboratory tests the ionized water eliminated 99.9% of the virus.

In an earlier interview with Franceinfo, Prof La Scola said that the spray is “something that is going to work the moment you use it. It won’t have a lasting effect”.

He warned though that it should not be considered a substitute for wearing a mask or washing hands and that it absolutely “must not be mixed up with vaccines, which have a direct effectiveness against the virus”.

P&B states that it is a Class I medical device, meaning it has the same risk factor as instruments such as glasses or crutches.

ANSM has asked P&B to provide additional information about the product, Franceinfo reported, saying there were still questions about the “claims and performance" promoted by the company.

Airborne transmission of Covid-19 more prevalent than through surfaces

P&B’s announcement of their nasal spray comes as a new study finds that airborne transmission of Covid-19 likely accounts for more cases of the virus than from surface contact.

Researchers analysed data from a Covid-19 outbreak on the cruise ship Diamond Princess in February 2020.

They found that airborne transmission likely accounted for over 50% of disease transmission in that instance, including “inhalation of aerosols during close contact as well as longer range”.

“These findings underscore the importance of implementing public health measures that target the control of inhalation of aerosols in addition to ongoing measures targeting control of large-droplet and fomite (surface) transmission, not only aboard cruise ships but in other indoor environments as well,” the study states.

Many countries, including France, implemented strict controls to prevent Covid-19 spreading by surface contact (such as hand washing measures) at the beginning of the pandemic and waited many more months to introduce measures (such as wearing masks) to prevent airborne spread.

The research article was published by the Proceedings of the National Academy of Sciences of the United States of America in January this year.

covid-19
More from Your Questions
More from Connexion