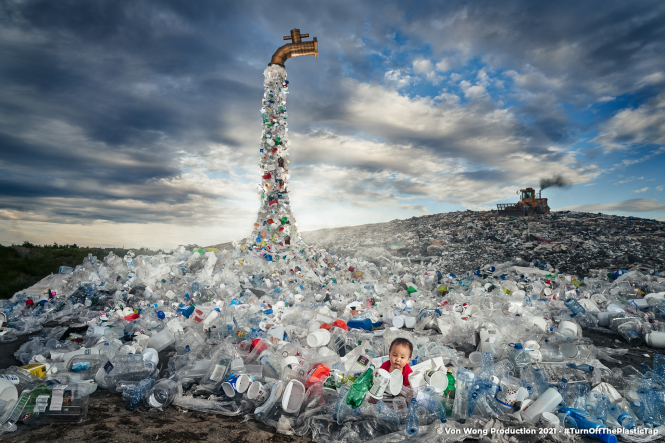 Benjamin Von Wong’s nephew poses at a landfill site in Canada where the photographer set up his Turn Off The Plastic Tap installation Pic: Von Wong Production 2021

A new art installation - in the form of a giant tap that seemingly floats in the air and spills out single-use plastics - has opened in Paris.

The aim is to raise awareness of the overconsumption of single-use plastics that pollute the world.

Several other dramatic photographs of the installation set up in various locations around Canada are also on display.

The exhibition is being held at the Canadian Cultural Centre in Paris through the Canadian embassy in France. It begins today (October 7) and will run until November 19.

The project is called Turn Off The Plastic Tap and is the work of Canadian photographer and environmental activist Benjamin Von Wong.

The project was created in Canada but is on display in Paris for the first time.

Mr Von Wong said of his project that he hopes to draw as much attention as possible to the importance of reducing plastic consumption ahead of important climate conferences such as COP26 and the United Nations Environment Assembly (UNEA 5.2).

“As an artist and activist, I’m always looking for exciting ways to make the boring problem of plastic pollution more interesting.

“Luckily for me, the Embassy of Canada in France accepted my proposal to build an art installation to raise awareness for plastics.

His campaign highlights the fact that single-use plastic consumption has increased by between 250 and 300% during the Covid pandemic.

With the help of his family members, hundreds of volunteers and several organisations and companies in Canada, Mr Von Wong set up his three-story high tap installation at several locations around the country to highlight different impacts of plastics.

It included going to a children’s playground, which was chosen as Mr Von Wong wanted to highlight the impact that plastic consumption is having on future generations.

He also set up the installation at a shipping container depot to represent how Western countries export plastics to the rest of the world, a beach to highlight the impact of plastics on the oceans, and a recycling facility to highlight the fact that only 10% of plastics are recycled.

The final location he chose was at a landfill site.

“When we throw things away into the trash can, we just assume that it is going to go away. There is no away. Away is a landfill,” Mr Von Wong says in a video promoting the project.

Mr Von Wong even enlisted the help of his newly born nephew, who features in the landfill photo (see top of article).

Mr Von Wong has worked on several large-scale art projects to highlight the impact humans have on the environment in countries all around the world.

The Turn Off The Plastic Tap exhibition will be on display at the Centre culturel canadien in Paris between 10:00 - 18:00 until November 19.

One tower per family in this noble medieval site in France
3 December 2021
More from Our Pick
More from Connexion
Get news, views and information from France
Join the newsletter
Subscribe to The Connexion