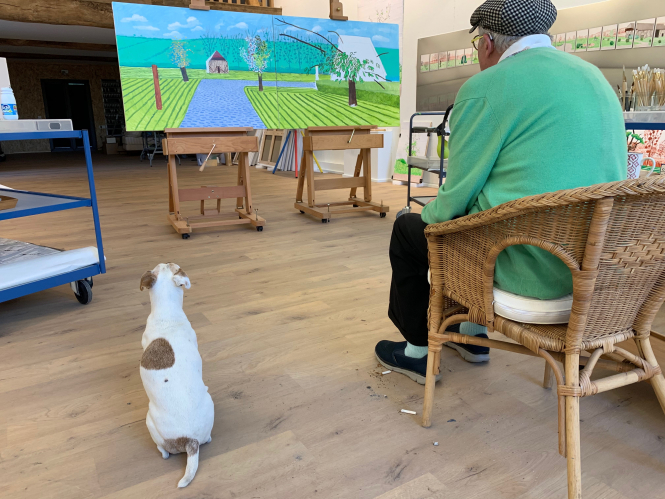 David Hockney and dog Ruby in his studio in Pays d'Auge Normandy, France
By Jane Hanks

An exhibition of David Hockney’s works painted at his home in Normandy will be on show and for sale at the Galerie Lelong & Co in Paris until the end of January 2021.

They are some of the first paintings he produced when he moved to his half-timbered home in the Pays d’Auge two years ago, with most of them depicting scenes he painted sitting outside his house; the house itself, different parts of his garden and the view beyond, full of colour and in his inimitable style.

The gallery owner is Jean Frémon who has known the 83-year-old internationally renowned artist for the past 40 years. It was a visit to Mr Frémon’s home in Normandy that gave Hockney the idea to settle in France himself.

He had previously lived in the UK and USA, but was looking for new inspiration: “He had started to complain about the lack of seasons in California, saying it was rather monotone. Now he is happy to have a landscape which is ever-changing with the seasons, but also from day to day, and even from one hour to the next.”

A long relationship with France

Mr Frémon said Hockney has had a long relationship with France.

He lived in Paris for two to three years in the early 1970s. He has a great number of French friends and his closest assistant who has been with him for 20 years, Jean-Pierre Gonçalves de Lima is French.

He thinks too, he has a similarity with the great French painters: “Like them, he has always been striving to produce images with a great clarity and visibility. In his works here we see how he has been fascinated by the Normandy light working to capture the look of the mist in the morning, or the sky.”

It is likely Hockney is here to stay for some time: “Coronavirus means he has no desire to go to Los Angeles or the UK and realises he is better protected, where he is, in Normandy.

“As long as he has subjects to inspire him, he has no desire to move on. He wants to paint all the seasons, and as it is a subject without end, he has enough to keep him occupied here for a long time.”

Hockney also appreciates the French lifestyle: “He loves the French cuisine, even surprising dishes like frogs legs, black pudding, andouillette and tripe, and Normandy dishes with cream and butter.

“He is a militant smoker and is happy to be in a country where it is easier to smoke in public than in the US. He has a hedonist side to him. He appreciates you can enjoy life more in France than anywhere else.”

Early this year, Hockney started a series of paintings studying the arrival of Spring, as he did nine years ago in Woldgate, East Yorkshire. For him the confinement period was a blessing: “He was in pleasant surroundings with everything he needed to hand and he was very happy not to have any visitors so he could work constantly. Day and night, he thinks only about painting.”

His Normandy spring studies will be on show at the Royal Academy in London in early 2021 and at the Musée de l’Orangerie, Paris in the autumn, and old friend Mr Frémon hopes they will be on show in his gallery (galerie-lelong.com) in a couple of years’ time.