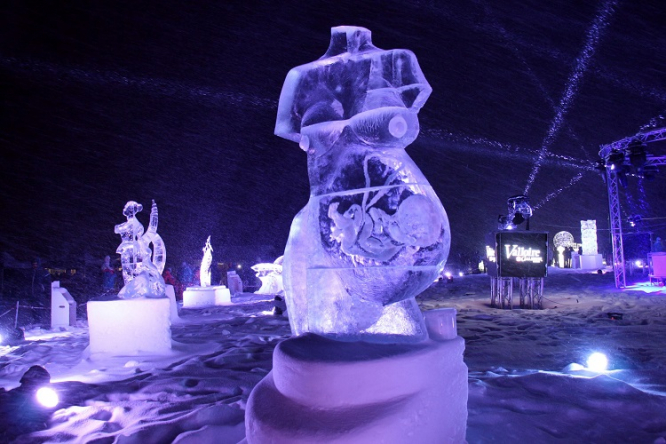 This international snow and ice sculpture competition is entering its 37th year.

Renowned ice and snow sculptors will come from all over the world to compete for prizes and to cover the landscape with their works.

There are various competition categories with different prizes to be won, including a public vote where you can support the sculpture you like the most.

To accompany the competition there is a prize giving ceremony and a torchlight parade followed by fireworks.

Marseille and surrounding areas will bring the artistry of the circus to life during this month-long festival.

With 15 different performances as well as workshops in which you can learn circus tricks, play circus games and learn about the balance of the body, there are a lot of activities to choose from.

There will also be an opportunity to get involved with backstage preparations of a new performance piece, still in its creative stages, and to meet the artists involved afterwards.

Human pyramids, somersaults, tightrope walks, juggling tricks, trapeze artists, contortionists, dancing and acrobatics are just some of the things you can expect to see.

If you are a fan of the truffle or want to learn more about them then this festival is the place to be.

There will be workshops on identifying truffles, information about which ‘black diamonds’ are best to buy and a market with fresh truffles plus items like books and living truffle oaks to view.

There will be truffle-hunting demonstrations, which take place twice a day with trained dogs in the cathedral square.

This wine-grower’s festival is hosted by different towns every year and was last held in Gevrey-Chambertin in 2000.

Now entering its 82nd year, the festival returns to the town with the largest vineyard in the Côte d’Or and a rich history of winemaking.

Wines dating from 2009 to 2017 will be available for tasting, ideally from an official tasting glass created especially for this year’s festival to mark the occasion.

The town expects to welcome an estimated 80,000 visitors over the weekend, and there will be a parade of banners and statues of Saint-Vincent, patron saint of winemakers, and tastings of wines produced for the occasion.

Charlie Chaplin, the Orchestral Man examines how the search for expression through music influenced Chaplin’s imagination and thereby all of his artistic work, from his dance and rhythm to speech and sound.

The exhibition will look at all aspects of sound, from noise, gestures and rhythms to film scores and elements of his work that speak to the eye as well as the ear, such as his silent pantomimes.

It also explores the role of the music in Chaplin’s cinematography, which he particularly emphasised while resisting the switch from silent to speaking films.

This exhibition focuses on the paintings displayed at the historic Parisian Salon of 1819. The Salon became famous for the debate it sparked over two paintings that would animate the Salons and the city of Paris for years to come.

The competition between Girodet’s Pygmalion and Galatea and Géricault’s The Raft of Medusa surfaced when Girodet’s work was highly successful amongst critics while Géricault’s was fiercely criticised.

Many of the works exhibited in the Salon will be on loan from the Louvre for the exhibition, which will also feature paintings never seen by the public before.

Visitors can experience the Salon from 1819 – the gallery has been renovated to mimic the original Louvre room.

The Bibliothèque Nationale de France has around 300 pieces on display in this unique exhibition which offers an insight into both the real and imaginary worlds of Tolkien.

Visitors can see original manuscripts and drawings by the author, as well as unpublished pages, hand-drawn maps and watercolour paintings that illustrate the fictional world of Middle Earth, as featured in The Lord of the Rings trilogy and the novel The Hobbit.

Nordic tales, medieval manuscripts and a rare edition of Beouwulf, illustrated by William Morris, will also be on display to offer an insight into Tolkien’s roots in English literature.

Photographs and recordings of poems read by the author will be available.

This classical music festival is the largest in France and this year will focus on the music of Beethoven to mark 250 years since the composer was born.

The festival will feature all his masterpieces in concert, complete symphonies, piano concertos, trios and sonatas and string quartets.

New works that have been composed by musicians inspired by his music will be performed, with genres ranging from jazz to electronica.

The festival concerts are held at the Cité des Congrès de Nantes, which houses a gift shop, a bookshop and various food stalls that will offer some refreshment before and after the concerts.

The international comic book festival will feature nine exhibitions on a wide range of content creators and artists.

Screenwriter Robert Kirkman, the creator of the popular AMC series The Walking Dead, will be the focus of one of these exhibitions.

The display will reflect on the past 20 years of his career, from his original creations to his collaboration work with Marvel and Image Comics as well as his work for TV.

An exhibition on the celebrated artist Yoshiharu Tsuge will also be featured, with displays of his original works that played a major role in the world of comic book creation.

The comic Gunnm, also known as Alita: Battle Angel, will also be displayed, tying in with the release of the film adaptation, produced by James Cameron.

The link between the physical arts and cinema will be explored in this exhibition, which is the first of its type to be organised in France.

Artists such as the Lumière brothers, Picasso, Monet, Charlie Chaplin and Cocteau will be explored.

La Grand Odyssée is the hardest alpine dog sledding race in the world. More than 50,000 spectators come to watch the race every year, which features more than 400 dogs and 25 mushers from all over the world.

Competitors race with eight or 12 dogs across ten different stages, covering up to 385 kilometres.

The race starts with an opening ceremony and fireworks and throughout the race spectators can get as close as possible to the action due to planned access points, whether you are on foot, snow shoes or skis.

There are 20 resorts, villages and towns where you can take part in various activities such as igloo making workshops, film screenings, exhibitions and talks introducing you to dog sledding.

There will also be ample opportunity to enjoy mulled wine and a hearty tartiflette around the campfire.

Organised by the Theatre du Nîmes, this festival welcomes not only Spanish dancers but also numerous artists who perpetuate Andalusian art in southern France.

The festival will include singing, dancing and guitar music, as well as talks and classes with the biggest names in the world of flamenco.

It is one of the biggest flamenco events in France – and so not to be missed!

This festival aims to bring together all those, from all over the world and all walks of life, who love adventure.

Five guests will be present at the festival to share their experiences of travelling, as well as their tips on how to better immerse yourself into foreign cultures.

There will also be films shown about adventure and travelling. The festival is organised by the association Aventure du Bout du Monde (ABM), who created the event to try to inspire and encourage people to explore the world around us.

The Connexion works with local tourist offices for the information on this page.

Due to possible last-minute changes to programmes and event timing we recommend that you always check with individual organisers before making a trip.