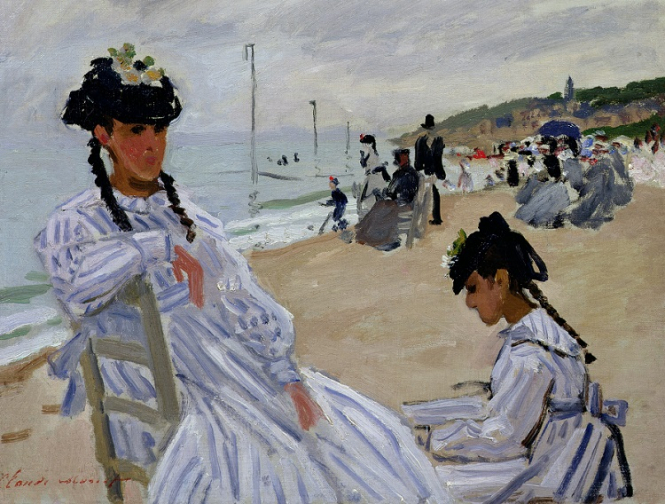 Painting by Monet
By Connexion journalist

This exhibition traces the history of plein-air painting, from the 18th century up until 1873, the year before the term ‘impressionism’ was invented.

However, painting outside was not an easy practice, as the artists had to transport all of their equipment to their chosen location.

They also had to work quickly, as the natural landscapes around them were constantly subject to change from weather conditions and shifting light patterns.

About 80 works will feature in the event, from artists such as Monet, Joseph Mallord William Turner and Camille Corot to those of the Barbican School.

This festival brings together international and national authors, people from the publishing world, actors, musicians, critics and the general public to share fictional worlds together.

Events unfold over four days, during which you can take part in a host of activities such as readings by actors, meetings in bookshops, a booksellers’ market, book signings and much, much more.

A unique part of the festival is the Cabinet of Curiosities, which now holds over 170 objects, brought by authors from all over the world who are invited to add something to the cabinet.

This gourmet hike features three different routes of 12km, 18km and 21km, during which you can enjoy delicious cheese and wine tastings at each ‘buron’ resting point along the way.

The burons are traditional Auvergne shepherd’s huts, where you will have the chance to meet the breeders of the sheep found in the region.

All three routes join up in the village of Aubrac where tired hikers can enjoy a traditional, three-course dinner at the Royal Aubrac, an imposing former sanatorium-turned-spa-resort.

For over a month, the Principality of Monaco will be alive with music.

Every weekend, several concerts will take place in venues such as the Auditorium Rainier III, Monte-Carlo Opera, the Oceanographic Museum as well as outside Monaco, in Beaulieu-sur-Mer, Menton and Nice.

There will also be art installations and an Inuit exhibition in Monaco itself.

It is a great event to visit prestigious venues while discovering new artists and composers.

Vélo in Paris is an weekend-long event dedicated to all things bikes. If you're passionate about two-wheelers, take yourself to the 12th arrondissement and spend a day testing out all types of bicycles; electric, mountain, city cruisers, and more.

This exhibition will look at the theme of bathing in Picasso’s paintings, with counterpoints from the 19th century artists who influenced his work on the subject.

Other contemporary artists who have used Picasso’s work as a source of inspiration on the theme will also be presented.

For enthusiasts, collectors, professionals or the curious, this festival is petrol heaven.

Around 3,000 cars are on show for the event, while there are 500 different stalls to explore during the three-day festival.

With over 50,000 visitors every year, Avignon Motor Festival has become one of the most important European salon of vintage cars.

There will be a wide range of activities, demonstrations, a show of never-seen-before cars, as well as an exhibition of tractors, and a military camp.

It will also be the occasion to celebrate the 50th anniversary of Ligier JS2 racing car.

This music festival offers various activities all based around the theme of contemporary music.

Along as a great number of concerts, there will be activities for younger people, as well as exhibitions, conferences and fun challenges for everyone to participate in, plus there will be shows for children.

While you are waiting for the Tour de France, the Tour de Normandy will take place, departing from Ouistreham and finishing in Caen.

It has since showcased many two-wheeler talents, including world champion Thor Hushovd, Jérôme Pineau, Edvald-Boasson Hagen, and Christophe Riblon.

For the 40th edition of the tour, there will be seven stops across the five departments of Normandy, including stops in Vimoutiers, Le Neubourg, Nonancourt, Argentan, and Carentan les Marais.

This year, the race is expected to be more difficult on the last stage.

Mythos is an arts and speech festival that focuses on all forms of storytelling, from singing to rap to spoken word and poetry.

This festival offers a succession of shows, including plays, lectures, movies, concerts, and readings of different styles and themes.

Some famous artists will take part in the festival.

Peter Doherty (pictured left), Lou Doillon, and Gaëtan Roussel will perform while former rapper and actor JoeyStarr is expected to go on stage for a play with Jérémie Lippmann.

Alongside the arts festival, there also will be a food festival named Les Toqués de Mythos for the whole duration of the arts event.

Visitors are invited to discover the delicious food made by French chefs or can have a quick snack in between shows.

Known as the Alpine Venetia, Annecy has long been linked to the Italian city of Venice and its traditions.

The festival started in 1996 when an Italian club went out for a day wearing Venetian masks.

The following year more than 40 people joined in and it is now one of the biggest events to take place in Annecy.

Contrary to a normal carnival, there are no floats or marching bands, just people dressed in costumes walking the streets of the city’s old town before being invited onto the stage set up by the lakeside.

The event features hundreds of people in full Venetian carnival dress, as well as parades, conferences, exhibitions and concerts.

Three nights are organised by the association Swingtime to dance and show your best ‘swing’ over the weekend.

It starts on Friday and Saturday with tunes from the Twenties to the Fifties. The music will make you travel in time and to different places, from New York to New Orleans.

They will throw you back to the atmosphere of the jazz clubs from the 1930s. Along with the music nights, the festival also offers dance classes with teachers from all over the world, notably from Spain, the US, the UK, Greece and Russia.

Every year the ancient town of Sarlat celebrates its mascot animal, the goose.

There will be stalls where you can taste the food on offer, such as the traditional local delicacy ‘soupe carcasse’.

There will also be traditional music as well as workshops and demonstrations for all ages.

The main event of the festival is the great banquet, as well as the parades of geese which can be found waddling through the old streets.