What's on in June 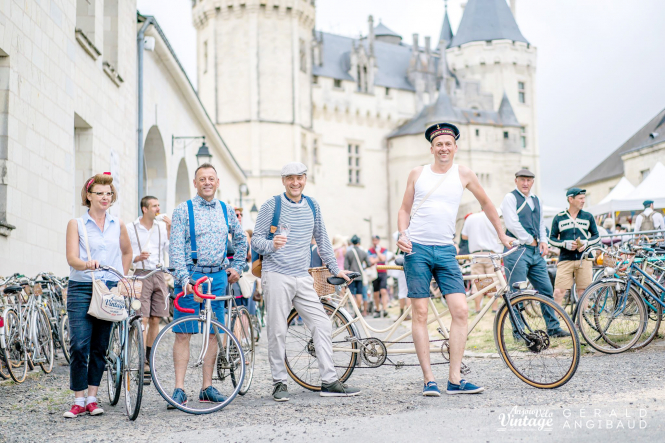 A retro bike ride in chateau country
By Connexion journalist

Dig out your tweed flatcap or pencil skirt, trim that moustache and enter the spirit of yesteryear from the comfort/discomfort of an old bike. The annual Vélo Vintage festival based in Saumur is primarily a low-key, gentle cycling event through the marvellous Anjou landscape, and has routes ranging from 30 to 120kilometres to suit all levels of fitness and speed.

Beyond bikes, it is a celebration of all things vintage, with stalls selling vinyl, live music, local traditional specialities and a glass of fizzy Saumur wine. A great day out for friends and family: book a bike and register now.

This year, the Annecy International Animation Film Festival received over 3,070 films (short and feature films, TV and commissioned films and graduation films) from all over the world, and from them more than 200 have been shortlisted to take part in the official selection.

While filmmakers and animators are here in a professional capacity, to find funding, meet musical composers, etc, the public can attend screening events, including sneak previews of shorts
and features. See website for details.

For food-loving residents or visitors to Brittany, this gourmet meeting in the magnificent setting of the Château de Quintin, Côtes-d’Armor, is a must-visit.

The Unesco World Heritage site in Seine-et-Marne has held one of the biggest medieval festivals in Europe since 1984, inviting you on an unforgettable journey to the Middle Ages.

Enjoy all aspects of olde worlde France, from full-scale historical re-enactments to camps set up at the foot of the ramparts, plus dancers and jugglers.

Dedicated to films in the pure romantic genre as well as those with elements of romanticism, the annual Cabourg film festival in Normandy is the place to be to set hearts a-fluttering. Prize winners are given a statuette of a pair of  intertwined golden swans, which are specially crafted by La Monnaie de Paris.

Now in its 32nd year, the festival lays on public viewings in both indoor and outdoor locations of full-length and short films. This year’s jury is headed up by director André Téchiné.

Some of the secrets of the past and France’s hidden riches are being revealed around the country, with many towns opening special archaeology ‘villages’ to publicise several different sites at once.

Formula One returns to France after a
10-year hiatus with Circuit Paul Ricard at Le Castellet, near Bandol in the Var, hosting the race.

The track can trace its F1 origins back to the early 1970s, when it held the first of its 14 French Grands Prix. Since being awarded the 2018 race, numerous modifications have been made to both the circuit and its setting to ensure a suitably stern challenge for the drivers – who are expected to reach a top speed of 344 km/h on the Mistral straight – and an equally thrilling spectacle for race fans.

Every year since 1982, each year on summer solstice day, musicians (both amateur and professional) and music-lovers have taken to the streets, public gardens and courtyards of France to play music of all genres and traditions in the annual celebration of sound.

It is organised by the Culture Ministry to make concerts accessible to all, with events taking place all day and night. In 2017, 120 countries around the world joined in.

No instrument sounds quite as evocatively, quintessentially French as the accordion, which is perhaps why the people of Tulle in Limousin celebrate the splendour of the squeeze-box every year.

This is the 30th anniversary edition, with musical performances everywhere imaginable around town, from streets
to terraces, cafes to public squares,
marquees to concert halls and theatres.

The event attracts a wider repertoire of performers than you might imagine, with rock, jazz and world music represented.

Eugène Delacroix’s July Revolution depiction, Liberty Leading the People, is among the Louvre’s – indeed France’s – best known paintings, but a new exhibition seeks to brings many more of the French artist’s oeuvre to public attention.

180 pieces are on display, ranging from the young artist’s big hits at the salons of the 1820s to his final, lesser-known pieces.

Delacroix’s last full retrospective exhibition in Paris dates back to 1963, the centenary year of his death – meaning this is a rare chance to see so many pieces by the French Romantic artist in one place.

Both festive and militant, la Marche des Fiertés is one of the capital’s biggest open-air events and France’s largest and oldest pride march. Everyone is welcome to join in – there is no hard-and-fast distinction between marchers and spectators – and it is claimed that over half a million take part. It will start at 14.00 in central Paris and it ends with a free concert. It also ties in with two weeks of cultural events in the capital called La Quinzaine des Fiertés.

Since 1946, Les Nuits de Fourvière has been bringing together the disciplines of theatre, music, dance, opera, circus and cinema every summer, and this year will see 60 performances in the spectacular Gallo-Roman theatres of Fourvière.

One for horse lovers! Domaine de Chantilly will host its first exhibition devoted to the birth and the development of horse racing art. Some 70 artworks (paintings, drawings, sculptures, photographs and films) will illustrate the way the sport was used as a barometer
of modernity, in both England and France, from the late 18th to the late
19th century.

The pâtisserie industry brings in a mouth-watering one billion euros every year in France, such is the universal appeal of lovingly crafted cakes and pastries from local bakers and chefs.

The Salon de la Pâtisserie is a major event for both creators and devourers, a place to showcase the talents of artisan cake makers and flavours from every French terroir. As well as providing amateurs and professionals a place to share knowledge and recipe innovations, it also allows members of the public, including children, to get their hands dirty by creating their own pastries. And needless to say, there are ample opportunities to sample the sweet delights made on site.

The event’s honorary president is iconic macaron maestro Pierre Hermé, who inspired a whole new generation of sweet and savoury craftsmen and has helped turn pâtisserie into an art form.
www.lesalondelapatisserie.fr

Set in a Provençal mas amid a forest on the stunning island of Porquerolles, Var, the Carmignac contemporary art foundation opens its doors to the public in June.

Created by French investment banker Edouard Carmignac, the new space will feature contemporary works of art from his own collection – with a focus on American art from the 60s to the 80s including Andy Warhol, Roy Lichtenstein and Jean-Michel Basquiat, along with Gerhard Richter and Willem de Kooning – plus temporary exhibitions, plus a lively cultural programme.

Outside, a 15 hectare garden designed by landscape gardener Louis Benech

is inhabited by a series of works inspired by the locale.