Our Writers and Artists’ competition: the winners! 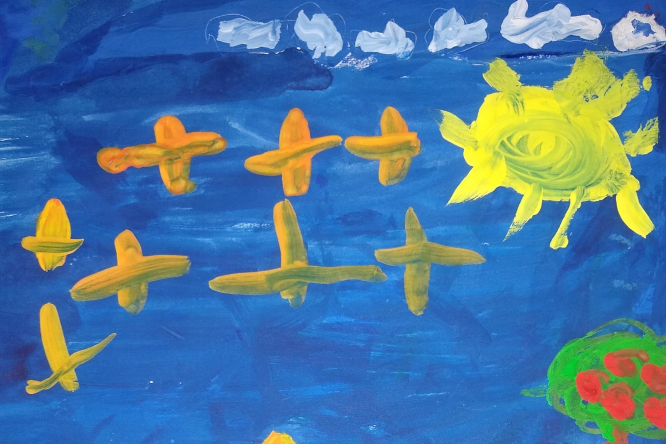 Discover the winners of our Writers and Artists’ competition!
By Connexion Journalist

We would like to thank each and every one of you who entered the Writers and Artists’ competition published here on our website in April.

Following the success of our Room-Sized Travelogue challenge – we offered budding writers and artists the chance to win a book of their choice from the Writers’ and Artists’ Yearbook series. We asked you to get painting, drawing, sketching and scribbling on any subject of your choosing. We were overwhelmed by the number and quality of the hundreds of responses. You made choosing a winner in each of the four categories – best writing for adults; best writing for children; best artwork for adults; best artwork for children – a very pleasant headache to have!

Each of the winners will receive a copy of a book of their choice from the Writers’ and Artists’ Yearbook series. The Writers’ and Artists’ Yearbook is a go-to resource for writers of all styles. The books include advice from published authors, contact details for agents, publishers and much more. Artists can also find all sorts of help and advice about honing their craft and getting published at the yearbooks’ website.

Artist Peter lives just 10 minutes from the beautiful location in the Creuse that he captured in paint here. He described it as: “A good place for painting, fishing and gathering mushrooms in autumn.”

Linda, who has lived and worked in France as a translator and teacher for 30 years, said: “Like many of us still feel now, I was affected by the upheaval of the sudden COVID-19 lockdown in mid-March and its repercussions on society and the economy. I enjoy writing and, as such, I transformed my ideas and thoughts into the short story."

Amon awakens to what seems to be a normal Spring day. But something is different. He can’t put his finger on it. That’s just the way it is. He wonders if he is still asleep, because he was in the middle of a strange dream with family and friends, but woke up before it climaxed, and now can’t remember much of it at all. His ears tune in to the sounds outside his window, while his eyes remain closed, relaxing in soothing darkness. Birds are singing, and ducks are quacking as they fly over the house, their wings flapping in the wind….

A solitary bee or wasp buzzes in the distance…(Is it that time of the year already?, Amon asks himself.) This mysterious silence makes Amon want to open his eyes, yet he resists the temptation. It is a silence rarely heard in this part of the world on a Friday morning….when many people are normally busy driving to work, or taking their kids to school. But there are no children going to school, because the schools are closed.

In fact, he will soon discover that there are no children in the parks – no enthusiastic squeals, impatient crying or peals of laughter, because the parks are closed. And where are the cars? No honking, no brakes screeching, no traffic jams, no accidents – just a silence spreading freely, never to be broken. Okay, it’s time to have a look. So Amon takes a peek outside. His eyes are first drawn to the ground as he sees an industrious snail, sliding its way through the yet uncut, virgin-green grass. Then, a bright red, black-spotted lady bird catches his attention. Steadily climbing up the stem of a newly-sprouted Spring flower, it is unaffected by the penetrating silence.

Where are the people? Why is it so quiet here? Late last night, he returned from a retreat in the mountains, and now still has visions of the snow-covered landscape in his mind. Back home, the sidewalks are deserted except for one or two stragglers walking at a certain distance apart. What’s going on?

The line to the pharmacy is never-ending with a sign on the door explaining that masks and alcohol-based gel are out of stock. People are standing away from each other, as if an invisible barrier is creating this distance. Luckily, he doesn’t need to go there. But this is his first day back, and Amon has run out of bananas. Why not have spaghetti for lunch, he suggests to himself. So he walks to the supermarket. Why are there so many empty shelves?

“I’ve never seen people buying so much – especially pasta and toilet paper – as if they wouldn’t be able to shop again for a long time,” Amon says to himself. “Why are some people wearing masks and latex gloves? Is this a new fad?” he wonders. The town hall is just across the street, so he decides to try to find a staff member who can brief him on what he seems to have missed over these last few weeks. But it is closed to the public, even though he can see employees through the glass door in the distance.

This silence is not uncomfortable, but Amon feels as if this day is missing a punch line – the first day of Spring, in fact. For several weeks now, he has been on a work Sabbatical. From the minute he left his office, he turned off his mobile as part of an experiment. How would he react to cutting this virtual umbilical cord out of his daily lifestyle? Amon also turned off his computer; so, with no landline available in the remote chalet he had rented, nobody could reach him, either physically or electronically.

To top it off, Amon even kept the radio off in his car on his drive to and from his hideaway at 1,600 metres; so he was literally disconnected from any news – fake or real – during these last few weeks. Thinking to himself, he says, “I must admit, it took me nearly a week to wean myself off of my phone and computer, but because I was on my own and not in contact with anyone else, I now realise that the reality of the outside world was invisible to me.” To put things into perspective, at that stage in Amon’s life, the media had begun to talk about a viral outbreak in China – but it wasn’t being taken seriously on this side of the planet….

Back to reality: He decides that it’s time to take the plunge, so he buys a newspaper in the supermarket. And lo and behold, he learns the truth of this silence. All museums and restaurants are closed. There are no more cinema viewings. What else? A curfew in Nice. A lockdown in Italy, Spain, Germany and France. And markets worldwide are on a roller-coaster ride. Amon slowly walks back home and turns his computer back on. After skimming the newspaper, he is drawn like a magnet to the Internet, and immediately bombarded with endless tidbits of information. Hidden away in his own self-inflicted silence those last few weeks, little did Amon know that a tiny particle was, and STILL is, on the loose.

Unprecedented, this hyperactive and highly-contagious virus has begun to shut down the everyday livelihood of as many hosts as it can feed on. Invisible to the naked eye, it permeates a surreal silence that Amon is experiencing right now, forcibly confined to his home in a virtually, virtual world.

Hidden under the railways tracks was a different world. What started out as a couple of wooden stalls, now stood as a booming marketplace. It was an ever-changing underpass, new stalls replacing others every day, with the exception of few that were now permanent wooden structures.

Before even entering this hidden secret, you would be able to smell the fresh fragrance of fruit and vegetables, the stench of meat hung on hooks, the stir-fry of the stall next to it, the steam of rice, the chippings off a wooden bowl, sugar being turned into caramel . Sweet, spiced and salty fragrances would waft through the air to create a mouth-watering aroma, enticing you in.

Visitors were enthralled by the organised chaos of it all; expert hands thinly slicing smoked ham, hunks of cheese being carefully wrapped in old newspaper, delicate fingers trailing over peaches to find the ripest, the soft touch of white cotton dresses, the stunning vibrance of vegetables nearly glowing against the dark background.

Giant round lanterns hung from the metal structure of the railway, illuminating as best as it could the stalls beneath it. They sometimes flashed black when a train passed overhead; the sound being less of a deep rumble, more a clatter of pans being thrown at each other.

Sometimes a band would come and busk, barely audible over all the excited chatter of the buzzing crowd. Among all the voices, sausages sizzled in their pans, lettuce crunched as it got sliced, baskets creaked when full, morning-caught crabs and lobsters splashed around, horses stomped their metal hooves impatiently, faint clinks of a hammer puncturing leather coming from the little craftsmen shops dug into the massive stone pillars that held the heavy, high seated ceiling.

Children ran ecstatically through the labyrinth of bodies, giving chase and shrieking merrily. The market was a haven, safe from wind, rain and the outside world.

In between the maze of stalls, tiny passages snaked between buildings to deposit commuters with full bags to their homes. The one path that led to the outside world was a fat twisting alleyway, too small to be considered a proper path, where a small bustling café had nested itself in a corner. It was a secret world that only inhabitants knew of, rarely stumbled upon strangers.

Read more: where to buy property in France: Moulins

Amy’s mother, Sarah-Jane, said: “As part of lockdown homeschooling we’ve been planting seeds, watching them grow, making a planting plan and looking at how other artists document flowers and gardens. Amy liked Redouté’s illustrations and was inspired to draw a daffodil from our garden in a similar style.

Read more: how to build a cosy hedgehog cabin

Ava, who visits France regularly to see relatives, said: “My inspiration was the fact that they are my favourite mythical creature and I like reading about them. I was also bought a soft toy unicorn by my
grandad when I last visited Monaco that I love very much.”

If you do then you are right,

They run and play and swim and fly,

while you close your eyes at night.

If you don’t then you are wrong,

They gallop through the herd,

And sing their lovely song.

They put the colours in the world,

They make the sun and snow.

Read more: the real history of Mother's Day in France