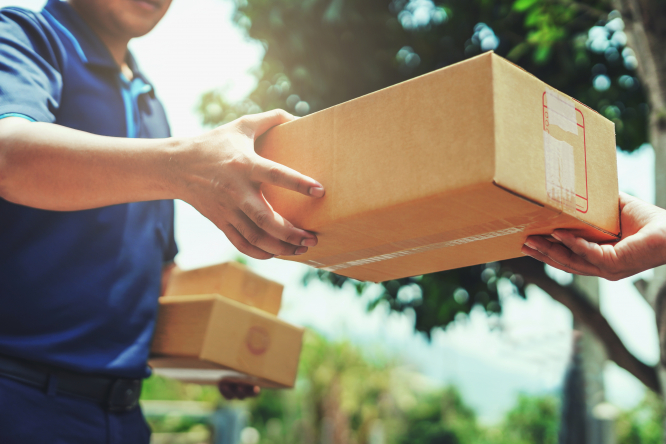 Many people have reported having to pay postal workers to receive gift packages Pic: lovelyday12 / Shutterstock

Problems with high fees and taxes being charged on gifts arriving in France from the UK and other non-EU countries are linked to errors by postal workers, French customs officials say.

The Connexion has heard from dozens of readers who report unexpected fees being charged by the postman/woman in order to receive items that were posted as gifts from countries such as the UK, New Zealand and Canada.

Read more: High tax and customs fees on gifts sent from outside the EU

Contacted by The Connexion, the French Douanes (customs) service also reports receiving many complaints about this.

When can parcels legitimately incur taxes and fees?

Gifts under €45 are not meant to incur any French import VAT or customs duties. If an item is worth more than €45, both may apply, with VAT at 20%, plus duties at around 0-22% depending on category of item if not shown to be made wholly or mostly in the UK or EU.

On top of this, where La Poste, or another delivery service, incurs costs in advancing VAT/duties at the border, they often bill the recipient an admin fee in addition to reimbursement of the taxes they paid.

Adding to the confusion for some readers is the fact that they were asked for payment to receive the item without receiving an invoice giving a clear break-down of what they were being charged for, whether VAT, customs duty, or admin fees.

Why are problems occuring now?

According to senior customs official Xavier Pascual of the Direction général des douanes et des droits indirects, the problems are mostly due to administrative errors which have been arising linked to a massive increase in customs formalities this year.

He said the latter is due to new EU rules from July 1, 2021 which removed a VAT exemption on items from outside the EU valued under €20 and thus increased the formalities regarding small-value non-EU packages.

“With all parcels arriving from outside the EU, the default principle is we now assume they are commercial and that VAT has to be applied. The exception is person-to-person parcels with no commercial character, ie. a gift, and in that case there is no tax up to €45.

“What’s changed since July is that now La Poste or Chronopost, DHL etc. has to declare to the Douanes if it is commercial or if it falls into the exception category.

“If the sender filled out the paperwork correctly and if La Poste has made the right declaration to the Douanes there will be no tax on small-value gifts. But if La Poste forgets to declare that it’s a gift, then usually we will tax it.

“In that case La Poste pays the tax upfront to the Douanes, and then recuperates it from the recipient, and also can choose, as a commercial decision, to bill some admin costs.

Transport companies usually list this as frais de gestion [admin fee], but La Poste often has the bad habit of calling it frais de douane [customs fees], whereas it’s nothing to do with us.

“We are receiving a very high number of complaints, and what seems to be happening, from cases reported to us, is that even where it was declared by La Poste as a gift under €45 and there was no tax, La Poste is billing frais de gestion, whether intentionally or unintentionally because there’s a problem with its IT system, even though they have not had to deal with any taxation or advance anything.”

In summary the Douanes believe charges may occur:

Mr Pascual added: “Big delivery companies like Fedex and UPS were already used to working with business customers and making declarations to the Douanes and for them it’s not been such a big change since July 1. But La Poste was usually making no declarations to the Douanes. The customs officials used to have a look at parcels from time to time, but the rules weren’t as strict.

“Now La Poste, which also deals with much higher volumes than the other transporters, has all this responsibility of making these declarations to the Douanes.

“It’s been a huge job for La Poste and it appears that everything isn’t quite ironed out yet. Plus Brexit came along at the same time as these new rules for sending from outside the EU.”

Do customs officials sometimes query – or change – a declared value?

Mr Pascual said it can also happen in rare cases that a customs official decides to inspect an item and believes it to have been fraudulently declared as a gift, or undervalued.

“If a new iPhone is stated to be worth €10, or there’s an invoice, or the sender isn’t a member of the public, it’s going to raise questions,” he said. “But in the opposite case, if it’s between two members of the public with the same name, it’s obviously likely to be a gift.”

He said the irregularity would have to be quite flagrant – not just, for example, that the official suspects that an item valued at €40 is really worth €50. If that is the case, the customer would be contacted by the Douanes about this, not just by their postman, he said, so he does not believe this is the source of most of the recent problems.

He said people can contact Douanes Info Service on 0800 94 40 40 for help, however they suggest addressing queries to La Poste as a priority. Keep any packaging or receipt you received with the item as proof.

“It’s La Poste which can, perhaps, offer a refund, because we at the Douanes are not asking for money. We’re sorry about it because it’s giving a bad image, but the solution is more likely to come from La Poste.”

What does La Poste say?

A La Poste spokeswoman said if VAT/duty is payable, then La Poste levies a fee of €8 if the item is delivered in person or collected at a post office.

An alternative is if the tax is paid online on La Poste’s website. This is possible for example if you received an avis de passage note because you were out, inviting you to collect the parcel from a post office; in this case you enter the avis de passage number at the website.

You will also be invited to pay upfront online by email from La Poste if the sender abroad provided full recipient contact details including your email, she said.

La Poste’s fee if paying online is €2 or €5 depending on the category of parcel.

She added: “Sending gifts between members of the public is tax-free where the items are worth under €45. However, as the procedures are mostly done using IT, for obvious reasons of efficiency and fluidity, errors are, despite everything, possible.

“Note also that errors can be made by the sender in filling out the forms when sending the gift.”

She added that “we send out regular reminders to all our distribution teams and post offices” about the procedures” with regard to low-value gifts.

Any issues can be raised on their customer service helpline 3631.

The spokeswoman said that for any payment made to La Poste, it is possible to obtain an invoice, detailing the amount of customs taxes and of frais de gestion from La Poste, at this link.

20 hours ago
5
France reopens to UK tourists: Rules for adults and children