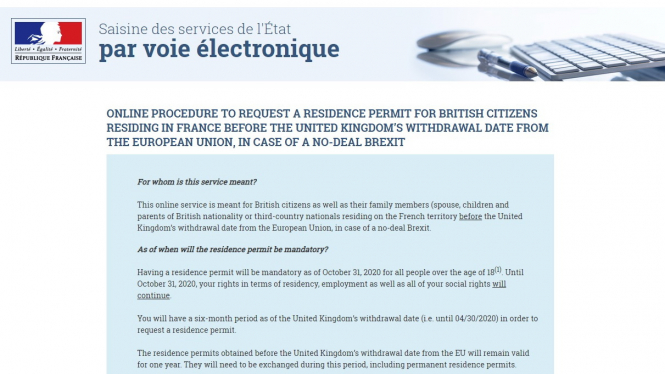 The Interior Ministry has clarified that there is no urgency for Britons living in France to use the new site to apply for a carte as applications made at this stage will not be processed until a possible no-deal is confirmed and the date it enters into application arrives. This is not stated on the site, which may be visited by going to this page and clicking the Brexit option.

A spokesperson said it is not a test site but has been launched as part of France’s preparations for a potential no-deal Brexit, which is the current default position, at the end of this month on October 31.

“We can’t issue a third country carte de séjour in the name of someone from a country which is still in the EU, so nothing will be done before that,” a spokeswoman for the section of the Interior Ministry section dealing with foreign people’s residency, the DGEF, told Connexion.

The reason for the site, which is available in English and French, is to centralise and simplify the application process in view of the fact that Britons would be obliged to apply for cards within six months of a no-deal Brexit. They would have a further six months to obtain the actual card.

After that legal residency in France would require Britons to hold a card; until that point all their residency and work rights, and related social security rights, would be maintained as now.

“We want to reassure British citizens that we’re ready and we’re going to do all we can so they can maintain their rights and we have services ready for them. We want to simplify things as much as possible,” the spokeswoman said.

One Briton who used the site yesterday to apply to exchange his EU citizen’s card for a future third country non-EU card told Connexion it took him 10 minutes and was straightforward.

The ministry spokeswoman has asked for feedback on improvements that can be made to the site to be forwarded on. Please send these to news@connexionfrance.com

As explained in a French governmennt decree made in April there will in the case of a no-deal be a simple swap for those who already have a carte de séjour – séjour permanent as EU citizens (also referred to as a 10-year card). This is allowed for on the website.

Everyone else will need to submit additional documents although those who already have a short-term card as an EU citizen may use this instead of supplying another document attesting to the start date of their residency in France.

Other people are asked to supply a document such as a rental contract, notaire's attestation of property purchase, home insurance policy or work contract.

The website also asks everyone for the 'date you moved to France' in another section of the form. We assume these have to match, but have asked the Interior Ministry if they can confirm this is the case.

Connexion understands that there is no specific provision for those who have applied already for an EU card but not received it yet, for example to ask for the same documents to be used.

Documents can be submitted as PDFs, JPGs or PNG files and can be either scanned or photographed (as long as the information is clearly legible).

After using the site to apply, applicants are emailed an attestation de dépôt as proof of their application.

In the event that a no-deal Brexit occurs, dossiers will be forwarded to people’s prefectures, who will then propose an appointment for a visit to give fingerprints and photographs and pay the €119 fee (reduced from €269 for the same cards for other non-EU citizens). Cards will be posted to people's homes.

The DGEF spokeswoman said: “France had pledged to get ready [for a possible no-deal Brexit] – in the ordonnance law, followed by the decree. So this site complements all of things that we will be doing to simplify things for British people in France in the case of a no-deal Brexit.

“The Prime Minister had announced that we would have a dedicated online application which allows them to have just one prefecture visit – for fingerprints – and then they will receive their card at home [in the post].

“We are showing that France is ready for the worst-case scenario, which would be a no-deal Brexit on October 31.

“They can apply as of now, though nothing will be processed until the UK has really left. And there is no urgency because they would have six months to apply after a no-deal Brexit and a year to obtain a card.

“There is no need to rush as the final decision on Brexit has not been taken yet.”

If Brexit is delayed again then they would keep the dossiers aside until it happens, she said.

Asked what they would do with the files in a Brexit with a deal, the spokeswoman said the details are not available, however ‘no-deal’ is a ‘worst-case scenario’, so requirements would be simpler if there is a deal.

She added they plan a wider communication campaign on the process as soon as Brexit has taken place.

The spokeswoman said everyone should use the new website for applications if possible however, exceptionally, it will still be possible to apply directly to prefectures if for example people have no access to the internet.

We outline the different type of no-deal non EU cards which are issued and requirements relating to income and other factors in our Brexit and Brions in France digital PDF guide, available at this link.

There is also French government information for Britons at brexit.gouv.fr