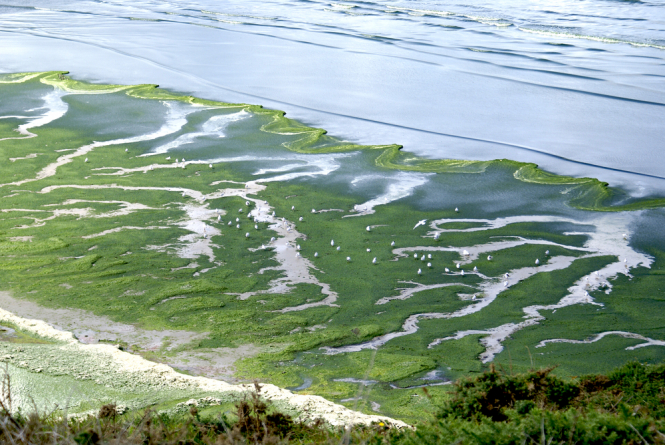 The algae on the coast can cause ‘rotten egg’ smells, and can also be dangerous to animals and humans Pic: Southmind / Shutterstock

Ecology campaigners are hailing a “historic victory” after the French government was ordered to take extra measures to fight green algae on the Breton coast.

On Friday (June 4), the administrative court of Rennes ruled that “extra actions must be done to sustainably restore the quality of the water in Brittany” and to “prevent the phenomenon of green tides as much as possible”.

Green algae, some of which is present normally, becomes far more prolific due to nitrates released into the water by farmers, whose pesticide pipes run off into seaside rivers and coastal flues.

The algae can cause ‘rotten egg’ smells, and can also be dangerous. It generates hydrogen sulphide, a noxious gas that has already killed horses and wild boar, and is also considered to be a risk to humans.

Campaigners say that there have been several cases of human deaths that are directly linked to the algae, including Thierry Morfoisse, who died in 2009 while transporting green algae in Binic, Côtes d’Armor; and a jogger in 2016, whose death is also thought to be connected to the issue.

The court has now ruled that the state must take measures to "control nitrogen fertilisation and the management of agricultural land" upstream of beaches where green algae proliferate. It also called for a “precise definition of a mechanism” to enforce the measures.

These measures must be taken within four months from the court’s notification of Ecology Minister Barbara Pompili, it said.

Alain Bonnec, president of Breton water association Eau et Rivières de Bretagne, which had brought the case to court, said: “It’s a historic victory. But there has [already] been so much time lost. So many millions of euros invested against green algae lost, due to a lack of regulation.”

Mr Bonnec said that the association is now “waiting for the prefect to take stricter measures to protect water sources [in Brittany]”.

The group, which launched a petition against green algae in May, held a march on the same issue in Lorient, Morbihan, yesterday (June 5).

Around 700 people called for better and more effective measures to be taken across Brittany; and symbolically placed their heads ‘in the sand’ to show their opinion of authorities’ actions so far.

Another campaigner, André Ollivro, said: “We have to reinvent the farming model, but we’re not doing it. We continue to authorise green algae to spread.”

Along with Eau et Rivières de Bretagne, Mr Ollivro is calling for measures against green algae to be taken across the region, and not just in the eight bays currently targeted for action.

A local farmer, Yann Yobé, who has an organic cow farm and chairs a committee set up to address the situation, admitted that there is more work to be done.

He said: “[Already] 22% of farmers in the area have gone organic. The profession is making progress, and the levels of nitrate are going down. The problem is it’s not enough.”

The problem of green algae has been on the agenda in the region for years. In 2012, the European Commission accused France of not doing enough to fight the pollution; a year earlier an initiative had suggested a solution that the toxic algae could be used to fuel power plants.

In 2017, the algae was also blamed for an ‘invasion’ of spider crabs on the Breton coast.