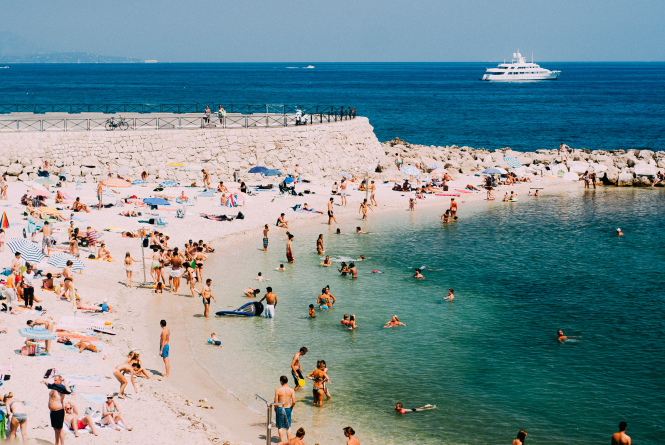 As French beaches reopen to the public, a new report says 79.5% of natural bathing water in France is excellent quality
By Joanna York

As beaches reopen after confinement, the cleanest beaches and ports in France were announced yesterday (June 9).

In total 401 beaches around France were recognised, with 173 on the winners list (palmarès) for their cleanliness.

Beaches must submit a paid application for Pavillon Bleu (which translates as "Blue Flag") status. After they have applied, the beaches are then judged on criteria such as water quality, how well cleaning and rubbish are managed, how environmentally friendly the beach facilities are, and the accessibility and safety of the beach.

A message on the Pavillon Bleu website reminds visitors that in the wake of the Covid-19 pandemic access to beaches may still be restricted for health reasons, and “blue flag status does not guarantee that a beach will be open".

Occitanie has highest number of clean beaches and ports in France

The region of Occitanie in southwest France has 109 beaches and 19 ports judged to be "blue flag" standard, making it the most recognised region in this year’s list.

In the southeast, the Provence-Alpes-Côte d’Azur region was also highly recognised, with 96 beaches and 31 ports.

On the Atlantic coast, 35 beaches in Nouvelle-Aquitaine were judged to be clean, along with la Rochelle port (Charente-Maritime).

Non-coastal region Auvergne-Rhône-Alpes has also been recognised for its lakeside beaches, with 24 recognised "beaches" in the area.

A full list of "blue flag" beaches in France is available on the Pavillon Bleu website. News service France Info has also made an interactive map of 2020’s blue flag beaches.

As people in France return to the country's beaches and lakes, most of France’s bathing water has been found to be of “excellent” quality, according a 2020 report from the European Agency for the Environment.

The report, published on Monday (June 8), found that 79.5% of natural bathing water, including lakes and seas, in France, is of excellent quality.

There are four possible ratings for water in the report: excellent, good, satisfactory and bad. In France 2.2% of bathing water was found to be bad quality.

This puts France in 18th place for bathing water cleanliness in Europe. The country with the cleanest waters was Cyprus, with 99.1% of tested waters being of excellent quality.

The report also found that, overall, water quality in Europe has improved since 2013, with 84.6% of the 22,295 waters tested on the continent rating excellent in 2020.

Some beaches reopen with new rules in France

When will campsites open in France?