France will not compromise over access to Jersey fishing rights 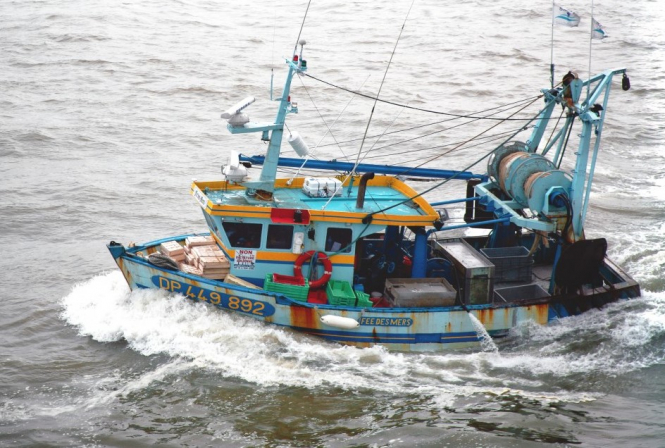 France will “not compromise” over alleged wrong treatment of its fishermen by Jersey, a French minister has said.

The statement by External Trade Minister Franck Riester came this morning after French fishermen who were protesting off the Jersey coast yesterday went home and the UK recalled naval vessels it had sent.

The immediate tension at the port of St Helier has ceased, however underlying problems remain despite assertions by UK Prime Minister Boris Johnson that he is “pleased the situation in Jersey has been resolved”.

French fishermen say many who had expected their fishing licences for British waters around the island of Jersey to be renewed have been refused them and others who have had licences issued have seen unexpected new conditions and restrictions imposed.

Mr Riester told Sud Radio the decisions taken by the Jersey government, which is supported by the UK, are “null and void”.

He said: “We will not compromise, the law is very clear, the conventions must be respected… We are being very firm about this, but also obviously in a spirit of de-escalation [of tensions]; there’s no point in taking useless risks.”

The French government has stated that only 41 French ships were authorised to fish out of 344 applications and that there were new requirements that have not been subject to any discussions.

“The licences have been given in very insufficient numbers and with conditions that have not been explained and without consultation with the European authorities,” Mr Riester said. “It is in contradiction with what is in the Brexit cooperation deal.”

It comes as a Downing Street spokesman said the British navy remained on standby to provide any further assistance Jersey requests and Mr Johnson has said “the UK will always stand resolutely by the people of Jersey”.

As a British crown dependency, Jersey has its own government but is defended and represented internationally by the UK.

A French MEP, Marie-Pierre Védrenne, told France Bleu today (May 7) the EU could take sanctions against the UK over the issue.

“We are very worried and we are determined to give full support to our fishermen. Brexit is never ending and what we’ve noticed is that we are faced with a partner who lacks goodwill and doesn’t respect the promises they made.”

She added: “With my colleague Pierre Karleskind, who is president of the European Parliament’s fishing commission, we are mobilised to make sure that the European Commission reacts to this. What is at stake is to make the British understand that if they don’t respect their promises, we have the possibility, and political will, to impose reprisals or counter-measures, notably in economic terms.”

She did not rule out the extreme solution raised by Sea Minister Annick Girardin, of cutting off Jersey’s electricity supply, but said it would be better to start with, for example, imposing new customs duties and limiting access to EU markets.

“We have to show we are willing to go very far,” she said.

French government sources quoted by the BBC said they hoped the situation would be “swiftly resolved by the full and total implementation of the deal”, which France considered allowed continued access to UK waters for fishermen who had worked in them previously.

Jersey ministers have insisted they have respected the rules, and where licences have not been allocated it was because applications lacked sufficient paperwork proving rights.