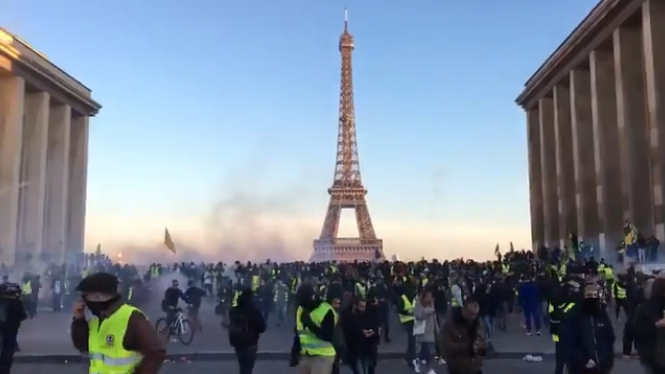 Protesters came out across France, with tear gas used in some cases by law enforcement
By Connexion journalist

This marks a change from previous weekends, which had seen the numbers of protesters continue to drop slowly week-on-week.

According to official figures from the ministry of the Interior, there were twice as many protests registered this weekend compared to last. The previous Saturday had seen 41,000 people - of which 5,000 in Paris - come out in protest.

The official figures are regularly contested by the gilets jaunes themselves, who claim to be far more numerous.

Most protests appeared relatively calm this weekend, although tear gas was used in some parts of the capital. There were also some significant clashes between protesters and police in Clermont-Ferrand (Auvergne-Rhône-Alpes), and Bordeaux (Nouvelle-Aquitaine).

Nine people were injured and 33 arrested in Clermont-Ferrand as the movement turned violent, and rubbish bins were set on fire. In Bordeaux, five people were arrested for throwing projectiles at police, and for keeping offensive weapons.

By afternoon in Paris, 28 people had been arrested.

There were also protests in Lille, Strasbourg, Rennes, Caen, Dijon, Montpellier, and Toulouse, and in Chambord, gilets jaunes organised a “giant picnic” of 1,500-2,000 people, to show their feelings in a more peaceful way.