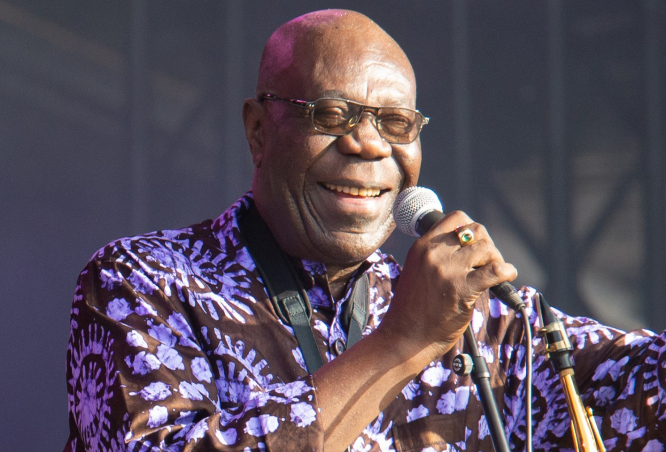 The Cameroonian jazz legend was born in 1933 in what was then French Cameroon and arrived in France as a teenager in 1949 for his studies.

He started playing the saxophone in 1956, which became his passion to the point that his father stopped financing his studies.

His playing improved and his contracts brought him to Belgium where, in contact with musicians from the Congolese community, he ‘Africanized’ his repertoire.

Until 1965 his career was essentially divided between Brazzavile (today capital city of the Congo Republic) and Cameroon. Then, on his return to France, he created his own big band and began to immerse himself in Caribbean music, especially rhythm and blues.

He accompanied several French singers on tour and in the studio, including Dick Rivers and Nino Ferrer. In 1969, his album Saxy-Party produced by Mercury was a success.

It was in 1972, that Manu Dibango's classic Soul Mokassa with his deep and powerful vocals was placed on the B side of a single, the A side of which was in support of the Cameroonian football team.

It went on to be an international success and also a source of disputes later on (see below).

He continued his career accompanying with his saxophone many mainly French artists; he collaborated in particular with Serge Gainsbourg.

In 1992 with the album Wakafrika, Manu Dibango revisited the heritage of song by teaming up with the tenors Youssou N'dour on Soul Makossa, King Sunny Adé on Hi-Life, Salif Keïta on Emma, Angélique Kidjo and Papa Wemba on Ami Oh!, and on Biko with Peter Gabriel, Ladysmith Black Mambazo, Geoffrey Oryema and Sinéad O'Connor not forgetting Dominic Miller (guitarist for Sting) and Katché (French drummer for Sting and Peter Gabriel).

Since then, between international collaborations, tours and records, Manu Dibango has never ceased to confront rhythms, to transcend their values with the powerful breath of his saxophone and to bring to play his eternal optimism underlined by his warm and serious laughter which goes beyond borders.

David Mancuso, a famous DJ who created The Loft in New York, a club famous for its private parties, discovered Manu Dibango’s Soul Mokassa and by regularly playing it in his nightclub he helped to make it a success in America.

In 1982, while he was recording the now legendary album Thriller, Michael Jackson slipped a part of Dibango's track onto the end of Wanna be Startin' Somethin, without his agreement and especially without crediting it on the album sleeve.

“I learned it unexpectedly," Manu Dibango told Le Parisien. “A friend of mine who worked at the UN in New York sent me a greeting card and added: ‘Congratulations on working with Michael Jackson’. I was flattered that one of the greatest artists of the century would take up one of my songs. But he was also making a lot of money claiming to be the author of the song.”

In 1986, the musician finally reached an agreement with Michael Jackson's representatives.

The year 2008 saw the release of a remix of Wanna be Startin Somethin' by Akon for the 25th anniversary of Thriller, as well as the song Don't Stop the Music by Rihanna.

The latter was a worldwide hit that sold more than eight million copies and also included the famous section Mama Ko Mamassa, Mamakossa.

"Once again, in both cases, I was not credited and Michael Jackson was even considered to be the songwriter of the song," Manu Dibango said. In the end an arrangement was found to his benefit.

With Soul Mokassa Manu Dibango created an eternal hit, and these illustrious ‘borrowers’ eventually had to admit to it.