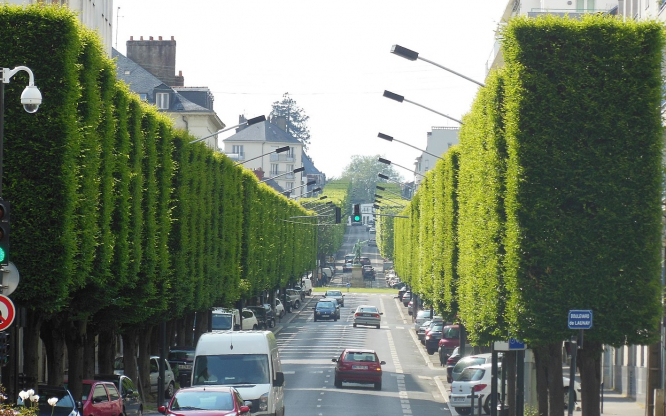 Boulevard de Launay in Nantes. The city is set to impose a 30 kph limit on 80% of its roads
By Connexion journalist

Grenoble (Auvergne-Rhône-Alpes) was the first city in the country to do this, in 2016; and it was followed by Lille last year.

Other cities including Rennes (Brittany) and Bordeaux (Nouvelle-Aquitaine) are also set to apply the rule in the coming months, while mayor of Paris Anne Hidalgo spoke of doing the same in the centre of the capital during her recent electoral campaign.

Johanna Rolland, mayor of Nantes, told newspaper Le Figaro: “We want a calmer town, with less noise and pollution, and we are championing softer forms of transport, such as cycling or walking. The safety of people in Nantes, especially families and older people, is especially a priority for us.”

In practice, Nantes will impose the 30 kph limit across 80% of the city - while especially busy areas will be at 20 kph. Pedestrian-only areas will be accessible to vehicles only if they are making a delivery or are offering a public transport service. The city has also installed ten temporary cycle lanes, which may become permanent.

The final 20% of the roads will still have 50 kph limits. Ms Rolland said: “These are indispensable roads for coaches and buses.”

The move has been welcomed by bike riding advocates and even shopkeepers, who hope that the new rules might have a positive impact on commerce.

Annie-Claude Thiolat, president of biking association Place au Vélo, said: “We approve of the 30 kph. The two main obstacles to people riding a bike are the risk of theft, and the danger linked to the speed of motorised vehicles.

“We are campaigning for signalling to legitimise cycling and make it a transport method rather than simply a leisure activity.”

Richard Gouraud, president of artisan and local shopkeeper union Unacod, said: “People will probably be grumpy [about the change], but I do not think it will significantly affect trade. We need visible signs and to ensure that cyclists stay civil. I also hope it does not create big traffic jams…”

The idea has not been without opposition, with some critics saying that the new system will be too complicated.

Julien Bainvel, of the opposing party Les Républicans (LR), said: “We are going to need to have a map under our eyes constantly to know how fast we’re allowed to go! In the same street, two signposts may follow one another, with a lack of readability, and therefore a lack of safety for the most vulnerable users, pedestrians and cyclists.”

The changes may not alter much in practice.

According to agency l’Agence de la Transition Écologique, the average speed of a car in the centre of Nantes is just 14 kph, and early figures from the city suggest that so-called “soft” transport methods - especially cycling - have increased by almost a quarter over the summer.

How to spot unmarked speed control cars on French roads

1 day ago
2
More French cities at risk of curfew