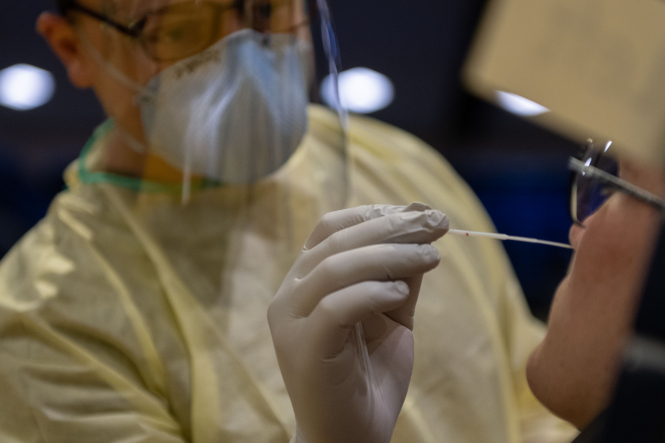 In a very rare case, a medical study found that a woman contracted meningitis following a nasal swab test injury
By Joanna York

PCR and antigen tests taken via long nasal swabs can cause ‘serious complications’ if they are not taken correctly, France's national medical academy has said.

The l'Académie nationale de médecine, comprised of 400 French and foreign doctors and medical experts, said in a statement yesterday (April 8) that nasal tests can result in serious injury caused by “breaches of the frontal skull bones”.

This is in addition to more common side effects, which are unpleasant but benign, such as pain or slight bleeding.

The health academy said it was important to raise awareness of the risks as nasal swab testing has become the primary method of testing for Covid-19.

The statement referenced a Spanish medical study from January 2021, which examined a case in which a nasal swab test caused a rupture in the barriers between the nasal cavity and sinuses.

This resulted in a fluid leak in the brain, which led to the patient developing meningitis.

The case is extremely rare. The authors of the study said this patient was the only example they had seen of someone developing meningitis after a nasal swab Covid test.

But the risk was something of which medical practitioners should be aware, they added.

The patient, a woman from Spain, recovered from the incident in hospital.

Correct procedure should be followed

The Académie nationale de médecine said that some tests are being done in “unsuitable conditions”.

It said that all tests should be done by health professionals “who have been rigorously trained in how to carry out the right procedure”.

Beyond this, it advised that medical practitioners giving tests:

It also said that children should have saliva rather than nasal swab tests, and that self-tests should be treated with caution.

Self-testing kits should be available in pharmacies in France from April 12.

But l’Académie nationale de médecine said that carrying out self-tests correctly could be difficult.

If the swab taking is “too gentle or not deep enough” the test may show a false negative, but, it said, the process “can also become dangerous if the swab goes too deep or in the wrong direction.”

Explained: How to use home Covid tests on sale in France