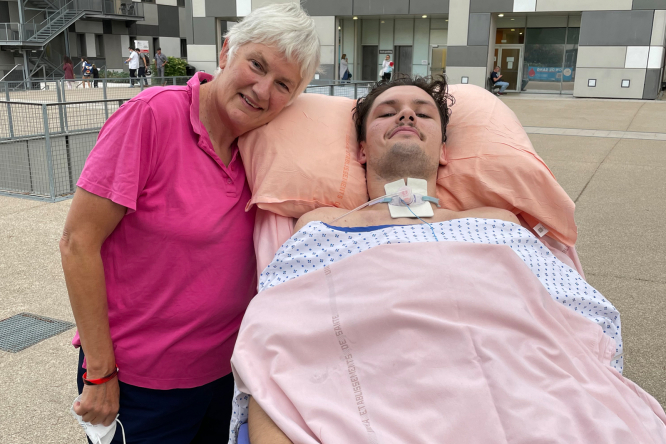 James Lasis was allowed out in the open air for a short while with mum Judy Pic: Courtesy of Judith Lasis

British rugby player James Lasis, who suffered a life-threatening injury playing for his French club, is returning to the UK for intensive rehabilitation after five months in hospital in Nice.

James, who received a neck injury in April during a match for Stade Niçois, has been offered a bed at the Spinal Injury Rehabilitation Centre in Royal Buckinghamshire Hospital.

While he is eager to move forward with the high-intensity programme for injured sportsmen and women in the UK, James says he’ll be “straight back over to France” as soon as it is possible to continue his treatment here.

The hospital offers a programme not available to him in France and James, 25, said: “We have found a very good hospital that specialises in my kind of injuries so I’ll be going there as soon as I can.

'As soon as I have had the rehab up to a good point, I’ll be straight back over to France'

“But I don’t really think about it in terms of leaving France, because as soon as I have had the rehab up to a good point, I’ll be straight back over to France.

“I’ll miss it while I’m away. I’ve been here a long time and it’s been good.”

Originally from Horsted Keynes in West Sussex, second-row forward James played two seasons at AS Mâcon before moving to Nice, and now considers France his home.

He was nearing the end of a successful first season with third division Stade Niçois, with the team at the top of the Nationale division and with sights set on moving up to the ProD2 league.

A scrum collapse left James with a near-fatal neck injury that needed emergency surgery at Hôpital Pasteur in Nice. In the following weeks, he was unable to talk or breathe on his own and could communicate only by winking.

He spent a long time in intensive care, helped by his parents Judy and Karl and brother Matt, who has since been working remotely from their flat in Nice.

Girlfriend Izzy, whom he met in France, has also been a key part of his support team, along with members of the Stade Niçois and AS Mâcon rugby ‘family’. James, who can now talk and breathe unaided for up to three hours at a time and feel sensations in his arms and feet, said he had been able to stay positive thanks to his friends and family.

He has even been allowed outside – still in his bed – to breathe fresh air and without his ventilator.

“The Stade Niçois family have been incredibly helpful right from the start.

He said “progress has been good” and he has learned “to celebrate little wins”.

His mum Judy is also very grateful for the support. “It’s virtually impossible to put into words. From watching the match on TV and seeing our son stretchered off the pitch not moving, it’s been a mixture of a nightmare, a rollercoaster of emotions, and amazement at the kindness of family, friends and strangers who we now count as friends.

“My eldest son Matt has been with us since the start and he’s been a tower of strength. We are so grateful his company has been so supportive in allowing him to continue to work remotely. Izzy has also been by his side since the beginning and has coped remarkably well.

“We have to make a special mention to Stade Niçois, who, from the very beginning, have been amazing.

“When I think of it, the people of Nice have been lovely, from the man in Pharmacie Cassini on our first day to cafes and bars, and even on the tram, asking us about James.”

Stade Niçois set up a fundraising page to help with his medical care and it has so far raised more than €24,000.