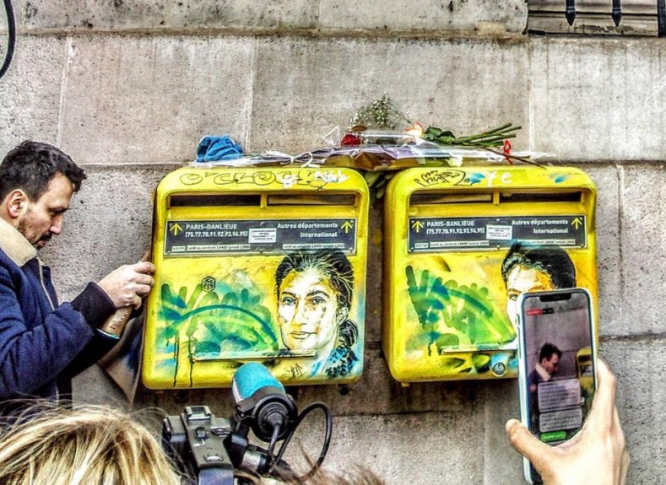 The artist, known as C215, had painted graffiti-style homage portraits of Ms Veil on two post boxes in the 13th arrondissement in Paris, at the time of her ceremonial internment in the Panthéon last year.

This week, the paintings were discovered to have been defaced with a black swastika - a symbol used by anti-semitic groups and associated with the Nazis.

The artist said: “Shame on the person who, despicably, disfigured my homage to Simone Veil with a swastika. What cowardice. Very shocking.”

He added that “faced with anti-semitism and provocations”, he would not stop defending “the memory of Simone Veil, her values, and her fight.”

Ms Veil was a prominent French politician, women’s rights and anti-Holocaust campaigner, and former president of the European Parliament. As a Jew herself, she survived internment at the Nazi concentration camps, Auschwitz-Birkenau and Bergen-Belsen, during World War II.

After her death in 2017 at the age of 89, Ms Veil was later honoured with burial in the Panthéon (along with her husband), in recognition of her iconic political achievements and what President Macron called her “untouchable dignity”.

The swastika incident also prompted ex-LREM, pro-Macron political party, Agir, to call this week for Ms Veil’s face to be added to the official representation of La Marianne, the female symbol of the French Republic.

In a letter to President Macron, Fabienne Keller, party spokesperson, said: “We propose to give Marianne the traits of Simone Veil, which represent France and the Republic, in their values, their fights, their challenges [and] their European roots.”

Ms Keller added: “It would have real meaning to give national life to the face of one of our nation’s biggest and most visible servants and defenders”.

The swastika incident comes in the wake of other similar anti-semitic graffiti appearing around Paris in recent days and weeks, and the government announcing a 74% rise in the number of anti-semitic reported acts in France in 2018.