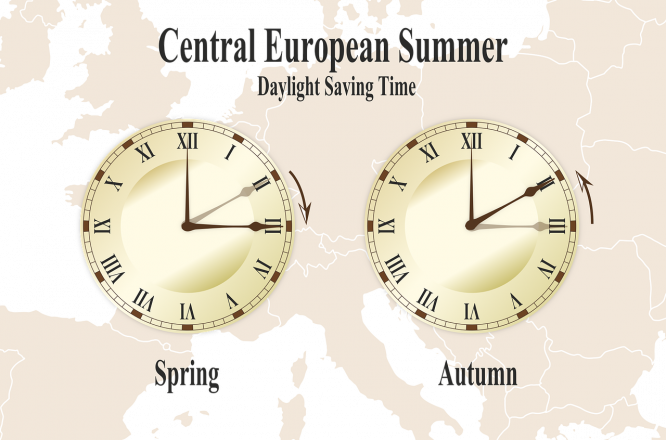 Clocks go forward this weekend to summer time with the change timed to happen at 2.00 on Sunday morning when clocks should be changed to 3.00.

Although it means an hour’s less sleep on Sunday morning it should mean an hour’s extra daylight at the other end of the day – which will be a bonus as the weather forecast looks promising for sunshine across the country.

Most internet connected devices like smartphones, tablets and computers will update automatically, as will TV boxes. Those with sundials should leave them…

Half the people in France struggle to remember which way to change their clocks – although the rhyme ‘Avril avance, Octobre recul’ is supposed to help some in the same way that ‘spring forward, fall back’ helps Americans.

Changing the clocks in France dates back to the oil price crisis in 1973-74 although clocks were changed in the UK during the First World War to save on coal usage (although at the time, people had to put the clockwork clocks forwards by 11 hours to avoid breaking them).

Spare a thought, then, for Yohanna Arvaud, who is horlogère in charge of the clocks in the Elysée Palace, where there are 60 historic clocks to update.

The history of the change goes back farther, and Benjamin Franklin wrote an essay in 1784 while US ambassador in Paris on cutting candle use by getting up an hour earlier and making use of natural light.

The energy saving continues today with energy watchdog Ademe saying that moving the clocks forward allows the saving of 440GW/h – the equivalent of the energy usage of 800,000 households or 1% of French energy consumption.

Since 1998 the hour change has been done at the same time across the European Union but French people do not like it. The autumn change is the one that bothers them the most, as 75% said in a poll they wanted to stay on summertime all year round.

This year’s autumn change, when clocks go back an hour, comes on October 29.

Read about the Breton island that has two time zones from a previous Connexion newspaper article here.