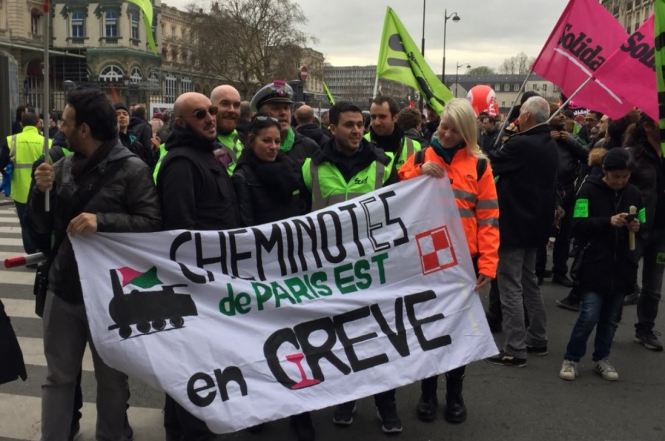 The strike against the proposed reforms to the SNCF is continuing today (Sunday April 8) - the third day of stoppages since it began. Trains began to stop last night, with the strike continuing into Monday.

One in five trains on the TGV and Intercités is running, while one in three is running on the Transiliens and the TER.

Strikes are expected to continue for 33 more days in total - throughout April, May and June - and this week the CGT union suggested that it could even continue into July or August.

And while calculations suggest that the strikes are costing SNCF upwards of €20 million per day, the workers themselves have said they will suffer dearly for their action too.

Known as “cheminots” because of their special SNCF contracts, the workers are striking in protest at the government’s proposed reforms.

The most controversial of these are the plans to force through changes using "ordannance” government decrees, and to get rid of the historic "statut de cheminot" contracts, replacing them with the standard Code du Travail agreements for all new recruits.

Cheminot contracts effectively ensure a “job for life”, and only allow workers to be dismissed in exceptional circumstances.

Despite the difficulties caused by the strike - not only to travellers but also to workers’ pay packets - they remain committed to the cause.

Cheminot Patrick, transport policeman since 1994, said: “This month it’s going to be harder than other months. There are certain ways we can do it; work a complete day, half a day, or just an hour. But it is in our interest to make sure there is a strong enough movement to get a favourable outcome.”

Philippe, who has worked as a TER and TGV conductor since 1997, said: “There are many sacrifices we can make to continue to strike. We eat a bit more pasta and more potatoes [and less of more expensive foods] and we watch the budget everyday. We pay attention to our daily budget anyway, so this is an extra effort. But it’s worth it.”

Renaud, who has worked for SNCF as a signaler in Toulouse since 2011, has said he has accepted his family will not have a holiday this year because of the strike.

He said: “I will stay at home, and I will not go away. I don’t know how much money I will lose this month exactly, but I can assure you that my salary will be absolutely ridiculous at the end of the month.”

The comments come just days after a national poll found that 57% of French people believe that the strike is “unjustified” and do not support the action.

Strikes are still scheduled for the following days, as government talks with SNCF have continued to prove inconclusive: