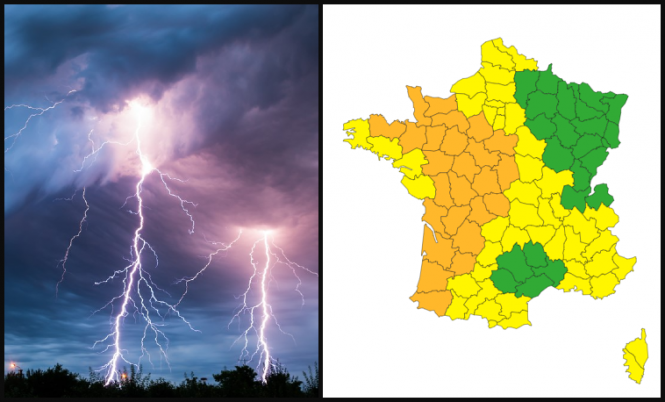 *update, June 16, 10:20. Three more departments were added to the orange storm alert after this article was published. They are: Seine-Maritime, Eure and Corrèze.

An orange storm alert has been issued to 25 departments today (June 16) in the western half of France by French national weather service Météo-France.

Storms are expected to begin in Brittany early this afternoon and then also develop from the southwest of France this evening before moving towards Paris late tonight.

“In the early afternoon, thunderstorms will move up through southern Brittany and then strengthen over Côtes d'Armor, Ille et Vilaine, Manche and Calvados,” Météo-France stated.

“In these four departments, strong thunderstorms could occur this afternoon and this evening with hail and intense lightning.

Météo-France said the storms could settle and lead to up to 40 to 50mm of rainfall.

“This evening and during the night, other violent thunderstorms will move up from the Basque Country and spread to the whole of Aquitaine, Poitou-Charentes, part of Limousin, the Centre region, Anjou and the south of Normandy," Météo-France added.

“These thunderstorms may also lead to hail and intense lightning.

“They will also bring sudden gusts of wind, reaching up to 100km/h.

“The activity of these thunderstorms will progressively weaken during the night and they will arrive slightly weakened over the Paris region.”

Météo-France issued the following recommendations for people in the affected departments: