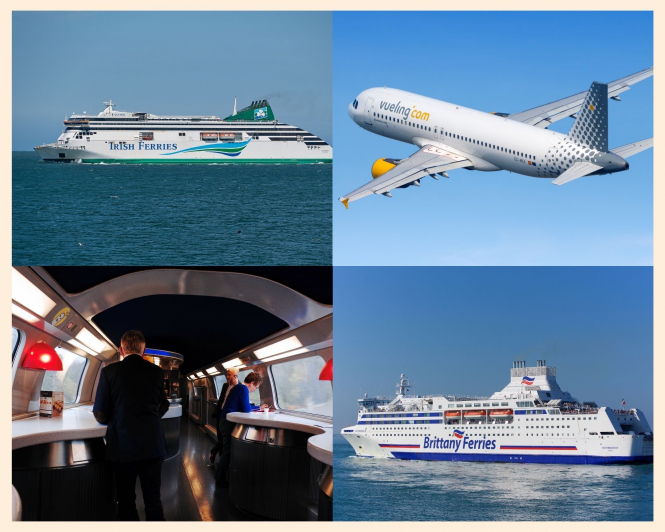 We look at the travel news affecting journeys to, from and around France this week Pic: Markus Mainka / Julie Mayfeng / Craig Russell / David Peter Robinson / Shutterstock

The biggest travel news this week has been the introduction of new rules for travellers from non-EU countries, who will from tomorrow have to show a negative result from a Covid test in the 48 hours before departing for France.

However, here we look at the other stories affecting journeys to, from and around France.

1. US tightens testing rules for travellers from France and elsewhere

US President Joe Biden announced yesterday (December 2) that all inbound international travellers will have to show the negative result from a Covid test taken within one day of their departure for the US from December 6.

Read more: US to tighten Covid rules for travellers from France and elsewhere

This will apply to everyone, “regardless of nationality and vaccination status.”

Until now, fully vaccinated travellers were only required to take a test in the three days before their journey began.

President Biden also announced that masks would continue to be mandatory in airports, on planes and in other public transports until March 18.

2. Geneva airport passengers will not risk quarantine because of works at French exit

The Swiss government has confirmed that travellers transiting through the country – perhaps on their way to French ski holidays – will not have to quarantine for 10 days as other travellers do.

As long as you leave the country within 24 hours, with no stopover, you can avoid the isolation rules.

This solves a problem faced by people flying to Geneva airport, who had been forced to leave via the Swiss exit because of works being carried out on the French side.

Switzerland’s quarantine announcement was made on Saturday (November 27), but the clarification on the rules was only published by the UK government late this week.

“If you are transiting [through] Switzerland, you are strongly advised to have your onward travel booking in advance and to have confirmed you meet the entry requirements of your destination country,” the FCDO advice states.

“If you are transiting by air, you must complete an online form and provide contact details,” it adds.

3. French trains are far from the most delayed in Europe

Trains in France are on time or less than five minutes late 91% of the time, according to a new report from the Autorité de la qualité de service dans les transports.

The report considered the performance of TGV, Intercités, TER and Transilien trains.

Of the 16 European countries included in the study, which was carried out between 2018 and 2020, French trains came 11th in terms of punctuality.

The best-performing countries were Switzerland, the Netherlands and Denmark, where more than 95% of trains were on time or just a couple of minutes late in 2019.

Sitting below France were the UK, Italy and Portugal, where only 82% of trains were on time.

“Despite slight improvements in punctuality since 2014, France’s position in the rating has not changed, since the majority of European countries which are rated higher have maintained or boosted their lead,” the report said.

France moved higher up the table when it came to regional and Transilien trains in Ile-de-France. Paris trains came eighth in terms of punctuality, ahead of Oslo, Lisbon, London and Belgium’s major cities.

In 2020, France managed to push its general punctuality score up to 92%.

Irish Ferries began sailing the route in June, and added a new ship called Calais Seaways (renamed Isle of Innisfree) in November, with services expected to begin this month.

The planned purchase of the Ciudad de Mahon will bring Irish Ferries’ Dover-Calais sailings to 30 a day.

In this way, the company aims to improve the reliability of the land bridge across Britain for the movement of goods between the Republic of Ireland and continental Europe.

EasyJet is set to add a new Bordeaux-Grenoble route to its offering for people wishing to go on skiing holidays.

From February 13 until March 20, the low-cost airline will fly between the two cities once a week, and will be the only operator to provide this service.

EasyJet says that “several shuttles” will be available at Grenoble to “allow people to reach ski resorts.”

Vueling has added six new routes to its offering for the Christmas period, beginning on December 16 and ending on January 10.

The bar cars which offer TGV passengers a place to eat and drink during their journey are closing as a result of the pandemic situation.

Passengers will still be able to buy food and drink in the bar area, but will have to return to their seat to consume their purchase.

SNCF CEO Jean-Pierre Farandou said the aim was to avoid gatherings in these carriages, which had only reopened on June 9 with the summer relaxation of Covid restrictions.

He said staff also pass regularly through the train to make sure that everyone is wearing their mask as required, and carriages are frequently aired and disinfected.

This comes as the Institut Pasteur reveals that: “Certain means of transport have been associated with an increased risk of infection.” In trains, the chance of catching the virus increases by 30%, while in planes it rises by 70%.

Brittany Ferries has informed some of its customers that an unforeseen technical issue left their My Account page unprotected, potentially revealing personal information to anyone who had access to the associated email address.

Affected customers were contacted on Tuesday, and told that: “in spite of our cyber vigilance and rigorous security checks,” their “account’s protection settings were unintentionally changed between October 21 and November 2 of this year.”

“We uncovered a fault in the authentication process used for My Account login details that meant any My Account could be accessed without the right password.”

The issue has now been resolved, and Brittany Ferries have said that the “risk of malicious intervention is exceptionally low and certainly there is no evidence that data has been compromised.”

9. Hauts-de-France suspends payments to SNCF over problems with rail system

The Hauts-de-France region has announced that it will be suspending its payments to SNCF because of issues with train services.

In the first half of 2021, Hauts-de-France’s TER trains were delayed or cancelled more often than in any other region, and passengers complained of overcrowding and a generally poor service.

The region had already announced at the end of October that it reserved its right to stop payments if problems with the rail system continued.

Now, despite an ‘emergency plan’ by SNCF, “all of the failures persist,” according to the region’s leaders. “In spite of the actions announced by SNCF, the situation has not been rectified.

However, the Écologistes des Hauts-de-France’s group has criticised the action, describing it as “illegal,” and suggesting that the rail network policy of regional president Xavier Bertrand has “pulled the SNCF network apart.”

Brittany Ferries CEO Christophe Mathieu described the new ship as “one of the pillars that will drive our recovery from the Covid crisis and deliver another successful 50 years for Brittany Ferries.

“From customers and suppliers to the French crew that will sail with her, we all look forward to welcoming Salamanca to the Brittany Ferries family ahead of her sister ship Santoña a year later.”

By 2025, five new ships will have joined the Brittany Ferries fleet. The first, Galicia, was first put into service in 2020.

The Salamanca will be used for trips between the UK and Spain, although other additions to the Brittany Ferries fleet will cover UK-France routes.