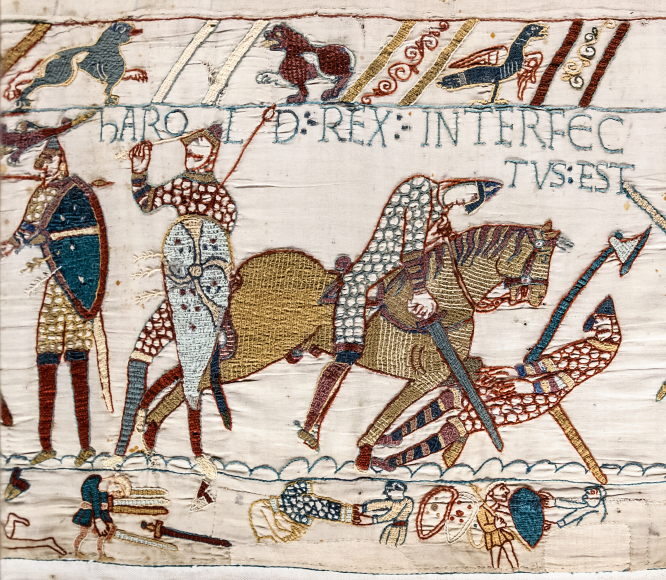 One in the eye for Harold, as depicted in the Bayeux tapestry
By Samantha Davis

Essentially, the Battle of Hastings was all Edward the Confessor’s fault: in the years before his death he had not been clear about the succession and in 1066 the two leading pretenders to the English throne ended up thrashing it out in the countryside of East Sussex.

As we all know, Harold lost and William won, which left the victorious new king from the other side of the Channel with a PR problem. How to convince his new subjects (particularly any resentful English lords) that he was their legitimate ruler?

William the Conquerer’s half-brother Bishop Odo came up with a solution in the 1070s. The Normans would state their side of the story in a massive tapestry, around 70metres long and 50cms high; fifty or so embroidered cartoons reinforcing William’s authority, glory and legitimacy. And it would be made in England.

The facts, from the Norman perspective, would be laid out in glorious colour for all to see. (Being embroidered rather than woven means that technically it is an embroidery rather than a tapestry, but perhaps at that time the term “embroidery” didn’t quite convey the scale of the work. In any case, it is almost always called a tapestry rather than an embroidery.)

At that time in Europe, territory was still being fought over; every time a new ruler acquired a crown they would eye up the possibility of extending their power by invading someone else’s land. Life was short, brutal and uncertain. Monarchs could not be certain of having sons, or even of having any surviving children, so crowns were passed to named inheritors. These were often adult male relatives, but not always. Sometimes they were allies.

So when Edward the Confessor acceded to the throne of England in 1043, he was already calculating who to name as his successor. In 1045 he married Edith, daughter of Godwin, the Earl of Wessex (the most powerful man in England at that time) but they never had children.

Some historians speculate that his religious scruples precluded consummation of the union. They theorise that having spent decades of exile in Normandy, he had already promised the crown to William Duke of Normandy, so his marriage was purely to get the powerful Earl on side. There was never any intention to breed an hier.

On the other hand, why would Edward not want his own son to inherit? Also, it seems unlikely that Godwin, the most powerful man in England, would happily allow his daughter to form an unconsummated marriage of convenience. Surely he would have the eye on the throne for his grandson? But whichever way it went, Edward and Edith had no children, and the obvious heir became Edith’s brother, Harold Godwinson.

Edward might easily have promised him the throne; he had made Harold Earl of East Anglia the same year he married Edith. There was also the lurking threat from Scandinavia and many of the English ruling classes were keen to avoid the crown falling into the hands of the Norwegians, who also had claims to the throne.

Harold needed all the allies and supporters he could get. He especially needed the loyalty of strong young warriors who could ride out and repel invaders. So it is quite possible that he gifted the inheritance to his brother-in-law. And then he fell out with Godwin, his father-in-law.

In 1051, Edward ordered his father-in-law to raise troops and sack Dover in retaliation for a deadly brawl, but Godwin instead raised troops against the king, who called on support from the Earls of Mercia and Northumbria.

For a time it looked like civil war, but Godwin’s supporters didn’t have an appetite for a civil war. They backed down and Godwin and his family were exiled, but within a year Godwin was back with a large armed force demand-ing that several Norman nobles be banished, and Edward had no choice but to capitulate.

Harold is crowned King
When Godwin died the following year his son Harold Godwinson took over the reins and as Edward increasingly occupied himself with the construction of Westminster Abbey, Harold took over much of the running of the country.
In 1062, Harold marched west and drove off an invading force from Wales. In 1064, he was shipwrecked off the coast of Normandy and was either held or was the guest of William, Duke of Normandy. Did he willingly offer to give up the crown to William? Or was he coerced? Either way, he appears to have sworn to hand it over on Edward’s death.

It is hard to see how such a buccaneering warrior would have willingly handed power to a foreigner, however. The throne was within his grasp, why would he not want it?

What is known is that once Edward died, the Norwegian King Magnus and his son Harald Hardrada claimed the throne, as did William, Duke of Normandy. So in January 1066, just to make things clear, Harold II was crowned at St Paul’s cathedral. In response, both Harald Hardrada and William raised troops and planned invasions.

The first to arrive was Hardrada from Norway, allied with the Orkney Vikings and Harold’s own brother Tostig. They landed in the north of the country, and Harold’s allies, the Earls of Mercia and Northumberland, failed to defeat them, so Harold II was forced to march north to York to do the job himself.

He fought the invaders at the Battle of Stamford Bridge, and won; both Hardrada and Tostig were killed, leaving only William with a rival claim to the throne.

Hearing the news, William invaded England using a fleet of ships to carry 5,000 troops, horses, arms and supplies over the Channel from France, all of it paid for by his brother Odo, the Bishop of Bayeux. While Harold and his exhausted Saxon army were marching south from York as fast as they could, William landed at Pevensey, marched to Hastings and began constructing a wooden fort.

Once Harold arrived in Hastings, rather than wait for reinforcements, he decided to take the enemy by surprise. He used a tactic of making a wall of shields, which the Normans could not break through. However, rumours started to run through the troops that William had been killed, and the Saxons broke ranks believing the battle had been won. Harold was killed, probably not by an arrow through the eye, but by a Norman armed with a sword.

The events shown on the tapestry show a slightly different slant. It starts with a picture showing Edward the Confessor sending Harold to see William, Duke of Normandy – but then in another scene, Harold is taken prisoner by Guy, Count of Ponthieu. Messages are exchanged and Harold is released to William who invites him to go on a campaign against Conan II, the Duke of Brittany. On the way, the tapestry shows the Norman army stuck in quicksand near Mont-St-Michel and Harold saving two Norman soldiers.

Harold and William together defeat Conan and William honours Harold with arms and armour, and Harold takes an oath on religious relics. The title of the image is explicit about an oath being taken but there is no mention of the oath’s contents. The next image, back in England, shows Edward remonstrating with Harold, who is depicted in a submissive position, as if in disgrace. The next image is of events around a year later, when Edward was dying and bequeathed the crown to Harold. There is then a scene showing Harold’s coronation.

At that point a shooting star appears, possibly Halley’s Comet. Is it an omen? Ghostly ships are also depicted and there is then a picture of the invaders reaching England, landing and preparing a feast.

There are then images of a house being burned by soldiers and a woman holding a boy’s hand asking for clemency. Messages are exchanged between the two armies as the Normans build a motte and bailey construction at Hastings to defend their position. William then makes a speech to his army.

The pictures show both armies fighting bravely, and William raising his visor to show his troops that he is not dead. Harold’s brothers, Leofwine and Gyrth are shown as falling in battle, while Bishop Odo is shown brandishing a mace. Harold is shown dying of an arrow in his head and from a sword blow. The scene shows dismembered soldiers and blood everywhere, and the final scene shows unarmed English troops running away from
the battlefield.

The tapestry is not complete; it appears that the last part of it is missing, although it is assumed that the lost section contained only one more scene, possibly William’s coronation. What it might have been is open to speculation. But what is known is that the tapestry was displayed in Bishop Odo’s residence and then later donated to the cathedral of Bayeux.

The tapestry is currently on show at the Musée de la Tapisserie de Bayeux in Normandy. However, in January this year, President Macron announced that it will be loaned to London’s British Museum in 2022 for public display. It will be the first time that the tapestry has left France in 950 years.