Around France in seven engineering marvels 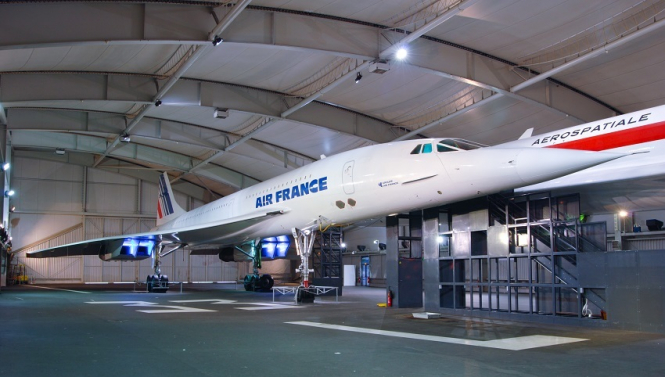 It may not be in the air, but two of them can still be visited (free) at the Musée de l’Air et de l’Espace, on the northern outskirts of Paris, and for €9 you can even explore the interiors.

The Anglo-French turbo-powered jets operated from 1976-2003, with a maximum speed of 2,180km/h (twice the speed of sound) and seated 92-128 passengers. Concorde was jointly developed and manufactured by Sud Aviation (later Aérospatiale) and the British Aircraft Corporation (BAC) under an Anglo-French treaty.

A total 20 aircraft were built, including six prototypes and development aircraft. In 1997, a return ticket from London to New York cost around US$8,000 about 30 times the price of usual airline ticket.

The museum also runs simulator sessions teaching people how to pilot a commercial airliner, or even how to land the lunar module – but book this online well in advance as the sessions fill up quickly.

The museum has a vast array of historic flying machines too, including a pedal car with two sets of wings, and a selection of French prototypes. There is even a rocket in the car park and a hall describing the conquest of space. If you want to read everything, allow the best part of a day.

At the time of going to print, some of the halls were closed for restoration, so check which are open before you go.

A photogenic marvel and a technical triumph. The highest bridge in the world, it is a viaduct bypassing the Aveyron town of Millau. There was opposition to the planned construction from businesses nervous of losing customers from passing trade, but in fact the viaduct has attracted more tourists to the area, and the town has flourished.

An Anglo-French project, like Concorde, and designed by Norman Foster and Michel Virlogeux, the Millau Viaduct is a cable-stayed bridge spanning the Tarn Valley. It carries the A75-A71 motorway between Paris and Béziers/Montpellier and cost around €394million.

Construction began in December 2001 and was completed three years later. The road deck was built on land and rolled out from one pylon to the next, a series of temporary towers supporting the weight.

You can drive out from Millau to the ‘Aire du Viaduc’. A service station includes a small exhibition explaining how the viaduct was built, with models and plans of all the other prototypes.

In the Savoie, it is an amazing if less well known engineering feat: the balcony road travels 1,533m above sea level. The two nearest cities are Grenoble and Chambéry. Built in six years (1928-1934), the D77B mountain pass starts with a famous 3km section called the ‘lacets de Montvernier’ (‘Hairpins of Montvernier’) which includes no fewer than 17 hairpin bends climbing 400 metres.

If you have a head for heights, and faith in your car’s brakes, it’s one of the most scenic roads in the world. After the hairpins, the road joins the D77 and is less steep, winding through Alpine fields and the villages of Le Noirey, Montbrunal and Montpascal until it reaches the summit, where there is a restaurant.

It is possible to make the descent by another, longer route.

When it comes to waterworks, the Canal du Midi, which effectively flows uphill for part of its course, is the best known engineering marvel but there are plenty of others in France.

The Canal de Bourgogne (right, top) was designed in the 16th century but took 200 years to build and only entered service in 1832, connecting the Seine and the Rhône rivers.

The nearly 3km-long Pouilly tunnel from Pouilly-en-Auxois to Escommes (including 32 ventilation wells) was almost entirely excavated by hand.

Barges originally traversed the tunnel by manually pulling the tug through on a thick chain attached to the tunnel wall. (It took around 10 hours.)

An amazing piece of engineering, it carries the Garonne Lateral Canal over the river of the same name via a series of 23 arches, each with a span of 20 metres.

When it was opened in 1849, the 539m construction was the longest navigable aqueduct in France. As it is not wide enough for two barges to pass, there is a lock and a canal basin downstream and a canal basin upstream.

A fascinating footnote while considering the Canal du Midi and the Garonne Lateral Canal is that they each have one of the only two water slopes ever built.

The Montech Water Slope (‘Pente d’eau de Montech’) entered service in 1973, and the Fonserannes Water Slope was inaugurated a few years later near Béziers on the Canal du Midi.

They were both built beside existing lock flights, which is why despite them falling into disrepair the canals have not been put out of service.

In the department of the same name, it is a popular swimming spot in the summer, much loved by children who care not about its Roman history or technical construction.

If you are interested, however, visiting outside the summer months is recommended as the underground museum explains everything in detail using multimedia displays. If you really want to read everything, allow half a day.

The Pont du Gard, which crosses the Gardon River, was built in 1AD as part of a 50km system to bring water from a spring in Uzès to the Roman settlement of Nemausus (Nîmes). The three-tier construction is 48.8m high, making it the highest of all surviving Roman aqueducts, and it is one of the best preserved. Architects estimate it carried 40,000m3 of water per day to supply the baths, fountains and homes of the Roman city.

It is not clear when it fell out of use; perhaps as early as 4AD or as late as 6AD but eventually a lack of maintenance meant that mineral deposits choked off the water supply. It then became used as a toll bridge. It was extensively renovated in 2000, when the underground museum and visitor centre were added.

It costs €8.50 per person for parking and entrance.

On the Creuse River in central France, it was built between 1917 and 1926 and when inaugurated was the largest in Europe.

At 61 metres high and 300m across, it varies in thickness from 54m at the base to 5m at the top. The water behind it forms the 312 hectares of the Chambon Lake, holding 57 million cubic metres of water, which is obviously popular with water sports fans.

It produces 101 million kWh per year, even supplying Paris.

This is only one of a series of dams along the Creuse river, and although the benefits in terms of producing energy and a water playground are not negligible, damming the river brought an end to its salmon population.  The same story is true across the country.

Dams have amazing benefits, but historic villages have been flooded, and the ecology badly affected in many cases.

The WWF has applauded the French decision to remove two large dams from the Sélune river in Normandy; the 35m-high Vezins dam was emptied prior to being demolished in May 2018, and the 15m-high ‘La Roche qui boit’ is due for demolition before the end of 2019.

The WWF says it hopes that the 90kms of river will eventually be restocked with eels and salmon which need to migrate up and downstream.

If you book ahead you can visit the dam and the hydroelectric plant on Tuesdays and Wednesdays for free.