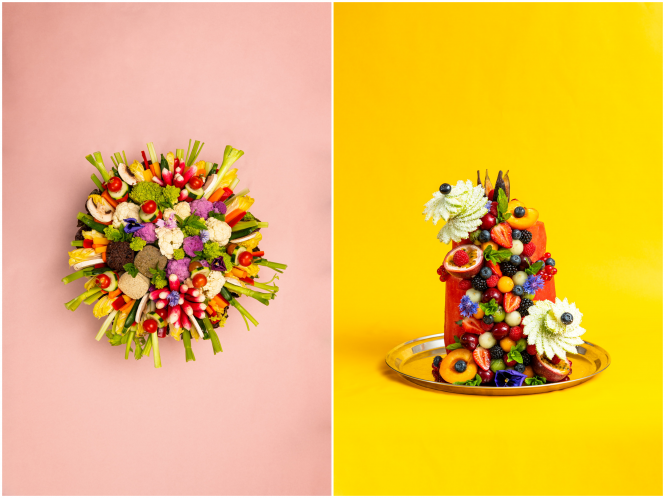 France’s famed Cannes Film Festival is known for glamorous celebrity appearances and extravagant ceremonies, but this year there was another colourful element just on the sidelines.

Eugénie Maurin, a 25-year-old entrepreneur from Lascours, a small village near Marseille, was at the festival promoting and selling her works of art that are made out of fresh fruit and vegetables.

Her creations use only local, seasonal products (except for exotic fruit) that she fashions into unique designs.

The entrepreneur now plans to expand her business, called Les Paniers d'Eugénie, as demand has soared despite the Covid-19 pandemic.

She is planning on developing her “laboratory” - as she calls it - which is currently based in the kitchen of her great-grandmother’s house - and eventually open her own shop.

The Connexion speaks to Ms Maurin about her creations and her recent trip to Cannes.

How did you come up with the idea to make art out of fruit?

I have always enjoyed preparing vegetable baskets with my friends at traditional Provençal village festivals.

I was already a micro-entrepreneur selling dream-catchers when I finished my Brevet de technicien supérieur - a national diploma of higher education in France.

Several people I know advised me to move to Paris in 2019 to work in the "Ferme de Longchamp" shop and there I was trained by Atef Barbouche.

How would you define your work? And why do you use the term 'laboratory' instead of 'kitchen'?

There isn't really a recognised or official appellation. I consider myself to be a creator/artisan of fruit & vegetable compositions.

My laboratory is in fact my great-grandmother's kitchen, which I completely renovated, obviously respecting the standards. I call it a laboratory because I transform raw products, I embellish the products, but I don't do any cooking.

How do you manage to deliver your creations?

I have two delivery men who rotate around the area. Everything is delivered in refrigerated trucks so as not to break the cold chain. I usually deliver large orders so it's cost effective, like for wedding services, for example.

How did you get on in Cannes? Did any celebrities come to taste or order your products?

I was at the Radisson Blu Hotel. I was far too busy with work to worry about the celebrities but I know I had some good feedback - truthfully!

Your business has been very successful. What do you put that down to?

I work with local, quality, seasonal products (except for exotic products). I go to the market once a week at 3:30 - 04:00 to source fresh produce and I think people realise this when they taste my creations.

Do you have plans for further development?

There are several of us offering this concept in France but I am the only one who doesn't have a shop, and I would like to open one.

I wouldn't sell raw fruit and vegetables, only creations, juices and soups. But before opening a shop, I would like to expand the lab in terms of employees (I have four at the moment) because our demand is high.

Five facts about strawberries in France

Inspired by Ms Maurin’s fruity concoctions, we looked up five interesting facts about strawberries in France, which are one of her key ingredients this summer.