How winemakers in France are reducing pesticide use 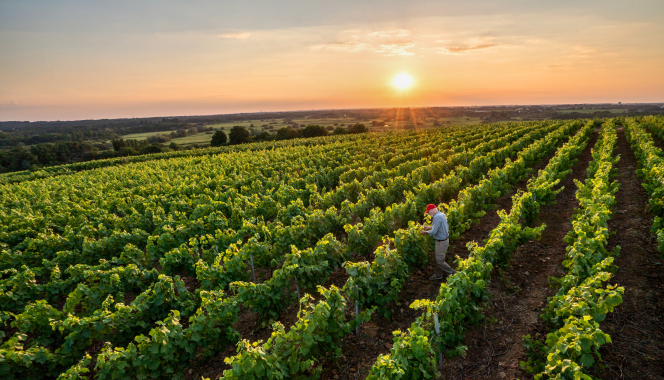 The use of chemical pesticides in farming is a very contentious topic, eliciting powerful emotions from environmentalists, consumer groups, politicians and the agricultural community.

Last month, I wrote about the French EcoPhyto programme and focused on the measures which can be taken to reduce the risks of using pesticides. This month, I will concentrate on how vignerons are reducing their use, either by reducing the amounts used or finding alternatives.

When it comes to reducing dependence on pesticides, vignerons have several options, starting with the choice and maintenance of the spraying equipment.

Regulating use to avoid waste

A good sprayer will be far more efficient in its use of product than a poor one and that can make a big difference in the amount of pesticide used and how much is sprayed onto the ground or into the air, rather than onto the vine.

A new generation of sprayers has been developed that recapture the sprays which miss the vines, although these are only really suited to flat, trellised vineyards.

In the last 10 years a system of controlling and certifying vineyard sprayers has been put in place to make sure they are well-maintained and calibrated to avoid leaks, accidents and ensure the desired dose is actually sprayed.

Understanding the level of threat posed by diseases and insects to each vineyard at each stage of the season can reduce the amount of pesticide used by up to 80%. For example, it isn’t necessary to apply the full dose of a pesticide when the vines only have small shoots.

Also, it isn’t necessary to start spraying to protect against downy mildew before it has rained or when temperatures are still low.

I know older vignerons who used to spray the same concoction of pesticides every two weeks throughout the growing season.

The Ecophyto programme has done a lot to get rid of that mentality. Some grape varieties are more resistant to powdery mildew than others. Some have tight bunches which harbour diseases.

Overuse of fertilisers will make a vineyard too vigorous, with lots of leaves providing humid, shady conditions which favour fungal diseases.

Choosing where and how densely to plant the vines and what trellising and pruning methods are used, can make vineyards less disease-susceptible and more easy to protect with less pesticides.

Read more: A guide to the winemaker’s calendar in France

New disease-tolerant grape varieties have been developed and approved for most French regions, although none are permitted for Appellation wines as far as I know.

Whether consumers will choose those wines over traditional ones is another matter. Maybe if they appreciated the reduction in pesticides, they would. Bio-control products can be used as alternatives to insecticides.

Trichogrammes are tiny parasitic wasps which attack the eggs and larvae of the grape berry moth. However, spreading them is expensive and you can’t spray them with sulphur.

The bacteria Bacillus thuringiensis has insecticide properties but is incompatible with copper-based fungicides and requires twice as many treatments to cover the lifespan of the grub it kills.

Sexual confusion pheromones can be dispersed to prevent the harmful insects mating but are expensive and less effective than insecticides.

Yes to natural treatment but not just any old way

Some vignerons swear by their “natural” treatments such as teas made from nettle and prêle (horsetail) but scientific trials don’t show any significant protection against fungal diseases.

They may improve the effectiveness of pesticides (organic and synthetic) though, hence reducing the required dose. When it comes to reducing herbicide use, mechanical alternatives offer the best solution.

A new generation of sensor-controlled ploughs have been developed which can work underneath the vine row.

Other choices like gas powered weed-burners are ineffective and polluting in their own way. Acid-based herbicides are deemed too ineffective in a vineyard.

Blanket use of herbicides should be replaced by a combination of ploughing and seeding rows with cover-crops that don’t compete with the vine for water or nutrients, and also act as source of organic matter.

By taking a holistic approach of improved cultural methods, using the best spraying equipment, choosing the least toxic products and taking proper care when handling them, using alternatives where possible and moving towards disease-tolerant grape varieties, pesticide-use in viticulture can be reduced to a sustainable level.

The approach will not satisfy everyone, notably the political activists who would like a complete ban on all chemical crop-protection, but it will massively reduce the health risks to vineyard workers and the impact on the environment.

Jonathan Hesford has a Postgraduate Diploma in Viticulture and Oenology and is the owner, vigneron and winemaker of Domaine Treloar in the Roussillon.