Did you know: World’s first ‘automobile’ was French 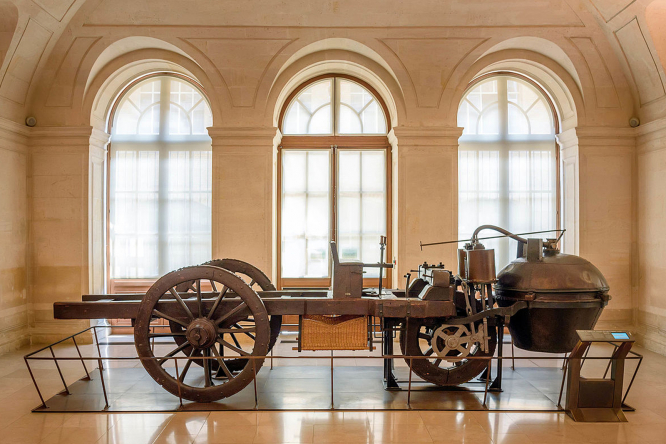 The vehicle was driven by steam and created by an army engineer, Nicolas-Joseph Cugnot, who was born in 1725 and died in 1804.

There had already been research into the use of steam for driving machinery, but up until then it had only been used for stationary devices.

Cugnot’s vehicle was designed to transport canons or other military equipment and it was called a fardier à vapeur as a fardier was the name given to massive two-wheeled horse-drawn carts used for transporting very heavy equipment.

The fardier à vapeur was made up of three parts: a wooden chassis with three wheels; a two-cylinder motor over the front wheel; and a huge boiler at the front of the contraption. He first made a small-scale model in 1769 with promising results. The second full-scale vehicle, was completed in 1770.

It was designed to move forward on its own, with no animal traction – unheard of at the time – at a speed of 4km/h. It could also go backwards and could carry five tonnes.

In November 1770, it was tested out at Vanves in Paris and though it did move forward a few metres, its progress came abruptly to an end, because it ran into a wall. This was perhaps another of its claims to fame: the first car accident.

The fardier à vapeur was extremely cumbersome, difficult to manoeuvre and had no satisfactory brakes. Also it literally, very quickly, ran out of steam.

Up until then Mr Cugnot had been backed by Louis XV’s War Minister, Duc de Choiseul. But the Minister fell into disgrace and was dismissed, which also meant Cugnot had to abandon his project.

His wagon remained stationary, in the ancient military depot, the Arsenal de Paris, for over thirty years before it was taken into safekeeping by the Conservatoire des Arts et Métiers in 1802, where it is still on show to the public at their museum in the 3rd arrondissement in Paris.

In 2004, at the bi-centennial anniversary of the death of Cugnot at the town of his birthplace of Void-Vacon, Meuse, the mayor, André Jannot suggested to a local engineer that he organise the construction of a modern replica.

In 2007, the Ecole des Arts et Métiers-Paristech put its students to work on the project, which took three years to complete.

In September 2010 it took to the road... and it worked, proving it was a viable prototype.

Since then the association which looks after it, Le Fardier de Cugnot, often takes it out for demonstrations and you can see it in action online here.

Most herbes de Provence sold in shops are not authentically French
17 September 2021
More from French Facts
More from Connexion
Get news, views and information from France
Join the newsletter
Subscribe to The Connexion