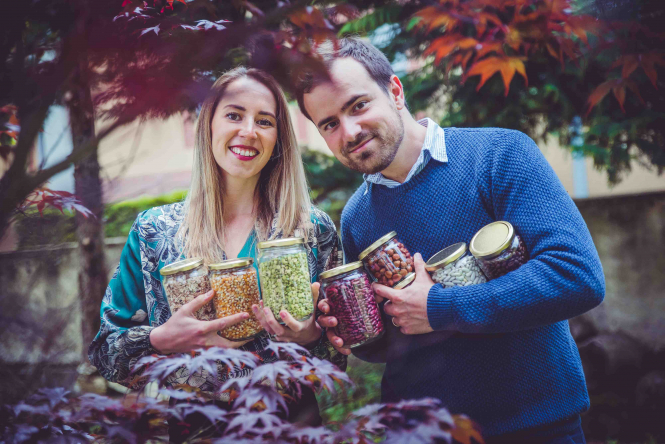 There are a growing number of ecological zero waste “Drive” shops where you order online and go to the pick-up point to collect your shopping.

Not only are the products local and often organic, but you buy your goods in reusable jars and bottles to reduce waste, which you take back to be washed when you make your next purchases.

The first to open was Le Drive Tout Nu in Toulouse in 2018. As marketing manager, Léa Robine, says it is most likely not just the first in France, but the first in the world:

“The idea came from co-founder Pierre Géraud. He had travelled in underdeveloped countries and saw appalling piles of rubbish caused from packaging and realised that this problem, though largely hidden also exists in Europe.

“Organic and zero packaging shops were thriving in town centres but he thought he could make the concept easier for the customer by using the “Drive” system popular with big name supermarkets.

“He and his co-founder wife Salomé deliberately chose a site on the outskirts of the city for people who could not easily get into the centre and who could stop off on the way home from work. It was an immediate success.”

She says their small premises quickly became cramped and they have plans to move. They offer 1,000 products including both food, household cleaning and bathroom products.

Dry goods come in jars, drinks in glass bottles, yoghurts in small glass pots and even face cream is in small jars.

The confinement period in March boosted the number of their clients and 60% stayed with them when the first lockdown ended.

To shop from Le Drive Tout Nu, clients order online, pick up their shopping from the premises and when they go back they return their empty jars and bottles and are offered a voucher worth €0.10 for each container.

These are sterilised and reused. Léa says costs are lower for the shopper for equivalent products and that research by Government environmental agency Ademe found that products without packaging are two to four times cheaper.

The young company has plans to expand next year by opening franchises in other parts of the country and giving structured advice to the numerous people who get in touch and want to open something similar.

Already many others have taken up the idea including Les Bocaux de Camille in Thionville, Moselle; Ze Drive in Floirac, Saint-André-de-Cubzac and Libourne, Gironde; Drive en Pot in Albi, Tarn, and La Fourmilière in Caen, Calvados.

This last was opened just over a year ago by 28 year old Axelle Vermoesen who wanted to do something to help farmers get a decent return from their work: “I started out in banking, then worked in horse auctions but decided to give it all up to encourage people to buy locally. Farmers are in the only business where producers cannot price their own products.

“I chose the Drive system because when I was working I had no time to shop in the ecological way I wanted and this makes life easier for busy people.”

She started out cautiously with 200 products. Now she has 700. She prepares around 120 orders a week.

On your first visit you add on €1 for each container, but you get that back when you return them. She hopes more people will take up this quiet revolution to change our consumer habits: “The great thing is that people enjoy this way of shopping.”

French nursery looks after Christmas trees for next year