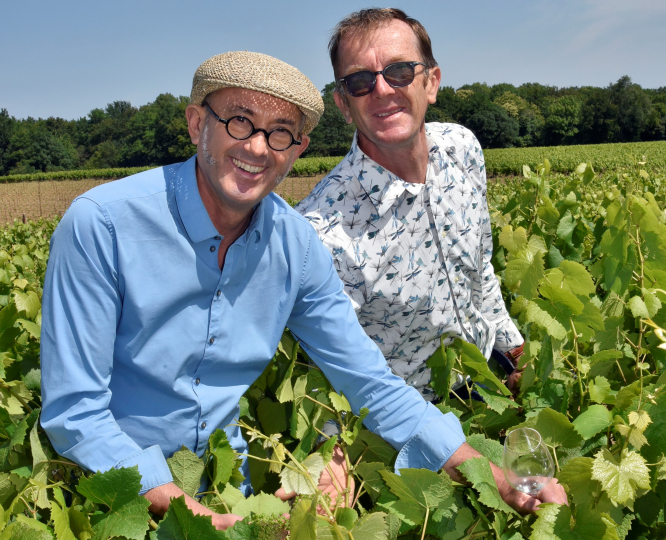 The royal wine that has been reborn once again. Pictured: Jean-Michel Poiron-Dabin with brother Laurent in the vines. Connexion October print edition
By Connexion Journalist

The Berligou grape, first rescued in the 1930s in a field of brambles then nearly lost again in World War Two, when an experimental vineyard was grubbed up, is now being enjoyed as wine again thanks to the work of several remarkable growers and vintners.

Jean-Michel Poiron-Dabin of Domaine Poiron-Dabin, south east of Nantes, said the grape was introduced to the region, probably from Eastern Europe or Russia, in 1460. Charles Le Téméraire, Duc de Bourgogne, gave vines to his cousin François II, Duc de Bretagne, as a present to mark their alliance against Louis XI.

At the time, modern France was divided into three parts, with the two dukes controlling at least as much territory as the French king, Louis XI. François II’s daughter, Anne de Bretagne, later married two French kings, Charles VIII and the Louis XII, helping to unify the country. She insisted that Berli­gou wine be served wherever she lived, spreading its fame. Later French kings discovered its charms, including Henri IV in 1598 when he was in Nantes to sign the edicts to recognise Protestants.

He declared it one of the best wines he had tasted and it officially became a Vin des Privilèges, meaning it could only be drunk in the royal court. Louis XIV visited Nantes and ordered a supply for Versailles. Mr Poiron-Dabin, who runs the domaine in the heart of the Muscadet Sèvre et Maine vineyards with his brother Laurent, said: “The special status meant it was never widely planted and it remained grown only around royal properties in Nantes.

“During the Revolution, Nantes was very revolutionary, while the countryside around it was against the Revolution, so passions were inflamed and royal symbols in Nantes, including the chateau and the vineyards, were left in ruins, and Berligou was one of the victims.” In the 1930s, a local grower, the Comte de Camiran, and a nurseryman specialising in vines, Joseph Picot, started looking for traces of the variety. In a field, covered in brambles, they found some wild vines, which corresponded with the history book descriptions.

From those, Mr Picot grew 170 plants, enough for an experimental vineyard, plus five he kept in his nursery. In 1940, a new estate manager, an Austrian refugee, misidentified it as a poor lot of the Melon de Bourgogne variety and uprooted the vineyard, replanting with Muscadet.

Mr Picot started multiplying his five Berligou vines. Jean-Michel Poiron-Dabin heard of them in 1993 and started a fight to have the variety recognised by the authorities. That happened in 2001. Mr Poiron-Dabin said: “I am an avid gatherer of varieties, and this has such a good story to go with it. Overall we have a dozen different varieties, so we were able to risk growing one more. It was well worth the gamble.”

Berligou grapes are very dark, and sweet enough to be eaten as table grapes. The dark red wine, he says, is “like a good wine from the south of France, rather than anything from the Loire, Burgundy or Bordeaux. It has mainly cherry and chocolate notes, a bit like a Cahors, and is elegant and versatile enough to go with either a strong flavoured beef joint or a fine chicken.”

The domaine makes both a red wine and a rosé and is even experimenting with a sparkling wine, with prices of €15 for the red, €10 for the sparking and €6.50 for the rosé. He said: “We might make royal wine but the prices are for commoners.”

Are hand-picked grapes the hallmark of a true quality wine?