Cookie Consent by FreePrivacyPolicy.com 12 French expressions to tell someone to be quiet French News and Views in English | The Connexion
8 may 2021
Classifieds Currency exchange Newsletter
Login Register BASKET
Facebook Twitter

12 French expressions to tell someone to be quiet 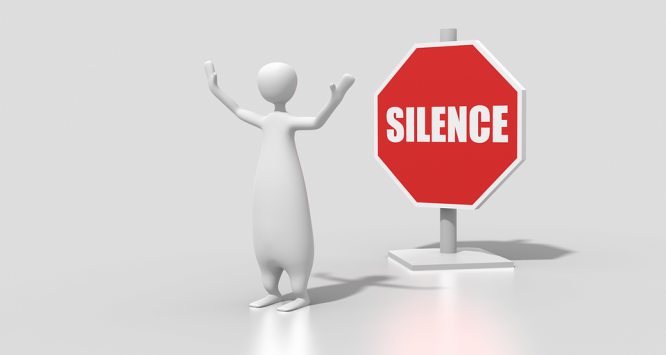 It is the equivalent of ‘shhh’ in English.

Be quiet. It is a common way to ask someone to ‘shut up’. To be more polite, you could add ‘s’il te plaît’ or ‘s’il vous plaît’ at the end.

Literally to lower the cackling or clucking. In the 15th century, caquet meant cackle (as in the sound made by a chicken) but also chatter. Before that, we used to call a woman who speaks a lot une caqueteresse. The expression rabaisser le caquet – or sometimes rabattre le caquet – means to put back someone in his/her place.

To close one’s valve. This means the same thing as the previous expression. However, clapet refers to the mouth opening and closing. The English equivalent would be ‘shut your trap’.

This literally means to buckle it. The English equivalent would be to zip it.

Literally: close it – it referring to the mouth.

Your mouth. It is more polite than ‘ta gueule’ as gueule refers to the mouth of an animal.

This is not the most well-known expression but it can sometimes be used by children, who also like to say ‘pouet pouet camembert’ (pouet refers to the noise of a trumpet or a squeak made by a toy).  It comes from the older expression ‘ferme ta boîte à camembert, tu l’ouvriras pour le dessert’ – literally close your camembert box, you will open it for the dessert. It is said that camembert refers to bad breath which can bother people.

Motus is a word that appeared in the 16th century and was added to the already existing expression bouche cousue (literally lips sewed). It comes from ‘mutus’ which means mute. It is generally used when you want someone to keep a secret or not speak. The English equivalent would be mum’s the word.

To hold one’s tongue. This means to hold yourself back from speaking and not to reveal something.

Literally to nail the beak – the beak refers to the mouth. This means to make someone be quiet.

Finally a piece of advice – before you blurt out something you might regret, a French proverb advises Il faut tourner sept fois sa langue dans sa bouche avant de parler (you must turn your tongue in your mouth seven times before speaking), meaning you should think carefully about what you are going to say.

This originally comes from the Bible, where it is attributed to King Solomon.