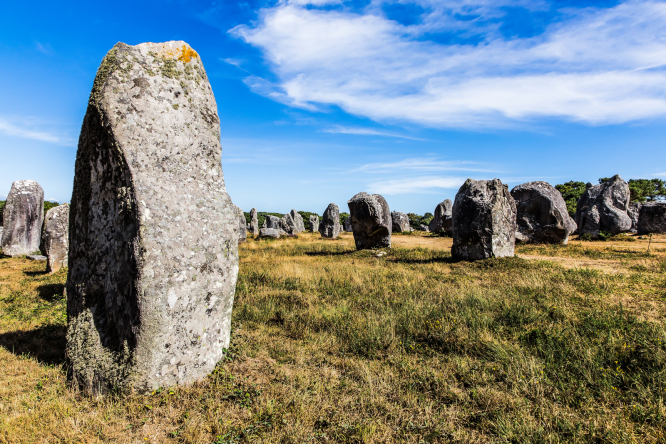 Morbihan in Brittany is exceptional for the sheer number and variety of its structures. Pic: Armin Binz / Shutterstock

They are older than Stonehenge – and more extensive – but Brittany’s prehistoric stone monuments do not currently share the same heritage status as their famous UK counterpart.

That could all change if the Morbihan department, which, with 550, has a higher concentration of megaliths than anywhere else in the world, succeeds in a Unesco bid to have the whole area recognised as a World Heritage site.

There are megaliths in many areas of France, including in the Lot and Aveyron, but Morbihan is exceptional for the sheer number and variety of its structures.

They are also notable for their remarkable engravings, making up 70% of the world’s engravings of this kind from the period.

Olivier Agogué, director of two of the sites in Morbihan – Carnac and Locmariaquer – says the structures tell an extraordinary story, made more impressive because no two are alike.

“They vary from a single standing stone to complex sites such as Carnac.

“They date from the Neolithic period, 5,000-3,000BC, when man became sedentary and settled to become early farmers. This was before Stonehenge, which was erected in the late Neolithic period (around 2,500BC), and well after the cave paintings at Lascaux (around 20,000BC) when man was still a hunter-gatherer and nomad.

“The Morbihan megaliths are some of the first examples of architecture in France. There was thought and organisation behind the use and placing of the stones.”

Mr Agogué says there could be many reasons why the area, in south Brittany, was such an important settlement.

“We cannot know for sure, because there are no written records, but we know it was when sea levels were rising to create the Gulf of Morbihan. That must have been very spectacular and perhaps made it appear a special place.”

Research into the area and its early architecture shows it to have been a complex territory with great symbolic power. Carnac, in particular, is unique in the world, says Mr Agogué.

“It is made of 3,000 stones standing in lines, measuring 4km in total.

“We believe there was probably a centre of power here, with a sizeable population to create the site.

“We found an axe made of polished jade, which must have come from the Italian Alps, and beads made from callaïs, a green stone from Spain, involving massive distances at that period.”

The stones at Carnac are made of local granite, so they did not need to be moved far, unlike some of those at Stonehenge.

They were placed in order of size, indicating there was a planned design, and theories abound as to what might have inspired it.

“There have been suggestions of connections with astronomy, but I am not convinced. We have carried out many experiments, but although there are some occasions when orientations line up, mostly it does not work,” says Mr Agogué.

“The geographical position is interesting as the site is in a zone between the coast and the interior, so perhaps it was there to mark a border.”

There are also tombs at Carnac. One is a man-made hill constructed in around 5,000BC, which now has a chapel on top.

It is 125m long, 58m wide and 10m high, and shows builders were skilled enough to produce a large burial place with a central chamber for one or several people.

It also suggests that society was hierarchical, as burials of this type were reserved for very few. It is here that treasures such as the polished jade axe were found.

At Locmariaquer, there are three separate monuments: a menhir (a tall, shaped standing stone), a dolmen (a type of single-chamber megalithic tomb), and a tumulus (a mound of earth and stones raised over a grave or graves).

The menhir is broken now, and lies on the ground in four pieces, but once would have stood 20m high, weighing 300 tonnes.

The stone it is made from can only be found 10km away, so somehow it would have had to be transported to the site, and then raised up.

The dolmen, called La Table des Marchands, was originally excavated in 1811 in an effort to reach the gold in the tomb.

It was left exposed, without its outer covering, until the 1980s and 1990s, when it was covered over again with small stones, as it would have been originally. It also boasts highly unusual engravings on the ceiling.

The largest monument is the Er Grah tumulus, which would have been a burial place for one person. A large pendant made out of green stone was found here.

Dolmens, says Mr Agogué, show great architectural skill. The builders had to know exactly how to place the stones.

All of this architecture employed drystone techniques – no mortar was ever used. “In the Morbihan, these monuments are made even more spectacular by their engravings,” he says.

“The best example is the cairn of Gavrinis on one of the islands in the Gulf of Morbihan. The engravings are both geometrical and representative, showing axe heads and animals. There was no metal then, so they had to be made with stone tools.

“Experts have tried to recreate their methodology and have found it is possible by hitting a hard, sharpened stone with another stone to form the indentations. It must have been a very long process.”

However, he warns the inevitable extra tourism would have to be controlled.

“We tend to think monuments in stone will last forever, but they are fragile, and though we can monitor the main sites where visitors pay to enter, there are several smaller ones which anyone can visit.

“It is very, very difficult to protect this part of our important heritage.”