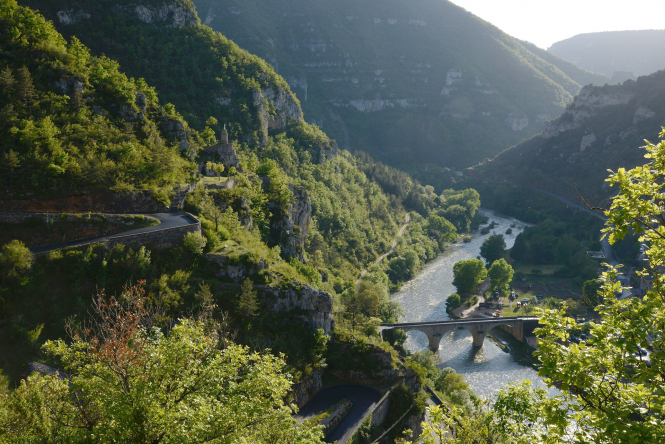 The beautiful Gorges du Tarn are part of the mythical, magical Cévennes from where ancestors of Tracy Chevalier are believed to hail
By Jane Hanks

I met Tracy Chevalier at the Parisot Literary Festival in the Tarn-et-Garonne. It is a bilingual festival, which, despite being a very small event with about 200 people attending each year, attracts well-known British authors such as Kate Mosse, Helen Dunmore and Adam Thorpe for its intimate style and beautiful setting in a hilltop village.

Tracy Chevalier’s books are read around the world and she has a strong following in both France and the UK. She is American-born, but has lived in the UK since the 1980s where she first worked in publishing and then studied Creative Writing under novelists Malcolm Bradbury and Rose Tremain at the University of East Anglia before becoming a writer herself.

Her most famous novel is Girl with a Pearl Earring, the tale of a Dutch maid who becomes the model for one of the artist, Johannes Vermeer’s most famous paintings. It has sold over five million copies worldwide and was made into an Oscar-nominated film starring Scarlett Johansson and Colin Firth.

However, this best-selling author is very approachable, comes across as very natural, and is not at all the prima donna authoress who has had international success. In fact, when she was introduced on stage at the Parisot Festival by Beccy Speight, CEO of The Woodland Trust, she remembered how, at an event she was organising in the UK, she suddenly found the novelist putting out the glasses and bottles of water for the public, and said how typical this was of her.

The fact that she came all the way from the UK for a wet October weekend at what is a small event for her, shows how she has kept her feet firmly on the ground, and what really interests her is writing tales to tell her readers. She told me she was very happy to be there:

“I really like to vary what I do. Hay-on-Wye, Cheltenham and Edinburgh are all great in their way but they can be machine-like and to do a small one sounded quite blissful. Bigger is not always better. The weather in Parisot has not been all that good with a lot of rain. But each time it stops raining I realise how incredible it is here when the sun comes out.”

It was also an opportunity for her to meet a French audience. “All my books have been translated into French. I did a session here in my flawed French and yes, I found the readers asked the same questions as the English audiences and have the same perspective so the books work equally well in both languages.”

Tracy Chevalier does, in fact, speak very good French and will promote her books, when they come out, on the national French media with no need of an interpreter.

A debut set in France

Her first book, The Virgin Blue, was published in 1997 and is based in France.  She spent a lot of time in the Cévennes researching, not only for the novel, but also to look into the origins of her family name, Chevalier.

She knew that her father was born in Switzerland, and his family had emigrated to the United States in 1924. Before that, the Chevaliers had lived for centuries in Moutier, a small town in the French-speaking part of Switzerland.

The family legend was that they were all French Huguenots from the Cévennes region of southern France, who were forced to flee their homeland following the Massacre of St. Bartholomew in 1572, when thousands of Protestants were slaughtered in Paris and a wave of religious persecution swept through the country.

She says the idea came to her to turn it into a book when she was sitting in the British Library researching a project which was dull, and her mind wandered to her sister, who was making plans to move to France, and also to an upcoming Chevalier family reunion in Switzerland.

“It occurred to me that with my sister’s move, the Chevaliers would come full circle – France, Switzerland, United States, France. I thought, wow, that is really interesting. This movement of people over the centuries and then I wondered, do they take their family traits with them?”

She says the real work began in the summer of 1994, at the same time that her sister made her move. They flew out together; her sister went to her new home in the Ariège, where she still lives, and she drove towards the Cévennes to research the novel and her ancestors.”

“In the end I found out nothing about the Chevaliers in France. As the contemporary heroine Ella discovers in the novel, there are few surviving records from that time, and you have to have studied old French, and old handwriting for years to make sense of any of it.”

However, she discovered that the Protestant religion was very strong in the Cévennes and says that because of the mountains and its position away from major French cities, it is quite isolated.

When Protestantism began to spread from the cities to the countryside in the 16th century, it took some time to reach the Cévennes. But Cévenol people were notoriously stubborn and individual, and once Protestant ideas did reach them, it took root and lasted far longer than in other rural parts of France.

The famous Camisard rebellion of 1702-10, in which Cévenol peasants used guerrilla tactics against the King’s army in order to preserve their religion, is still a source of pride. She says that today there are still active Protestant churches in small villages like Le Pont de Montvert.

In the novel, Ella Turner is an American who moves with her husband to Lisle-sur-Tarn in the Tarn department (Occitanie).

She has strange dreams, which seem to link her to the past and eventually she is successful, unlike Tracy Chevalier, in tracing her past back to a family who were driven out of the area and did settle in Moutier.

In reading the book, you realise that Tracy Chevalier not only went to great lengths to research the historical background of her book, but that she understood what life in provincial France can be like, and how difficult it can be to settle into a new area.

She says she arrived in Lisle-sur-Tarn by crossing a long narrow bridge over the River Tarn and that by the time she reached the centre of town, she knew she would set the book there. “I really wanted to immerse myself in the France my family comes from and I discovered that the Cévennes is a lovely part of the world.”

One of the passages which shows she really understands la France profonde is where Ella goes to buy a croissant in the bakery and gets a frosty response:

“French transactions fill me with hilarity. When you go into a boulangerie there is often a woman of a certain age who talks half an octave higher than I would talk. There is a formality and politeness which makes you feel really foreign and not necessarily welcome.

“You can go into a clothes shop and you’re not even allowed to touch the clothes. However, this bothers me less now, perhaps because I am older and I can see it as funny and not personal.

“Once you have got through that sometimes seeming coldness, there is, as Ella finds, a real warmth and welcome from the local people.”

Tracy Chevalier had come to the Festilitt at Parisot to discuss one of her most recent novels, At the Edge of the Orchard, which has as its theme, the early pioneers in the 19th century who sent new species of trees to Europe from the USA, such as the giant Redwoods.

Huge 40m specimens can still be seen in the arboretums of France (see French Living November 2017) and the UK, which were planted from saplings or seeds shipped from the United States at that time. All Tracy Chevalier’s novels are historical and she spends a great deal of time in research, which she explained, often throws up details which are stranger than fiction.

“My research is vital and sometimes I find out stuff I could never have made up. For example, I found out that when the huge Redwood trees were first discovered in America, two brothers actually cut one of these giants down to see what it was like and made the stump into a dance floor and they made the trunk into a bowling alley. It was just crazy and, of course, I included that in At the Edge of the Orchard. Sometimes the truth is crazier and that really helps me a lot.”

She says the story is important. “The reader has to want to turn the pages to find out what happens and to learn the history behind it.”

Authors all have different ways of writing. She writes long-hand, with a disposable fountain pen, and types it into the computer at the end of each day. She does have a desk but usually writes on the living room sofa.

She says for her, getting her ideas down on paper is a visual experience: “I see the scene I am describing in my head almost as if it is a film, and then I write it down. The colour, light, smell, taste and what you hear are all important. I emphasize these elements to paint the picture.

It makes it more immediate so the reader can relate to elements, like the smell of cooking that they are familiar with, even if the lifestyle I am depicting is very different from our own.”

She says she does not know the exact story plan when she starts writing: “In general I know the aims of the story but I don’t know the details.
I put the characters in at the beginning and then as I go along I see how they develop.

“Sometimes it is not at all in the way I imagined at the beginning and instead of being a main character as I originally attended, someone might be written out, or they may become more important in the story.

I always know what each one feels like, but they remain a little elusive. If I look at them they dart away. I can just see them out of the corner of my eye and I just get a sense of what they look like.

The novel she is working on at present is about Winchester cathedral: “At the moment, I am learning about how cathedrals are run and about embroidery and bell-ringing. The book is set in the early 1930s and is about a group of women who embroider kneelers, which are still in use today and the backdrop of the story is the rise of German fascism and how, in their own small way, my heroine Violet Hargreaves and her friend and unlikely bell-ringing hero Arthur, decide to respond.”

Two of her novels are linked to France, The Virgin Blue and The Lady and the Unicorn. So are there any plans for any others? “I don’t know. I have always loved Chartres cathedral. But as I am currently writing a cathedral book, we will have to see.”