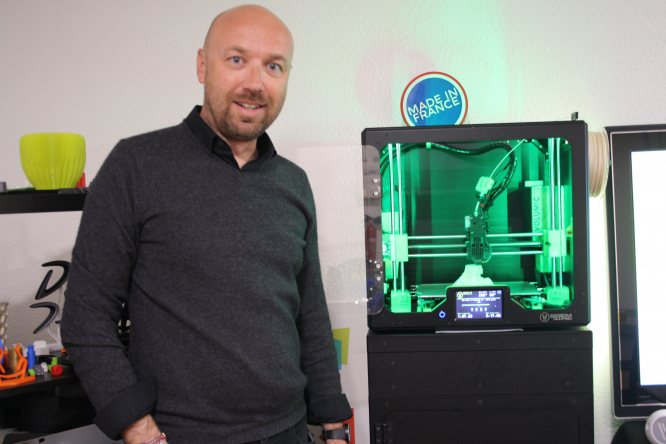 A 3D PRINTER company that presented its products at an Elysée Palace innovation event has been running 80 printers day and night to provide supplies for hospitals and laboratories fighting Covid-19.

Volumic 3D has been making test tubes and face masks, as well as pieces for ventilators, sending them across France and Monaco.

Stéphane Malaussena, co-founder of the Nice-based start-up, said labs were the first to make contact because they needed test tubes.

The company’s machines can create objects in less than 30 minutes.

Earlier this year, Volumic 3D showed them off to President Macron, Brigitte Macron, and 5,000 visitors during the Grande Exposition du Fabriqué
en France.

Previously, the firm had won two innovation awards at CES 2020 in Las Vegas.

Mr Malaussena said: “We often take part in innovation and technology salons, but it was interesting to highlight French savoir-faire.

“It was great to be part of this at the Elysée, a symbolic place, and to be able to discuss with the president and the biggest French brands.”

The company’s 3D printer caught the eye of the jury because of its speed and precision in creating an object.

It can make any item in 50 different materials, from plastic to wood, carbon, bronze, fibreglass or other eco-materials which can be recycled, or biodegradable ones. Objects can be made in different colours.

The printer can also work on two creations at the same time, and takes between 30 minutes to three days to make an object, depending on its size.

Mr Malaussena said: “At the time we launched this, in 2014, it was revolutionary.

“We didn’t have 50 materials at the time, but the machine has evolved with time.

“We first started with another 3D printer and we made our own, and we improved it so that it was better quality.”

Now the printer, which is priced at between €4,000 and €7,000, is sold to companies which need it to create or recreate objects.

“It has become an affordable tool for companies, which can do everything they want with it,” Mr Malaussena said.

“They often use it when something breaks and they need a new piece of equipment as soon as possible.

“Instead of contacting another business to have a new piece made, they make it themselves and can have it in a day. They save time and money.”

Volumic 3D works with big groups such as Decathlon, SNCF, Thales and Hermès, but also with smaller companies that need to create their own tools, such as medical or research centres.

“What is great with this printer is that it can be used in any field of business – in transport, electronics, education, dentistry, fashion,” said Mr Malaussena. 3D printers remain a mystery to most of the public, mainly because technical training is necessary.

Users need to be able to draw quite competently and use computer software to draw 3D objects. Users will also need to understand technical aspects of the machine.

The printer works with a thread which moves back and forth to create the object.

“When the thread gets blocked, people tend to panic. It is not complicated, but you need to know the basics,” said Mr Malaussena.

The company also offers workshops that help new users learn how to use the printers.

It has a centre in Saint-Rémy-de-Provence, in addition to its offices in Nice.