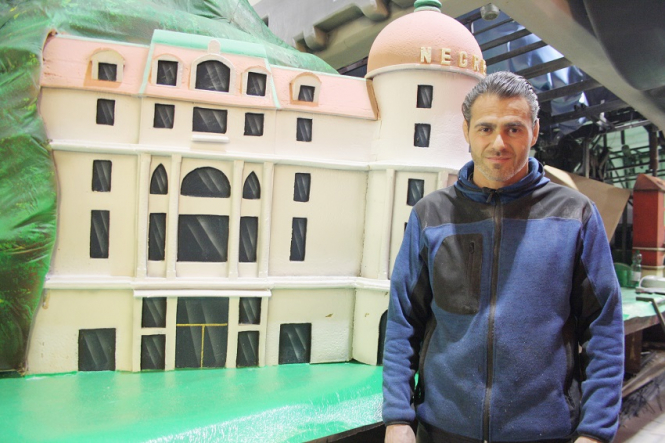 “I don’t really see myself as an artist but more as a luxury craftsman,” says carnavalier Cédric Pignataro.

He is standing in a warehouse where he and his staff at Nice Festivités (nicefestivites.fr) are preparing for the city’s carnival.

This year, the theme was the cinema. The company, which employs around 30 people, had two months to create six chariot floats, 96 so-called “big head” figures, three animated pieces and 16 flower chariots for parades in Nice from February 16 to March 2.

He started working as one himself in 1998.

His grandfather was in the business, as was his father, before he took over as head of the family company.

“Of course, I had a certain family duty to continue the tradition but I did try other jobs and the only thing I could think about was creating pieces for the carnival,” he said.

There is no single school or course available to become a carnavalier, a job which has Unesco “living heritage” status.

It is similar to that of a set designer for a movie.

Practicality and versatility are important – and, obviously, you need to be good with your hands, as most of the work involves sculpting, welding, painting and even sewing.

Courses in those areas are available all over the country. “You have to be multi-skilled,” said Mr Pignataro, since you can be asked to create a range of different ideas.

There are two key steps involved in creating a piece.

The first is called images consultation. The goal here is to have a wide range of ideas for that year’s carnival theme.

The second comes when the carnavalier has to interpret – and perhaps adapt –  an idea following a consultation.

When creating, “we have to work on everything from scratch”, he said.

“Sometimes it can be difficult to deliver what another artist has thought up.”

The company’s main activity is creating carnival floats and giant figures but it also creates decorations for special events and artworks on request. “Some artists have an idea and call us and we do it.”

They notably created the piece “I Love Nice” (pictured above) that can be found at the airport and on the Promenade des Anglais.

Mr Pignataro said: “Nice Carnival is a great shop window, so some clients see things they like and call us for other events. For example, we worked for a carnival in Corsica and in China recently.” Today, he is happy to be able to pass on his passion to others.

He has a daughter of 19 months and she loves playing with what her father creates.

“Young children are either scared or love it. My daughter loves it, so it’s a good sign!”

He said: “Being a carnavalier means so much and there are so many different roles that I would encourage anyone to think about it - and maybe come work with us!”