Trade has only 10 artisans left 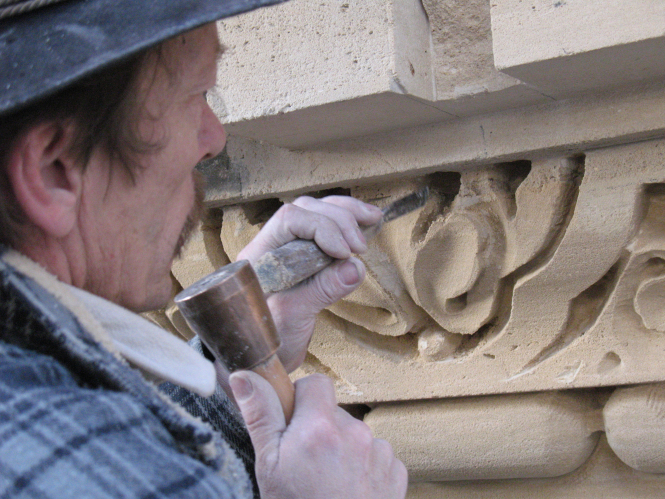 It is an indication of the rarity of this craft that there is no direct translation for maître âtrier in English.

An âtrier is a craftsman who constructs and restores traditional open fireplaces, using wood, marble, or stone. Part of the work is technical, concerned with regulatory compliance and safe evacuation of fumes, but the skilled part is decorative.

Anyone wanting to become a maître âtrier is seeking entry into an exclusive club.

Those currently in the trade say there are probably no more than 10 in all of France, most of whom work independently.

On the surface, that seems surprising, as the number of households using wood as their principal heating source has risen from 5.9million in 1999 to 7.5m in 2012, according to figures from the Agence de l’environnement et de la maîtrise de l’énergie (Ademe).

However, cleaner and more efficient stoves account for the majority of new installations: open fires comprised just 18% of the market in 2011, and the proportion has shrunk since.
Prospects for a maître âtrier are far from bleak, however, as there is a growing trend towards the restoration of existing open hearths, particularly in historic buildings, and this is such a specialist skill that master craftsmen will always be in demand.

They may find themselves working alongside interior designers, flooring specialists or other artisans dedicated to the work of bringing period features back to life.

To take up this trade you need a lively interest in the heritage of old buildings, and to be ready to work in a way that is respectful of different period styles.

You need a sense of proportion and an eye for detail. Being fit helps, as it is physical work, and you need to be able to collaborate with other craftsmen with different skills.

Finding a training course to meet your needs could be something of a challenge, as there are no courses aimed specifically at people wishing to become maître-âtriers.

The Lycée and Centre de For­mations d’Apprentis Gustave Eiffel in Cernay, Alsace offers a Certificat Technique des Métiers (CTA) Poêlier-Atrier, which would train you to install a specific type of Alsatian stove.

To enter you need to have completed collège in France, or equivalent elsewhere.

Many craftsmen will have taken a Certificat d’Aptitude Professionnelle (CAP) in stone masonry or marble work, which are more widely available, and will then have gained more tailored experience by working as part of a more general building and restoration company.

A specialism in stone or marble is probably, therefore, the best place to start.

Existing group of maîtres âtrier are all nearing retirement age

Henry-Didier Lutun is a master stone mason and sculptor who has, since 1980, also been a maître-âtrier. He collaborates with his son, Pierre Lutun and his company, Onyx Renovation, in the installation of traditional fireplaces that he restores. Most of his work is in Paris, but he also has a workshop in Corsica.

Becoming a maître-âtrier was a happy accident for Mr Lutun, who was working as a skilled stonemason for a large restoration company when he encountered another employee, a fireplace specialist who, at 60, was nearing retirement.

“When I first worked on fireplaces, I found it frustrating to hand over the in­stallation to someone else. Training with a maître-âtrier gave the skills to see projects through to the end. It was satisfying.”

Although his change was in some ways a logical progression, the extra skills to master the trade were by no means negligible.

“A maître-âtrier has to be versed in masonry, plastering, marblework, stonework, and tiling, and has to be sensitive to different period styles and materials, as well as having all the technical knowledge to ensure compliance with all current regulations.”

He estimates it took him about three years alongside experienced craftsmen to develop the additional skills he needed.

Most of Mr Lutun’s work is carried out in Parisian apartments with fireplaces in need of restoration or replacement.

The number of projects saw a marked decline after moves to ban open fires in the capital about three years ago and, even though the measure was cancelled before it started, it had a cooling effect on the market for traditional fireplaces, and trade has only recently begun to pick up again.

“Installing a fireplace requires a considerable budget. It’s not something you undertake if you are in any doubt.”

His work is a labour of love. He tries to use only authentic, period materials, which are in short supply.

Fireplace bricks are recovered from 18th century bread-ovens, prized because of their irregular shape; the last French company making back plates recently stopped doing so, making them harder to source, and some pieces, such as the metal ‘curtains’ each side of the hearth, simply no longer exist.

The results make it worthwhile: “It’s a beautiful object and it brings warmth into a home,” says Mr Lutun.

The decline in skilled craftsmen is of concern. “There are about 10 of us, and we’re all nearing retirement,” he says but adds that taking on a full-time apprentice is not an affordable option for someone working on their own.

He advises anyone looking at the craft to undergo specialist training in stonemasonry or marble work, then, once working, preferably in a restoration context, take time out to learn the additional skills by working alongside a maître-âtrier.