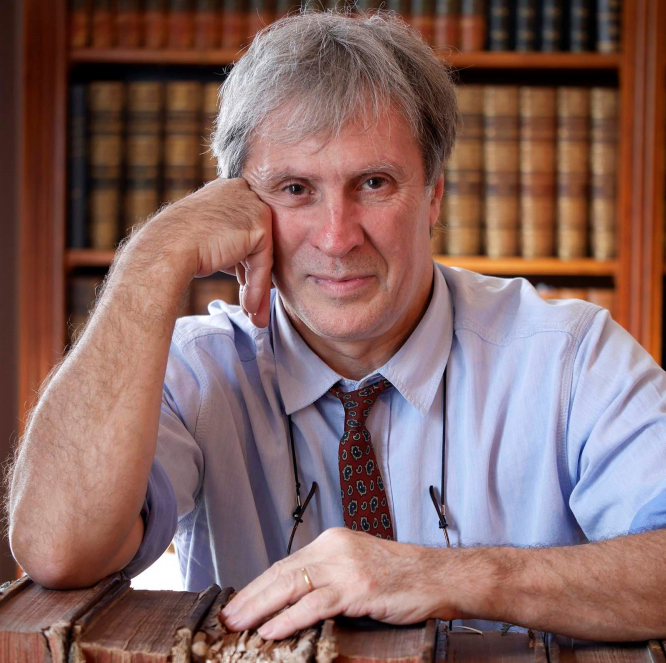 'British traditions are charming to us as well: British teatime, that British reserve. Downton Abbey was the most beautiful series ever, my wife thought' Pic: Jean Pruvost / Wikipedia / CC BY-SA 4.0

Language lover Jean Pruvost is an authority on dictionaries – of which he has a personal collection of 10,000.

He describes it as a “craze” that started “like everyone else, with a Petit Larousse”.

The question of accents when French is spoken by English-speakers or when English is spoken by the French also fascinates him. “What gives our respective charm is major differences which are fundamental to the shape of the language and the way in which we speak,” he said.

“First, the French have a language that is quite different in Europe because we don’t have stress on certain syllables, whereas in English stresses are strongly marked.

“For example, if we say anticonstitutionnellement, there’s no real stress anywhere [compared to anti-constiTUtionally]. It makes our way of speaking, compared to English, a bit monotonous but also rather soft, which can give it an attractive quality.

“What adds to this is liaisons: words flow into each other without emphasising initial vowels, apart from a few words like haricot where you are supposed to say les ’aricots, though people forget and say lezarico.

“It’s not vous avez but vousavez. You can’t tell where one word starts or ends.”

On top of this, he said the French are mostly “incapable” of saying the th in English, with the tongue between the teeth. This led to Voltaire, then aged almost 80, saying that he could not speak English because he had lost his teeth.

“This perhaps adds to the ‘charm’, a bit like a lisping child mispronouncing a word.

“But there’s an opposite charm when an English-speaker speaks French.

“What appeals to us is the stresses you add in where we weren’t expecting it – all the more as we have around 60% of our vocabulary that is in common [eg. vocabulary and vocabulaire]. It’s interesting to me as a language historian that sometimes your stresses represent the way the word used to be said in French, and we can still sometimes hear it in regional accents, though they are being lost as French becomes more standardised. For example, fleur would have been fleu-oor.”

The next difficulty for the British is the precise pronunciation of French vowels, such as the u and ou or nasal vowels like on, un and ain, which do not exist in English.

These sounds encourage the French to speak with the sound focused at the front of the mouth, Dr Pruvost said, whereas English-speakers typically speak from the back, giving a weightier sound.

“You hear it in public transport – especially from Americans, where this way of using the voice gives force to the voice, making the lungs a resonating chamber.

“Many English-speakers have magnificent singing voices – country and folk music singers, like Joan Baez, for example. We have fewer of these natural singing voices.

“There’s something that comes out of the musical power of the English language.

“I hear it strongly in Johnny Hallyday – which I think is down to him spending much of his childhood with an American father figure, Lee Hallyday.

“What gives charm to English-speaking singers is also the way they play on the stress in the words. It gives a natural rhythm to the language that we don’t have. “There is also an influence from the personalities we associate with the language.

“Jane Birkin was charming when she came over to sing with Serge Gainsbourg, and her little accent pleased everyone. Vice versa, when a sex symbol like Brigitte Bardot toured in the US, her way of speaking was sexy, but she was too.” Dr Pruvost said the images of the country can also have an influence. For example, France has long been associated with love.

“However, British traditions are charming to us as well: British teatime, that British reserve. Downton Abbey was the most beautiful series ever, my wife thought.”

France’s tendency to run sounds together without stress makes it unbeatable for wordplay: “You don’t say des mitrailleuses [machine guns] but insectes moqueurs [because it sounds like mites railleuses, mocking bugs]; you don’t say des abricotiers [apricot trees], but des petites maisons sur la côte” [it sounds like abris côtiers, coastal shelters]. English can’t compete, but you make humour out of situations instead.”

Dr Pruvost added that the sexy aspect comes from our respective differences – so there is no point worrying about having a “perfect” accent. “We won’t manage it, and we won’t be more charming for it.”

Dr Pruvost said that for the French there are associations with each accent – German tends to be seen as harsh, perhaps due to World War Two. “An Italian has a ‘singing’ sound, a Russian sounds plaintive – but an English accent pleases us.”

Within France, he said the northern French love the accent of the Midi, though this is not generally reciprocated. An Alsace accent “makes us smile but is not as charming”. A strong Quebec accent is seen as especially hard to understand.

He said one national quirk he has noticed about British English is the importance of accent in social class, whereas you are more judged on your spelling in France.

Dr Pruvost is confident Brexit will not affect the charm of an English accent.

“It’s deeply rooted. Look how much we all loved the Beatles, Rolling Stones and Elton John: nothing will change. And we’ve nearly all been to Britain and come back charmed by the manner of the people we met.”

Learning languages ‘is easier with hypnosis’

WHO recommends lifting of international Covid travel bans
23 January 2022
More from Opinion
More from Connexion
Get news, views and information from France
Join the newsletter
Subscribe to The Connexion