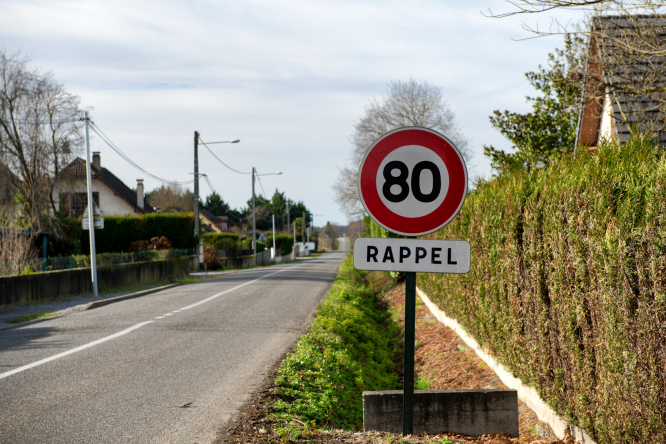 'The original 90kph signs were trashed, new 80kph signs manufactured, installed and then trashed in their turn, and now shiny, brand new 90kph signs have been made to replace those too' Pic: PHILIPIMAGE / Shutterstock

Reducing speed limits must have looked like low-hanging fruit after Emmanuel Macron was elected four years ago, full of his ‘make the planet great again’ plans.

After all, cutting the speed limit would save lives as well as limiting petrol consumption.

It would be an easy way to bolster his green credentials and get down with the climate-conscious youth.

This, of course, was before he had lost his shine with the latter through a series of clumsy missteps, not least of which was refusing to answer to his popular nickname, Manu.

Yes, in those halcyon days, he was keen to be everyone’s saviour. By lowering the speed limit and raising the price of fuel, he obviously figured he would soon get polluting cars off the roads.

Except it didn’t quite work out like that. Macron was clearly oblivious to a) the lack of alternative transport, and b) the financial strain inflicted on households by hiking petrol, diesel and heating fuel prices.

Even when the gilets jaunes took to the roundabouts, he did not seem to realise that he had hit a wall.

Once it began to dawn on him, he neatly passed the buck and, conveniently for him, the whole issue was drowned out by the global disaster of Covid.

Now the hated speed reduction to 80kph is no longer his decision – go and shout at someone in your own department if you do not like it.

Perhaps he thought people would give up, but this is France and there is nothing the French enjoy more than arguing with authority. Voters harassed the departments, and so far 33 of them have capitulated, raising the speed limits back to 90 again.

Except – and this strikes me as typically French, and I can say this as I am French – the local authorities can only make decisions on local roads.

So now some departments are in the ridiculous situation of having a higher speed limit on back roads than on main (national) roads. A recent poll showed that 80% of drivers have no idea which departments have stayed at 80 and which have gone back to 90.

Worse – especially for a president who said he wanted to ‘make the planet great again’ – think of all that scrap metal!

The original 90kph signs were trashed, new 80kph signs manufactured, installed and then trashed in their turn, and now shiny, brand new 90kph signs have been made to replace those too.

Honestly, if you put it in a novel, an editor would tell you it was too absurd, and would never happen in real life.

But it did... and, as more departments change back to 90, it will go on happening.

The only people who can possibly be enjoying this whole stupid palaver are the folks who make the road signs.

23 hours ago
4
Undelivered letters: Why is France’s postal service struggling?