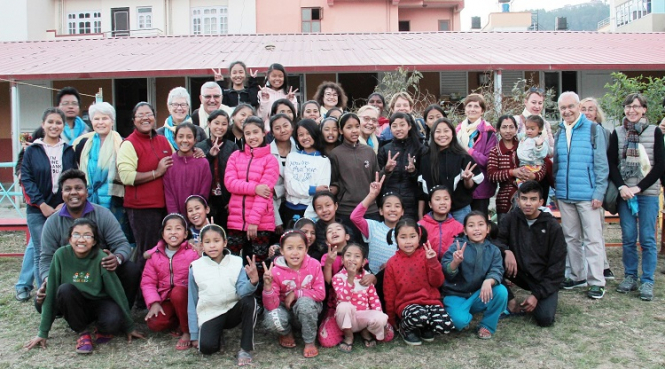 It helps girls from poor backgrounds to get an education they would otherwise not get. Instead they would have to stay at home, helping look after young children, fetching water, looking after the animals, or out on the streets earning money for the family.

If children from a poor family do go to school, boys are given priority.

At present, 43 girls aged from five upwards are supported by the charity.

The younger ones live in a hostel, built after the earthquake of 2015 destroyed a previous one. They go to a local, private school, which gives them a broad education in English.

The older ones are training to be nurses, accountants or schoolteachers, among other choices.

Népal, Enfance et Lumière was started 25 years ago, after Michèle and Pierre-André Heller travelled to Kathmandu and struck up a relationship with a girl, Sushi, whom they found selling trinkets to tourists on the street.

They asked what they could give her as a gift on their departure and she said: “I would like to go to school.”

The couple visited the family, where the father was a drunk and the mother struggling to bring up six children, and gave money for Sushi to go to school. When they came back a year later, the money had been spent on other things and the girl was still on the streets.

The couple decided to set up something to ensure girls like her could get an education. Mothers are often grateful their daughters will escape their fate, as many are illiterate and struggling with poverty.

An educated daughter will be able to provide for them in old age.

Sushi now manages the hostel where the girls live.

President Marianne de Sacy has been involved since the beginning and said: “To raise money, we hold several events in France but our main funding for each child comes from sponsors, who follow their progress.

“It costs about €100 a month and covers the costs of schooling, clothing, accommodation, transport, outings and running the home. Donors can share a sponsorship between two or even three people.

“Once a year I take a group of sponsors to Nepal to meet their girls and when you see the smiles on their faces, you know you are involved in something which works.”

Ms de Sacy said that Nepal is overwhelming for first-time visitors: “You are struck by the beauty of the mountains and the monuments but also by the poverty and the way the Nepalese keep on smiling and enjoy the happy moments in their life to the full.

“We in the West complain about everything. They make the best of what they have. Nepal needs our help and the best way is to educate their children, so they can do something themselves for their country.”

The charity is always looking for sponsors, and welcomes smaller contributions.

community
charity
solidarity
More from Your News
More from Connexion