'I felt humbled by their sacrifice' 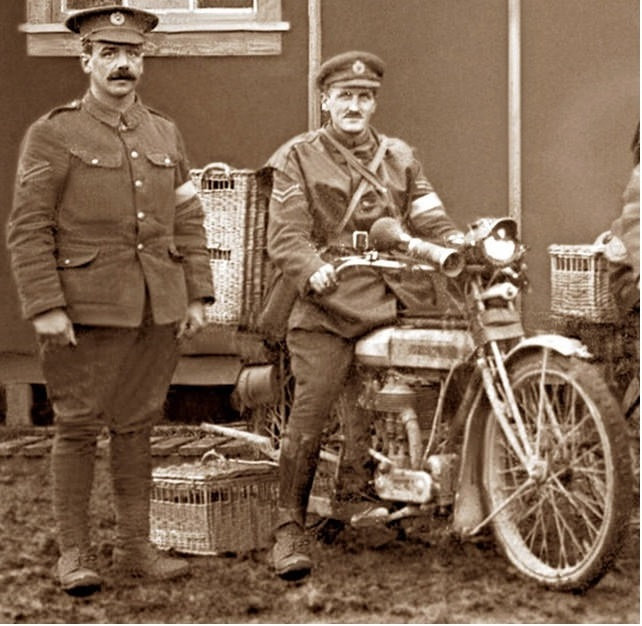 As reported, David Holdway-Davis, 20, joined motorbikers from as far afield as England, Australia, France and New Zealand at the Communal Cemetery in Abbeville at the start of a special journey in honour of the bravery of his great-great uncle, Corporal Oswald Davis.
Building apprentice David flew from Brisbane, Australia, to take part in the special trip. He said: "I can only imagine the hardship and suffering Oswald endured.

"On that first morning at Abbeville, as I stood in the shadow of the tall trees and immaculate gravestones of the men who died in such terrible circumstances near this quiet, atmospheric and impeccably maintained cemetery, I felt humbled by their sacrifice. It was the most moving experience of my life."

The group, including David’s father Philip, traced the route Oswald followed exactly 100 years ago, during the Battle of the Somme.
The memorial riders began their journey near Oswald’s first army muster site where, his training complete, he started his riding duties. Their next stop was Amiens, then Senlis-Le-Sec, and on to Thiepval, where Philip laid a wreath at the memorial.
In a speech at the memorial, Philip said: “This tribute is from the Royal British Legion and Oswald’s family for all the dispatch riders of World War One. We remember these brave men with thanks and pride.”

On July 23, the bikers reached Ypres, in time to attend the 8pm Remembrance Service at the Menin Gate.
Oswald survived the battle that claimed 1.3million casualties and went on to ride his bike through Belgium and Germany until he was demobbed. He returned to work in the family business in Birmingham and died in 1962.

He was a talented writer, and left an archive of work, including his war diary, newspaper articles and two novels. A copy of his diary is available to download from triumphonthewesternfront.com
In homage to Oswald, enthusiastic biker David borrowed a modern Triumph for the bike journey. He said: "It’s a lot more powerful than Oswald’s machine but, from reading his diary, I know that he was very fond of that wonderful old motorcycle and it didn’t let him down.

"Besides carrying a basket containing 28 pigeons, he somehow managed to do all his own repairs, drive through mud-filled craters, dodging shrapnel and bombs, and deal with lice, hunger and constant fear.
"His sense of duty was awesome. My generation can learn a lot from men like him. France is a beautiful country, and I am so grateful that I am able to visit. Thanks, Uncle Oz!”