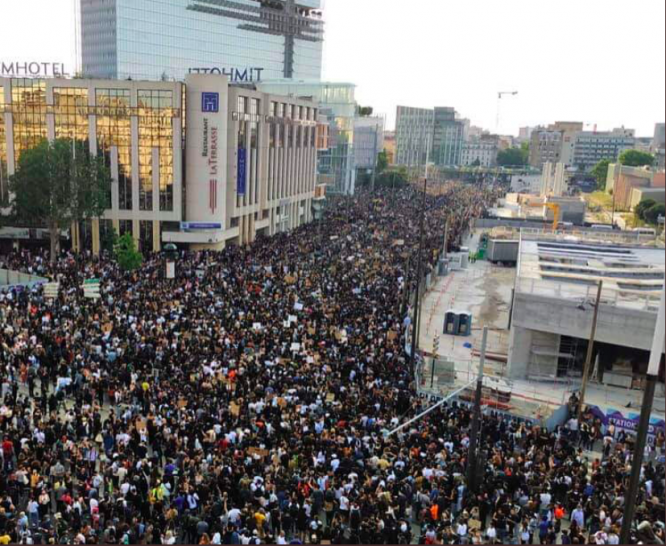 Around 20,000 people joined protests outside a courthouse in northern Paris. In Lille (Nord), there were 2,500 protesters, and hundreds gathered in Marseille (Bouches-du-Rhône) and Lyon (Rhône).

Protests went ahead despite a ban by police hours before it was due to start.

In a statement, the police cited coronavirus as a reason for not allowing the protest to go ahead. A police statement said: “[The protest was] not authorised by the order from May 31, 2020, relative to the health emergency, that prohibits all gatherings in public spaces of more than ten people.”

While the first few hours of the protests in Paris were peaceful, there were instances of violence later in the evening.

Police fired tear gas; and bikes, scooters and rubbish bins were turned into a barricade and set on fire. Protesters also caused damage to bus shelters and shop windows in the local area.

A total of 18 protesters were arrested.

This violence was condemned by interior minister Christophe Castaner. He tweeted: “Violence has no place in democracy. Nothing can justify the misbehaviour that occurred in Paris this evening, while gatherings in public places are banned to protect everybody’s health.

“I congratulate the security and emergency forces for their control and composure.”

Denials of racism in the police force

Earlier in the day Mr. Castaner had been questioned in the Assemblée Nationale about another incident of police violence.

A few days earlier a teen caught trying to steal a scooter in Bondy (Seine-Saint-Denis), had been seriously injured in one eye by police. The minister denied racism in the French police force, saying: “There is a republican police force in this country that protects women and men from everything, including racism.”

Head of the Paris police, Didier Lallement, also released a statement prior to the protest denying racism within his force.

In an email addressed to 27,500 members of the police force in Paris, he wrote: “The police in Paris are not violent or racist: they act within a framework of rights and liberty for all.

“There is no race in the police, any more than there are racists or racial oppressors. There are civil servants who are committed to liberty, equality and fraternity every day.”

Protesters in France came out in support of the Black Lives Matter movement which began in the US to highlight police violence against black citizens.

The current protests in the US were kickstarted by the death of George Floyd, who was asphyxiated as he lay on the ground while a police officer leaned on his neck for nearly nine minutes.

In France, while some protesters used slogans from the US protests, many called for "Justice pour Adama", or "Justice for Adama", in reference to Adama Traoré who died at the age of 24 after being arrested in Persan (Val-d’Oise) in 2016.

The cause of Mr Traoré’s death is still contested in France.

However, when he was arrested, he was placed in a hold known as le plaquage ventral. This is similar to the hold George Floyd was placed in when he died, with his chest to the ground, being restrained by the bodyweight of police officers.

After being arrested, Mr Traoré lost consciousness while in the police vehicle and later died in a nearby police station.

One of the organisers of the protest, Assa Traoré, sister of Adama, addressed the crowd gathered in Paris, stating many black lives are lost to police violence in France and the US.

She said: “Everyone here today is going down in history… This is just the beginning.

Yesterday’s protests came in light of new medical evidence, made public by Adama Traoré’s family, contradicting medical evidence used to rule that the three police who arrested and constrained Mr Traoré were not responsible for his death.

Instead, the report attributed his death to multiple suspected elements including the presence of medical factors such as inflammatory disease sarcoidosis and fluid retention in the heart, as well as “intense stress, “physical effort” and an “elevated concentration” of cannabis.

Mr Traoré’s family sought a second opinion from independent medical experts who found that Mr Traoré’s death was “the result of positional asphyxiation induced by lying in the prone position with weight placed upon the body. This constrained the normal exchange of air".

The report also found it was impossible for Mr Traoré to free himself from this position.

The Traoré family’s lawyer, Mr. Yassine Bouzrou, declared the new report proof that Adama Traoré had died as a result of police force. Magistrates now have ten days to respond.