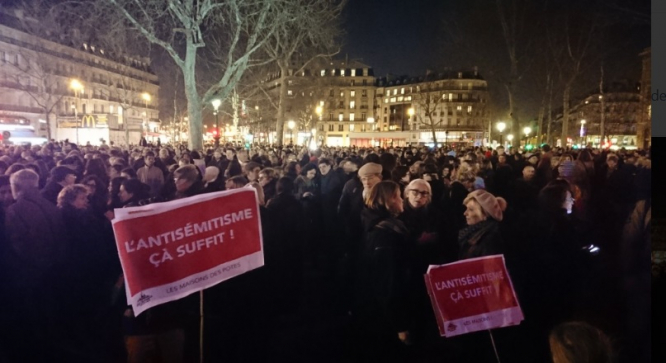 Peaceful protesters from many religions and none gathered in the city’s Place de la République last night (Tuesday February 19), after around 50 parties and organisations called for a show against anti-semitism.

Protests right now in France against antisemitism : below Nantes, Paris, Bordeaux and Nîmes. We must say No to antisemitism, no to racism. pic.twitter.com/T7jkaE04Su

Former presidents François Hollande and Nicolas Sarkozy were also reported to be there, as were numerous figures from the gilets jaunes movement.

Other protests were seen in cities including Lyon, Lille, Bordeaux and Marseille.

The same day, President Macron laid a wreath at the foot of the Holocaust Memorial in Paris.

The President said: “I express my total determination to fight against anti-semitism in all its forms.”

Writing on Twitter, he said: “Anti-semitism is a negation of everything that is France...The Republic is a [united] block against all of this.”

Anti-semitic acts have been on the rise in Paris in recent weeks. Similarly, the government announced a 74% jump in the number of such incidents (541 in total) reported across France in 2018.

Recent high-profile incidents have included the defacing - with a swastika - of a street artist’s painting of former politician and anti-Holocaust activist, Simone Veil; and the public abuse received during a gilets jaunes protest by the philosopher Alain Finkielkraut.

Yet, Mr Macron has said he is against a recent proposal to criminalise anti-Zionism.

At a press conference this week, he said: “I do not think that criminalising anti-Zionism is a solution.”