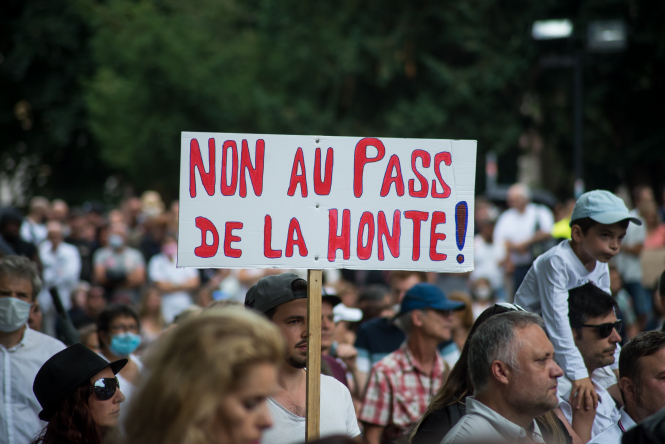 Protesters against the health pass gathered in Mulhouse on July 24 Pic: NeydtStock / Shutterstock

Some 200 protests against the Covid health pass are planned in France on August 14, gathering an expected 250,000 protestors.

This could make this weekend’s protests the largest since plans for the health pass were announced in July.

Numbers are thought to be increasing each weekend, which internal police information service Renseignement Territorial, has put down to the largely peaceful and calm nature of the protests, which has encouraged more people to take part.

This weekend, multiple protests are planned in some cities.

In Paris, three protests are scheduled at Place de Catalogne at 14:30 (led by Florian Philippot of the far-right Les Patriotes party), Porte Dorée at 11:30 (led by a gilet jaune activist) and Place de la Bourse at 13:30 (whose leader is described in the French press as a 'conspiracy theorist).

Around 17,000 protestors are expected to attend in the capital, figures similar to last weekend.

An internal Renseignement Territorial notice shared with police forces on August 11 predicted the scale and who may attend the protests this weekend based on previous protests, BFMTV reported.

The notice said that protests had been larger in the south of the country – a trend which is set to continue this weekend.

Relatively large protests are also expected in Nantes and Mulhouse.

High mobilisation against the health pass in the south is thought to be linked to the recent return of stricter health measures, such as obligatory mask wearing, in some regions with high Covid rates.

The notice also said that the most protests were likely to be, once again, attended by a wide social mix of people, often with no specific leader or manifesto, including many families with children and healthcare workers.

However there would also be some more 'radical elements', including those from the far right, far left, and what the notice described as 'the far yellow' (les ultra jaunes) referencing members of the gilets jaunes movement.

The notice said some gilets jaunes see the protests as a way of reigniting interest in their own causes.

This weekend’s protests are expected to be peaceful, but a risk of rowdy behaviour in Lyon, Nantes and Rennes has been flagged, as well as possible violent glashes between far right and left in Nantes and Nice.

Weekly protests against the health pass are expected to continue into September, when they may also be fuelled by people worried about issues around vaccination of children or health rules at school.