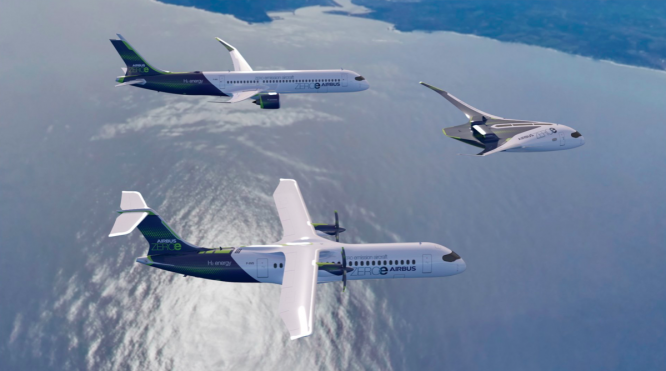 Two of the new Airbus models look like traditional commercial aircraft, but one has a more futuristic design.
By Joanna York

Airbus presented three new concepts for zero-emission planes yesterday (September 21). Two of the aircraft were traditional-looking - a turbofan capable of carrying 120-200 passengers, and a turboprop with propellers, for carrying 100 passengers.

The third “blended-wing body” model was more inventive, with a triangle-shaped, flying-wing design capable of carrying 200 passengers, and sails integrated into the main fuselage.

So excited to have shared our #zeroe concept aircraft with you!
Missed it? We’ve got you covered. Check this out

But this is only the beginning. Stay tuned for more in the weeks to come!
Learn more on our website: https://t.co/rl1CcXfsiK#ZeDay #ZeroEmissionsDay pic.twitter.com/iAMkofvz9e

As well as being the most unique design, Airbus engineers believe the blended-wing model has the potential to revolutionise long-haul air travel.

Director of engineering at Airbus, Jean-Brice Dumont, told news source Le Figaro: “The flying wing has an enormous capacity to stock hydrogen, with a good load-bearing capacity, and the possibility to expand into long-haul air travel. But it’s also the most disruptive concept, with big challenges that we need to overcome, notably aspects of stability and emergency evacuation.”

Airbus will now run air and ground tests on the new models, including tests on carrying cryogenic stocks of hydrogen on board from 2021. It hopes to finalise architecture plans for the planes by 2024-2025. Following on from this timeline, the company aims to launch a program to have eco-friendly aircraft in service by 2035.

The announcement by Airbus came 24 hours before American competitor Boeing was due to present the results of its own zero-emission plan: the ecoDemonstrator programme, centred on the 787 Dreamliner aircraft. Chinese competitor Comac and other companies are also expected to join the race to create zero-emission, hydrogen-fuel planes.

As the first company to put hydrogen planes into service, Airbus is expected to have a competitive advantage in the air travel market, and to attract younger travellers in particular. It will also have the advantage of being able to set norms in security and certification regulation for zero-emission travel for the industry.

Executive president of Airbus, Guillaume Faury, intends for his company to win the race. He said: “We plan to play a foreground role in the most important transition our industry has ever known. Our vision of a zero-emission future is bold and the concepts that we have revealed show the world an idea of our ambition.”

It is estimated that Airbus’ development of eco-friendly aircraft will cost around €10-12billion using internal funds and with support from the French government fund Corac, which is dedicated to aeronautical research.