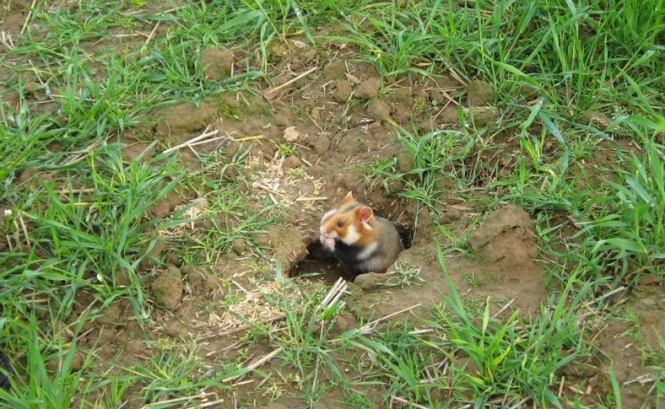 The hamster has been threatened for some time due to environmental pressures in the region reducing its habitat.
By Connexion journalist

The "Alsace Great Hamster" - also known as the Hamster of Europe, and the only wild hamster in Europe - can be identified by its black stomach, reddish back, and white patches on its nose.

The rodent used to be common in Europe, from Alsace to Russia.

But environmental pressure - from mono-culture to light pollution to industrial development - have seen it disappear from three quarters of its natural habitat in Alsace and Eastern Europe, according to the International Union for Conservation of Nature (IUCN).

On July 9, the IUCN put the hamster on its “red list”, meaning it is in “critical danger”. The association said: “If nothing changes, the species could disappear within the next 30 years.”

The species has also suffered from a drop in its reproduction rates, with each female producing five or six babies today, compared to around 20 each in the 20th century.

Putting the rodent on the IUCN “red list” may now have a positive effect, one specialist has suggested.

Julien Eidenschenck, specialist at French biodiversity office l’Office Français pour la Biodiversité (OFB) told the Agence France-Presse that the listing will “put the species back into the spotlight, which can only help with its preservation”.

The animal has been protected in France since 1993, and the country has put more conservation plans in place to “stabilise” the hamster population in recent years.

In 2011, the European Court of Justice rules that the country was not doing enough to protect the species, so in 2014, a €3 million, five-year scheme named "Alister", for Alsace Life Hamster - was introduced in the region, to help boost numbers.

However, the rodent has greatly suffered from its reputation in the 1970s, when it was seen as a pest that needed to be destroyed. In 1972, it was present in more than 300 communes in Alsace, compared to just 20 today.

The figures are based on the counting of new burrows - usually with an adult - that can be found after the rodents’ hibernation season in spring. Experts then use this number to extrapolate the estimated population number. Some 750 new burrows were counted in 2019.

Experts are now aiming to slow the decline of the species by releasing hamsters raised in captivity into the wild in Alsace, and working with farmers to improve the rodents’ habitat, by offering better protection against predators - such as foxes and cats - and diversifying their food source (as much of Alsace focuses on mono-culture of wheat or corn).

The latter point may be especially important, as a study - published in 2017 in the journal Royal Society Proceedings B - suggested that the animals could be suffering from a lack of vitamin B3 in their diet, due to over-reliance on eating corn alone.

Caroline Habold, a researcher at the multidisciplinary centre l’Institut Hubert Curien in Strasbourg, who took part in the study, told The AFP: “This deficiency means that females eat their young as soon as they give birth. We saw this in 90% of the mothers in the lab.”

She explained that a lack of protein in the animals’ diet - due to only eating corn or wheat - can lead the mothers to lose their maternal instincts.

The hamsters’ declining number is “at the heart of the conflict of land use between the economy and the environment”, the researcher said.

Environmental activists and researchers have especially condemned the plans to build a major bypass west of Strasbourg, which will pass through one of the few areas in which the hamster still lives and thrives.

€3m programme to save rare hamster