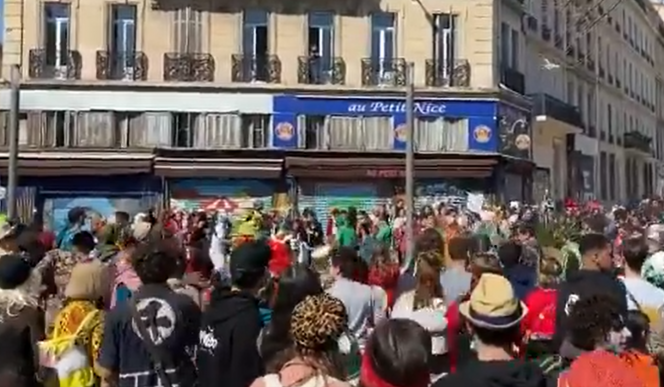 Authorities in Marseille have branded an unauthorised event in which some 6,500 partied in the streets as an 'unacceptable' breach of Covid-19 rules - and warned that legal action is likely to follow.

Police made nine arrests and fined dozens more as crowds of people, many of them not wearing facemasks gathered for the carnaval de La Plaine in the city centre on Sunday, despite the health risks. Many complained about restrictions on gatherings and the continued closure of bars and nightclubs.

Organisers had not bothered to formally notify authorities that the event, which was cancelled in 2020, was going ahead this year, reports said.

But officers did not move in to disperse the crowds until early evening.

Marseille mayor Benoit Payan voiced his anger on social media, saying on Twitter: “Nothing justifies that we undermine our collective efforts to keep the virus at bay.”

He ended a four-tweet thread in which he highlighted the health situation by saying "Marseille and the Marseillais do not deserve this."

Martine Vassal, president of the Departmental Council of Bouches-du-Rhône and president of the Metropolis, hinted that she intended to lodge a complaint on behalf of the latter institution: "Scandalised by what happened today in Marseille. Caregivers are putting their lives in danger and many cases of Covid are to be feared as a result of these actions. Irresponsibility at this level is criminal. All elected officials of Marseilles must condemn [this]. "

Prefect Frédérique Camilleri told La Provence: "I regret that everyone's efforts can be ruined in a few hours by a few thousand people who deliberately break the rules.

"We had put a police cordon around the demonstration which aimed to punish those who arrived without a mask."

And Interior Ministry spokeswoman Camille Chaize told Franceinfo radio: “It’s completely unacceptable at a time when all of us are making efforts, are adapting and organising ourselves to respect the different rules in order to fight against the pandemic.”

The Bouches-du-Rhône department is not one of the 16 areas of France currently under month-long enhanced lockdown measures but it is considered to be at 'high risk' of further restrictions due to rising case numbers.