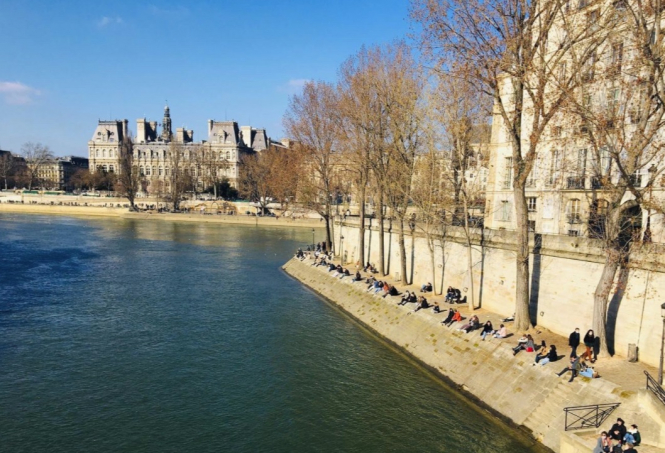 The new lockdown rules allow people in France to leave their house within 10km for an unlimited time, with only a proof of address
By Hannah Thompson

Several leading doctors in France have criticised the new lockdown measures in place in 16 departments as insufficient, with some saying they could even worsen the situation rather than improve it.

Prime Minister Jean Castex confirmed that “new measures to massively slow the epidemic” would be imposed for at least four weeks, with the lockdown starting in the departments affected on Saturday March 20.

Yet, the rules for leaving the house are more lenient than in previous lockdowns. People are allowed to leave their home during the day for an unlimited time within 10km, for exercise or to walk. They need to carry proof of address rather than an “attestation” form.

Government spokesperson Gabriel Attal told news service BFMTV that the idea was to stop people from meeting inside.

He said: “Today, the logic is, everyone stays at home alone, or goes outside. People who must maintain links [with others] and don’t want to stay at home alone, can see their loved ones as much as possible outside.”

He said that physical distancing and hygiene measures were still required.

Yet, some medical experts have said that allowing outdoor gatherings within 10km will barely reduce the epidemic “curve”.

Professor William Dab, epidemiologist and former director general of health, said: “We might be able to slow [the epidemic] a bit, but the epidemic situation is not going to improve quickly with these measures. There is a gap between the gravity of the situation, and the reality of the measures introduced.”

Professor Djillali Annane, head of intensive care at the Garches hospital in Hauts-de-Seine, said: “My first reaction when I heard the measures was to think: ‘Oh, we’re not confining, we’re deconfining’.

“We can continue to meet, to move around for as long as we want. There is a very high risk here of worsening the epidemic and health situation.”

Professor Jean-François Timsit, head of intensive care and infectious diseases at the Bichat hospital in Paris, said: “I really cannot see how, after four weeks [of these measures], the situation will be much better.”

Professor Dab added: “[These measures suggest] that the battle over contaminations is lost.”

He said: “[Now] there is no longer any objective being announced. There is a sort of resignation [from the government]; crossing our fingers that the healthcare workers and hospitals hold up.”

Dr Luc Dauchet, head of public health at the Lille CHU hospital, said: “We saw that the second lockdown had limited effect, so we are expecting a limited effect [this time around]. The 10km restriction is interesting, but we don’t start contaminating more once we travel 20km compared to 10km.

“It might work, but with a relatively limited effect.”

He said that the most important thing was to limit gatherings indoors, as “that is where we know there are the most contaminations”, but he said that the government had not made this “message clear or strong” enough.

He said: “If we look at all the recommendations and the impact they might have, we might even see a rise in the spread, not a slowing down.”

But Professor Arnaud Fontanet, epidemiologist and a member of government advisory body le Conseil scientifique, said that the measures needed to be given a chance.

Speaking to newspaper le Journal du Dimanche (JDD), he said: “[The government] is taking a rational approach, a double assumption. On the one hand, the significant impact of lockdown on the public’s mental health. And on the other hand, the way that SARS-CoV-2 spreads.

“The great majority of contaminations happen in enclosed areas.”

Professor Fontanet added: “We must insist to people that they limit their interior gatherings, and if you do have them, strictly apply physical distancing. The question is, if people are going to understand and respect this advice.”

Professor Patrick Berche, doctor, biologist and former director general of the Institut Pasteur, told BFMTV: “Most doctors agree that we need to lockdown, in the full sense [of the word].

“But the politicians are also considering other things; public morale, how people will comply after a terrible year, unemployment, dramatic economic consequences...And by considering all of this, they have decided to restrict [people] without locking down, while reminding people of the rules.”

Professor Berche said that the new rules would not necessarily amount to failure. He said: “We will see after two weeks. We must let the plan run its course and see what happens.”

Government defends ‘right decision’ not to confine in January

It comes after Mr Attal was also forced to defend the government’s decision in the JDD at the weekend - and its choice to not impose a full lockdown in January, in contrast to some other European nations.

He said: “If it was possible to go back to January 29, we would make the same decision. Germany has been under strict lockdown since mid-December and still is, and cases are still rising. Italy is going into its fourth lockdown because the epidemic is racing ahead.

When asked whether President Emmanuel Macron’s “bet” to not lockdown in January had “paid off”, Mr Attal was indignant.

“The expected spike in the epidemic predicted for mid-February didn’t happen. The predictions said we would be at 30,000 cases per day in mid-March, after a lockdown of a month. But today, seven weeks later, we are at the same numbers thanks to everyone’s efforts, without having to have a national lockdown.

“It was the right decision.”

He added that he believed that it would be possible to relax the current restrictions by mid-April.

He said: “When we have vaccinated sufficient numbers of at-risk people, the hospital pressure will drop, and that will give us a line of sight to relax restrictions. That is the goal, in the context of a worrying epidemic situation, worsened by the spread of the UK variant.”

New Covid rules France: Revised form, more shops to open
What you can (and cannot) do in 16 lockdown areas of France