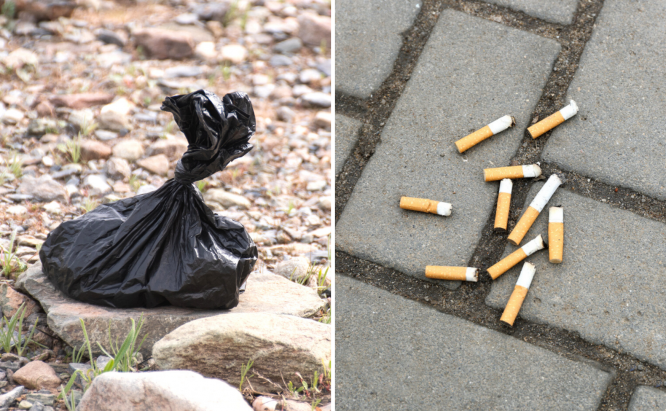 The mayor has introduced the minimum fine for each incident of waste, saying that he has “had enough” of some residents “poisoning the lives of everyone else” Pic: Laurel Powell / Africa Studio / Shutterstock

A town in northeast France has introduced a new €1,000 fine for anyone caught not picking up litter (including mess from their dog/s), cigarette butts or other waste they leave in a public area.

The mayor of Obernai in Bas-Rhin, Bernard Fischer, made the announcement during a council meeting on June 28.

The rule came into force on July 1.

Mr Fischer said: “Enough is enough, I’m fed up. Obernai is a beautiful town, maintained by 8,700 inhabitants who are exasperated by a very small percentage of individuals, not necessarily from Obernai, who leave waste.

“I remind you that a mayor died a few months ago in the Var for this same reason.”

Mr Fischer was referring to the mayor of the town of Signes, who was knocked over by a truck that was illegally dumping rubble.

Mr Fischer said that since the end of confinement, he and his colleagues had noticed “a return to delinquency”, and that they were no longer prepared to tolerate it.

He said: “It’s always the same people. They poison the lives of everyone else. When the gendarmes trace the chain, the perpetrators are given a small fine of €130 euros, which is not enough."

He added: “Despite several awareness campaigns and education, too much waste, too many cigarette butts, dog mess and other rubbish such as tires, building materials or rubble are illegally dumped in the city or in nature, with perpetrators feeling little guilt.”

He also pointed out that Obernai already has several options for the disposal of waste.

These include two dumps open to all inhabitants; a recycling and sorting system for homes; financial aid for composting equipment; free vegetation removal and burning; 260 public bins; 83 dog waste bag distributors; and around 30 glass recycling points.

It could rise to more “if the removal of the deposit, the disposal of the waste and the cleaning of the site result in an expense greater than the said lump sum”, the mayor said.

Mr Fischer has now called on the mayors of 35 other towns, from Piémont to Vosges, to introduce the same rules.

Nationwide, illegal fly-tipping or dumping of waste is punished by fines of between €135 (rising to €375 if not paid within 45 days) and €1,500 depending on the nature of the crime.

It can also lead to the confiscation of the vehicle used to transport the waste, explains government website service-public.fr.

He said: “The most common is inconsiderate parking, with a million parking tickets per year issued in Paris alone. Then we have cigarette butts thrown onto the ground, then rubbish or bulky items left on the street.

“Another one that is more common than you might think; urinating in the street. There are more than 6,000 fines per year for people who confuse the street with the toilet.

“In Reims (Marne), fighting against illegal waste costs €300,000 per year. In Tours (Indre-et-Loire), picking up dog mess in town costs €150,000 per year. So much public money that is not being used for useful things.”

Fines are often small or not enforced, he said.

10 hours ago
5
Map: in which French departments are Covid cases rising?