Limoges: Campaign makes a crime scene out of fly-tipping 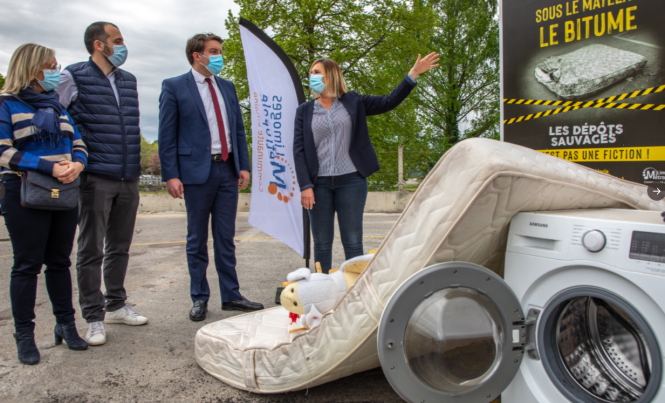 One city in southwest France is upping the ante on fly-tipping with a hard-hitting campaign making the sites of dumped rubbish into a pretend 'crime scene'.

The Nouvelle Aquitaine city of Limoges picks up more than nine tonnes of tipped rubbish from the streets every week, including old sofas and discarded refuse sacks - as well as the usual day-to-day litter - and they have had enough.

She said waste is a €500,000-a-year problem all over the city, "from the northern areas to the southern areas of the city, via the city centre, we find everything."

From the beginning of May officials in the city are trying a new approach. Rather than being cleared as quickly as possible, major deposits of fly-tipped rubbish will be transformed into crime scenes - complete with black-and-yellow tape used by police.

"The idea is to challenge people on this problem", said Ms Gentil. "Because most of the time, they don't see it. The waste is disseminated throughout the city, it is often deposited at night and removed the next day by the services. Now, we will leave it there for a few days."

As part of the campaign, ad posters in the style of well-known crime dramas will be visible across the city, reminding residents and visitors of the fines incurred by those caught fly-tipping, as well as the location of local recycling centres.

Ms Gentil said that in cities where a similar awareness campaign has been carried out, illegal fly-tipping fell 27% almost immediately.

Meanwhile, officials and local police will also step up their efforts to catch any perpetrators, including searching through tipped waste in search of clues to their identity.