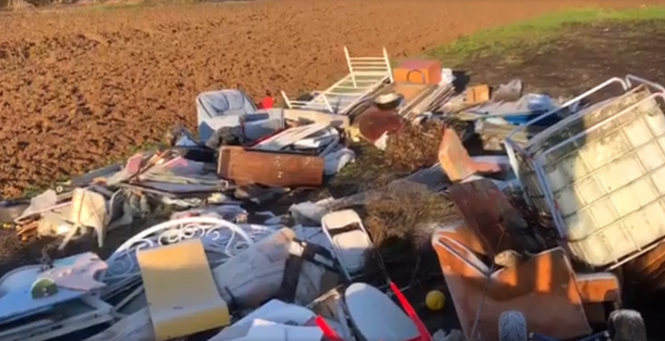 A new app has been launched in France to combat the problem of illegal waste dumping in natural areas.
By Connexion journalist

Environmental group l'Association France Nature Environnement has launched a new app called “Sentinelles de la Nature (‘Nature Guardians’)”, which will allow residents to alert the group to illegally-dumped waste in natural areas and see where in France is most affected.

The association has been gathering data on the most polluted sites in the country, shown on the app via a colour-coded map.

Mathilde Goueffon, legal expert at France Nature Environnement Paca (Provence-Alpes-Côte d'Azur), told news source FranceInfo: “You can see damage in orange, and in green are the good initiatives in the region. Here we have illegal dumping of construction waste in a natural area...here is also construction waste.

“You can already see that this [kind of waste] is the most common.”

Each time someone reports waste dumping on the app, they are invited to take photos and describe what they saw. Their report may then prompt the association to come to their aid and fix the problem.

Ms Goueffon said: “As an association, we will support citizens by giving them procedure sheets, sample letters, the right people to alert, and possibly support their approach if we see that it [initially] doesn't work.”

In extreme cases, the association is ready to invoke the law. Each year it brings 20-30 cases to court in relation to illegal waste.

One resident in Bouches-du-Rhône, named Lucien, told FranceInfo that the situation near him was becoming intolerable.

He said: “[There are] doors, pipes, a big mirror...plastic bottles of all kinds and bricks...It probably comes from small craftsmen or local self-employed people who want to get rid of materials in this simple way, because [if they use] a waste disposal centre they have to pay.”

The waste disposal site is just 800 metres down the road from this area, but people instead have started using the space as a dumping ground, even dumping waste that can be environmentally damaging and toxic.

Lucien added: "I passed by about 1.5 kilometres from here, 48 hours ago, and saw a mountain of rubble, with cement slabs [that appeared to be] full of asbestos."

The new app comes after several mayors across the country have taken direct action to combat illegal dumping of household and business waste.

In January, Christophe Dietrich, mayor of Laigneville (Oise, Hauts-de-France) filmed a huge pile of household rubbish in a field and hired a truck to “return it to sender”, after the perpetrator was identified on council CCTV cameras. He was also fined €4,000, the council said.

Last year, another mayor, this time in Côtes-d'Armor (Brittany), returned a pile of "Christmas rubbish" back to its owner, with a note reading: "These boxes, wrapping paper and leftover food [must have fallen] off Father Christmas’ sleigh when he was leaving your house. To help repair his error, I thought it would be useful to bring them back to you."

And in September 2018, a mayor in Ille-et-Vilaine reported a similar incident after a homeowner dumped rubbish including what appeared to be a large microwave.

Illegal fly-tipping in nature and beauty spots is a growing problem all over France, prompting the government to launch a range of measures in 2018 to tackle the estimated 80,000 tonnes of excess waste that is dumped in the countryside every year.