Covid France: Only 25% of AstraZeneca vaccines used to date 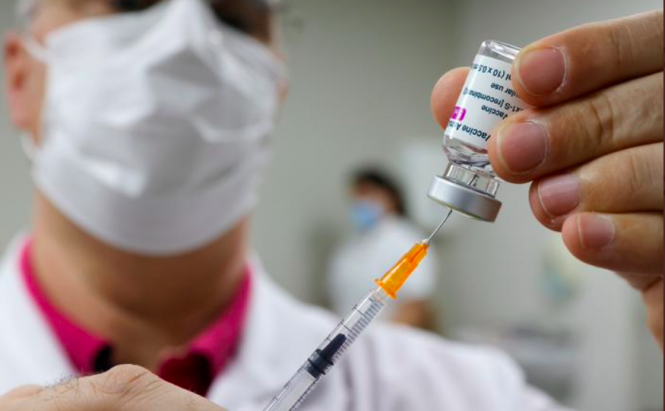 Only 25% of AstraZeneca vaccines delivered to France have been used, the health ministry said yesterday, adding that there has been a “problem” of under-use in hospitals.

600,000 doses of the vaccine were delivered at the beginning of February destined for health workers aged under 65 and vulnerable people aged 50-64.

Yet, the ministry said “we understand that we still have 75% of stocks, which have not been used for injections” .

The ministry said, as of February 28, 24-25% of [AstraZeneca] stocks had been used as opposed to 70% of stocks for the Pfizer and Moderna vaccines.

The AstraZeneca vaccine was approved for use among vulnerable people aged 50-64 in France - equivalent to around two million people - and health workers aged under 65 from February 6 onwards.

First doses of the Moderna vaccine have been given to 158,000 people – in part because the Moderna laboratories delivered 25% fewer doses than planned to France in February.

But shortfalls could have been made up by the AstraZeneca vaccine, as almost 1.8 million doses of the vaccine had been delivered to France by March 1.

Reluctance to use the vaccine is thought to be because the AstraZeneca vaccine offers an estimated 62% protection against the Covid-19 virus after a first dose, compared with 95% for the Pfizer vaccine and 94% for the Moderna vaccine.

Reported flu-like side effects from the AstraZeneca vaccine are also thought to have put people off using it.

In France some health professionals stopped administering the vaccine as a result of such side-effects.

But the AstraZeneca vaccine has been defended by health officials.

Professor Alain Fischer, head of the French vaccination strategy said: “There is no place for thinking this vaccine is a second-class vaccine, it is completely effective.”

He added that the level of protection offered rises to 82% after the second dose, if it is given after 12 weeks.

The health ministry said there should now be a “dynamic and effective dispersal” of the AstraZeneca vaccine, as GPs have been authorised to administer Covid jabs to certain groups of patients.

The number of people eligible for the AstraZeneca vaccine in France has also been expanded.

Previously the jab was approved for health workers aged under 65 and vulnerable people aged 50-64, but French health authority la Haute Autorité de Santé (HAS) has now changed these guidelines so the vaccine can also be used for vulnerable people in the 65-74 age group.

This change was made following results from a study by Public Health Scotland, which showed the vaccine was highly effective at reducing serious cases of Covid-19.

The HAS had previously decided not to use the vaccine on this age group until more test results were made available.

The ministry said: “Now we have good news about the AstraZeneca vaccine, it is imperative that this vaccine finds its place in our national vaccination strategy.”

But some GPs remain unsure that there is public demand for the AstraZeneca vaccine.

Dr Jacques Battistoni, president of GP union MG France, told newspaper Le Monde: “We shouldn’t have any illusions… we could have around 40% refusal [of the vaccine] if national surveys are to be believed.”

As of February 17, GPs in France have been able to order doses of the AstraZeneca vaccine from pharmacies, to be administered the following week.

Dr Battistoni said: “Either they haven’t had time to make a list of eligible patients, or they received extra doses and don’t need to reorder any straight away.”

Dr Battistoni said he received three vials - equivalent to 30 doses of the vaccine - in the first week, as opposed to the single vial each GP was supposed to be given.

This is causing issues among pharmacies that stock the vaccine.

Philippe Besset, president of the Federation de pharmaceutiques de France said: “Health authorities decided to give two extra vials to each of the 11,000 pharmacy dispensaries, which GPs often haven’t collected.

“And it’ll be the same this week, which means we’ll find ourselves with 400,000 doses in the fridges.”

Calls are now coming for staff in pharmacies to be given immediate authorisation to give the AstraZeneca vaccine.

Dr Battistoni said: “They already have the premises, and trained staff. They could start overnight.”

France looks at ways to speed up Covid-19 vaccine campaign

First report into side-effects of Covid vaccines in France

2 hours ago
3
French farmhouse renovation: DIY tricks to get rid of rats